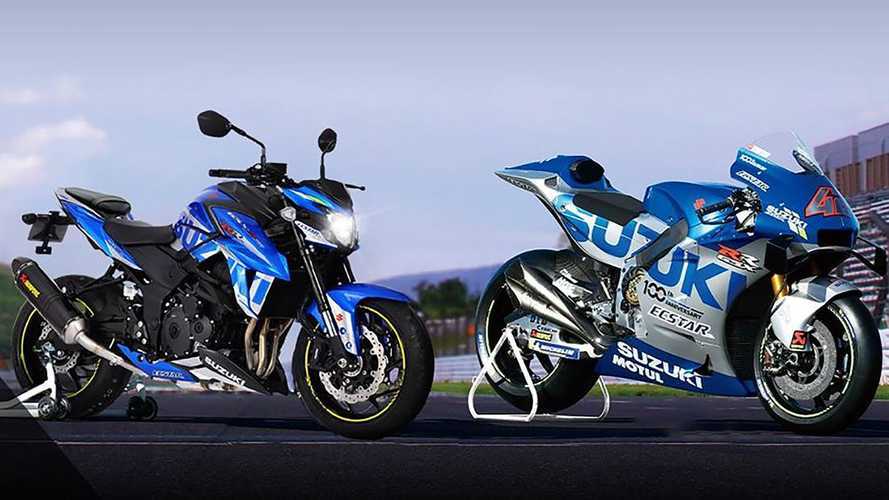 Motorcycle manufacturers participate in motorsports with the hopes that on-track success will lead to showroom success. The “win on Sunday, sell on Monday” mentality still pervades the industry with top brands releasing models borrowing elements from MotoGP and World Superbike race steeds. Whether it’s the livery on Kawasaki’s Ninja ZX-10R KRT Edition or the winglets on Ducati’s Panigale V4, companies bank on the fact that buyers want to ride like Jonathan Rea or Andrea Dovizioso.

Suzuki is no different. The house of Hamamatsu frequently releases a GSX-R 1000R with ECSTAR graphics to leverage its racing ties. However, not everyone that wants to ride like Joan Mir and Alex Rins wants to ride a fully-faired supersport with clip-ons and rear sets. Some prefer the upright ergonomics of a naked sportbike. Suzuki is catering to those folks that want speed and comfort with an ECSTAR edition of its ever-popular GSX-S750 model.

Emulating the 2020 Suzuki MotoGP bike, the GSX-S750 boasts a brilliant blue base coat with an angled silver stripe and Suzuki lettering slashing through the tank. ECSTAR branding graces the belly pan, tail section, and headlight housing and the Hi-Viz yellow wheel accents make the jump from the MotoGP motorcycles.

The livery isn’t the only update for the GSX-S750 MotoGP Replica, as an Akrapovic exhaust sets it apart from the base model. The slip-on is a nod to the custom Akrapovic system used by the ECSTAR team, further associating the street bike with the race machine. In honor of Suzuki’s 100-year anniversary and 60 years in racing, the GSX-S750 also receives a special edition tank pad commemorating the brand’s competitive heritage.

Unfortunately for us North Americans, the special edition GSX-S 750 is only available in France for the time being. Suzuki Moto France set the base price for the model at €9,449 ($10,655). With an MSRP of $8,499 for the standard GSX-S 750, that’s a considerable chunk of change to pay for an Akrapovic can and MotoGP-inspired paint job, but you can’t put a price tag on feeling as if you can ride like Rins or Mir.