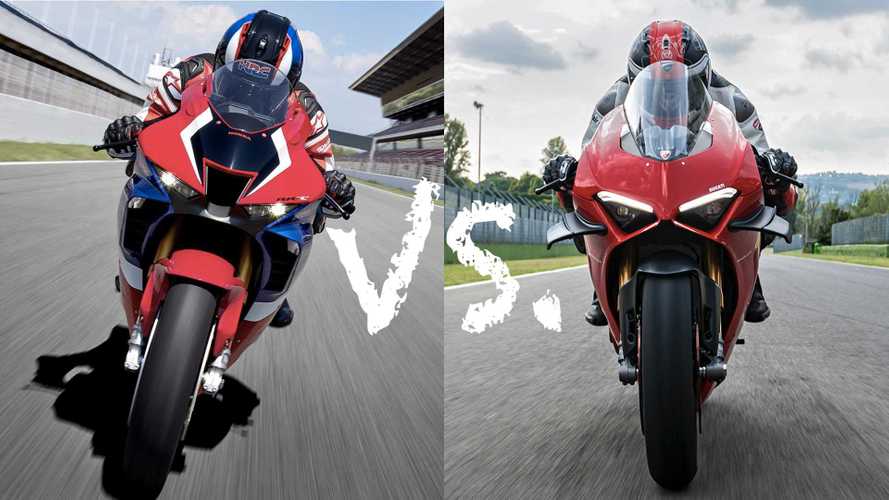 This week’s spec showdown pits two of the biggest names in the super sportbike game as we find out how the a two-wheeled Godzilla measures up to an Italian stallion.

We wanted a worthy opponent for the newly-introduced Honda CBR1000RR-R Fireblade SP, and the Ducati Panigale V4 is a prime choice. So, in the blue corner, we have the new hard-hitting Honda. In the red corner, we have the hot-blooded Panigale. Let’s get ready to rumble.

While there’s a 100cc difference between the Japanese inline-four mill and the Italian Desmo V4, the two offer very similar performance figures. The Fireblade produces slightly more horsepower (a lonely little pony) but the Panigale produces more torque and it's lighter. In fact, despite a minimally smaller horsepower figure, the Panigale offers the best power-to-weight ratio at 0.491 versus 0.485 for the CBR.

Neither manufacturers provide official top speed numbers so we turned to YouTube to get an idea of how fast the two track monsters can go. The number of people recording themselves going at ludicrous (and hopefully not illegal) speeds is quite impressive but for us, it’s also tremendously informative.

For the Honda, Japanese site Young Machine shared footage from a camera mounted behind the bike’s dash. We get to see the rider reach a speed of 299 km/h or 186 mph. Despite the speedometer maxing out, we can see the rpm needle make its way up the gauge and we can hear the engine continue to accelerate.

The same thing happens for the Ducati. To get an idea of the entry-level Panigale’s speed, we turned to a first-person video from Blinz Racing TV in which the rider manages to reach a speed of 298 km/h—or 185 mph in American—before the speedometer goes blank. Just like with the Fireblade, even though the person has reached the maximum speed the manufacturer seems willing to advertise, the rpms continue to soar as the engine’s pitch becomes increasingly higher.

With that in mind, we know with relative certainty that both bikes are able to go faster than 186 mph; we just don’t know how much faster. We don’t have any official or unofficial numbers to confirm it so we have to go with the information we can reap from the video.

While output and power are the most interesting numbers to look at on sportbikes, considering we have two models that cost as much as a car, it’s also nice to what $20,000-$30,000 will get you into consideration.

For the Fireblade, Honda borrowed the chassis and the engine from its MotoGP championship-winning bike, the RC213V. The engine is designed to be compact—which makes it lighter and easier to position within the frame—and features titanium connecting rods, forged aluminum pistons, and finger-follower rocker arms. The cylinders’ bore and stroke are also the same as the RC at 81mm x 48.5mm and the compression ratio is 13.0:1. The engine is teamed with a six-speed transmission with quick shift technology.

As for the chassis, Honda used a lightweight aluminum twin-spar frame with improved vertical, horizontal, and torsional rigidity paired with a longer swingarm than on the standard CBR meant to increase track handling. Aerodynamic winglets—or curtains—are integrated directly into the bike’s fairing to generate a downforce proportional to the speed. The bike is mounted on a set of 17-inch wheels.

Ducati opted for an aluminum alloy chassis complete with an aluminum single-sided swingarm, mounted on a pair of five-spoke light-alloy 17-inch wheels. On the Panigale, the aerodynamic winglets sit on top of the fairing—almost like mandibles.

The Italian firm introduced its Desmosedici Stradale V4 engine at EICMA 2017, a block that’s also inspired by MotoGP technology, only slightly bigger by 103cc. The cylinders have a bore and stroke of 81 mm x 53.5 mm and the engine’s compression ratio is rated at 14.0:1. Firing order has been determined to reproduce the sound of the racing Desmosedici with the two left cylinders and two right cylinders firing almost simultaneously in a pair to create a twin-pulse effect. Like the Honda, the Ducati also features a six-speed transmission with quick shifter.

The biggest difference between the Fireblade and the Panigale is where they fit in their respective lineups. The CBR1000RR-R sits at the very top of the Honda sportbike family while the V4 is the entry-level model, before the V4 S and V4 R. For the price of the Fireblade, you can get your hands on a Panigale V4 S—which is a lithger version of the Panigale that tips the scales at 430 pounds and gets you an even better power-to-weight ratio of 0.5. What we’re getting at is that for a smaller price tag, you can accessorize a Panigale and still get a better deal than with the Honda.

What Honda has to offer, however, is unparalleled quality and a reputation for reliability. This isn’t to say that Ducatis aren’t top-notch quality but they tend to be more fragile and finicky. Honda consistently puts out good, reliable products, and while the Fireblade is brand-new, we can only suppose it received a similar—if not a superior treatment than the rest of the lineup.

Both the Honda CBR1000RR-R Fireblade SP and the Ducati Panigale V4 are beautiful, elegant, striking, and aggressive machines. Their power figures and specifications are very similar and while the two models are track-ready for those days you feel the need for speed, the manufacturers say that they are also easy to manage when duty calls and all you need is some mild commuting.

How do you choose? We’re afraid you’ll have to go and take them out for a spin to figure that out because on paper, both have a lot to bring to the table. I know, that's terrible news. Don’t worry, whether you choose Godzilla or the Italian Stallion, heads are going to turn and curiosity will be piqued. Either way, you won’t go unnoticed.