This Piaggio Ape Limousine Is Your Perfect Grocery-Getter 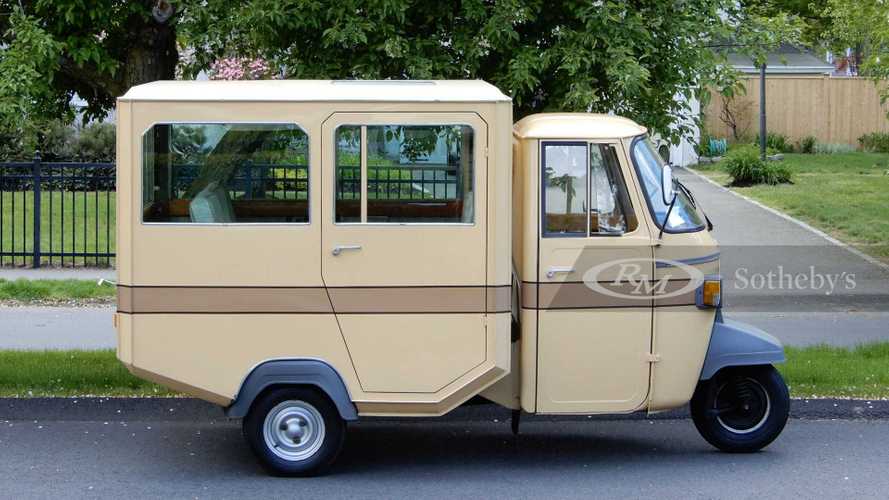 Don't call it an Italian tuk-tuk.

We don’t get to talk about over-the-top coachbuilders very often here at RideApart. Bike customizers are more our bread and butter, and the sky’s totally the limit there. Today, though, we’re gonna have to have a serious talk about La Carrozzeria Fratelli Pavesi Milano, who built this sweet 1978 Piaggio Ape Limousine that’s about to go up for auction in May 2020.

Yes, you read that correctly. A Piaggio Ape Limousine, built for “a Mr. and Mrs. Agusta” as a boat tender, according to the official Sotheby’s auction listing information. As near as we can tell, the timing doesn’t work out for this to have had anything to do with Count Domenico Agusta. Could it have belonged instead to his brother, Corrado Agusta? We don’t know for sure, but we can say that it’s at least not a temporal impossibility.

Anyway, back to Pavesi. The coachbuilder was founded in Milan way back in 1929, and built up a steady reputation over the years for throwing wood, opulent interiors, leather, wool, and basically any and all luxury refinements at its builds. Ferraris, Maseratis, Minis (including Mini Mokes)—the coachbuilder was brand-agnostic, and if you had the scratch, chances were good you could have the luxury vehicle of your dreams built by this shop.

Thus, this stretch Piaggio Ape. It features its original interior, and looks as though it’s kept remarkably well over its 40-plus years of life. It retains its stock 600cc engine, but like all other limos you’ve probably ever seen, there’s a little window that separates the guests from the driver. The passenger area seats five in plush ‘70s style, and there’s a little intercom in the passenger compartment so that you can talk to the driver. Presumably, this means that the little window between the two compartments doesn’t slide open. I mean, what is this, a Piaggio taxi? Not hardly, son.

It has just under 12,000 kilometers (or 7,456 miles) on the clock. As you can see from the photos, it’s held up remarkably well for its age, with the undercarriage looking pretty clean and rust-free. If you’re interested, it’s scheduled to be part of Sotheby’s upcoming online-only auction event called Driving Into Summer. The bidding takes place from May 21 through 28, 2020, and it’s being offered with no reserve, but is expected to fetch between $45,000 and $60,000.