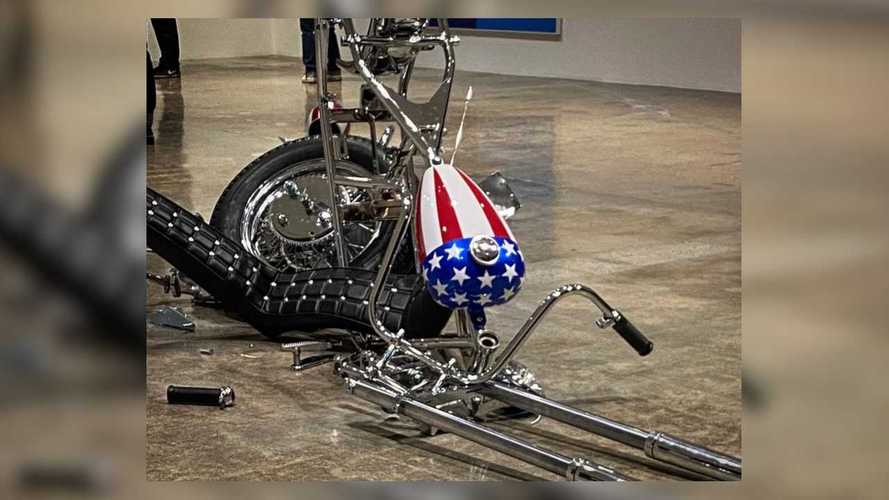 A movie is never just a movie.

Do you ever find yourself looking at old photos, movies, or news footage of important events, and wondering what it would have been like to be there? Most of us probably have. For some people, that’s as far as it goes. If you’re conceptual artist Hank Willis Thomas, you don’t just contemplate it—you shape it into being. Through vision and hard work, you pull that perception out of your head and put it out into the world for all to see.

Art Is All Around:

Thomas’ most recent solo exhibition, An All Colored Cast, is on display at the Kayne Griffin Corcoran gallery in Los Angeles through March 7, 2020. Throughout his career, Thomas’ work has concentrated on perception, identity, media, pop culture—and starting conversations. Reframing narratives we might think we know, and showing us new angles we might not have seen before.

I recently had the chance to talk with Thomas about his shattered bike sculpture, Not So Easy, which is part of this current exhibition. For anyone familiar with the stories of Cliff Vaughs and Ben Hardy, who designed and built the Captain America and Billy bikes famously ridden in the film Easy Rider, this work is both unmistakable and visceral. Neither Vaughs nor Hardy’s contributions to this iconic piece of American pop culture were properly acknowledged until the late 2000s. Considering their impact on motorcycle culture in the decades since, it’s hard to view that as being anything other than a major slight.

“From what I understand, part of the making of [the movie] was when Clifford Vaughs met Dennis Hopper, and then Peter Fonda, they kind of bonded around biker culture. Especially around the kind of multicultural and also multi gender kind of free style of a lot of people in that culture,” Thomas said.

“And then, with the making of the movie, Hollywood decided to tell a story that it felt like Hollywood could tell, and the first thing to go was Black people. But I also think women were put in the frame in a very one-dimensional and non-dimensional way. I think you could say that’s true for most of cinema in those years,” he continued.

“I was really interested in kind of learning a little bit more and highlighting that story. Doing a sculpture, kind of based off that famous Danny Lyon photograph of Clifford Vaughs. Have you seen this piece that I did, called Looking For America?”

At the time of this interview, I hadn’t. I have now, and I’ve linked someone else’s writeup of it above, which includes images so you can see it as well. It’s an arresting bronze sculpture—and even though I’d seen the Lyon photograph before, I don’t know that I would immediately have placed the influence if I’d seen the sculpture without context. Then again, that’s a thing that Thomas consistently seeks to do with his art—recontextualize and reframe our perceptions.

“I made a sculpture based around that photograph, because I’ve always been interested in what it would be like to be there during certain moments—you know, iconic events. And I couldn’t believe that the same man in this iconic civil rights photograph was the same man behind the Captain America bike, ironically, from the movie Easy Rider, where Black people are all but absent,” Thomas continued.

“In [my] show, you also see the General Lee [from the Dukes of Hazzard TV series]. It’s a short leap to see that the Dukes and General Lee with this confederate flag on a 1969 car might have a connection to this 1969 movie bike with this American flag on it—both were about two good ol’ boys, never meaning no harm and trying to make their way.”

“I kind of realized that there’s a legacy of the film in our psyche that is kind of ignored. Its connection to the exploitation of Black labor, and kind of ignoring everything, so to speak. Even if it was not ill-intentioned—that might just kind have been how it went—the deconstruction of the bike was a gesture which we wrestled with, because is the bike itself the object? What does it mean to deconstruct a bike like that?”

“That does allow us to talk about some of the origins of chopper culture after World War II, and for veterans who wanted to have mobility, and started to piece together bikes as a way to get around the country and have access to the American dream. There’s a lot embedded in this piece, I guess you could say, for me.”

“I think for a lot of African-Americans returning from the war, who were so marginalized, Harley-Davidson meant something. And that’s—we don’t even think about Black and Latino culture being central to the origins of biker culture in our country,” Thomas said.

No, it largely gets overlooked, I responded.

“Beyond ‘overlooked,’ [the reaction is] kind of like ‘For real? Are you kidding?! Nooooooo,” Thomas said, in a tone of disbelief. “And that’s part of what I wanted to highlight with the work, how easy it is for Hollywood narratives to just erase major narratives and also create new ones.”

“And I always think about what else am I buying into when I buy into narratives that were designed to keep us ignorant, or make certain people seem like heroes, and other people seem irrelevant, or like they’re villains.”

You can learn more about the Kayne Griffin Corcoran gallery, An All Colored Cast, and how and when you can visit the exhibition here.