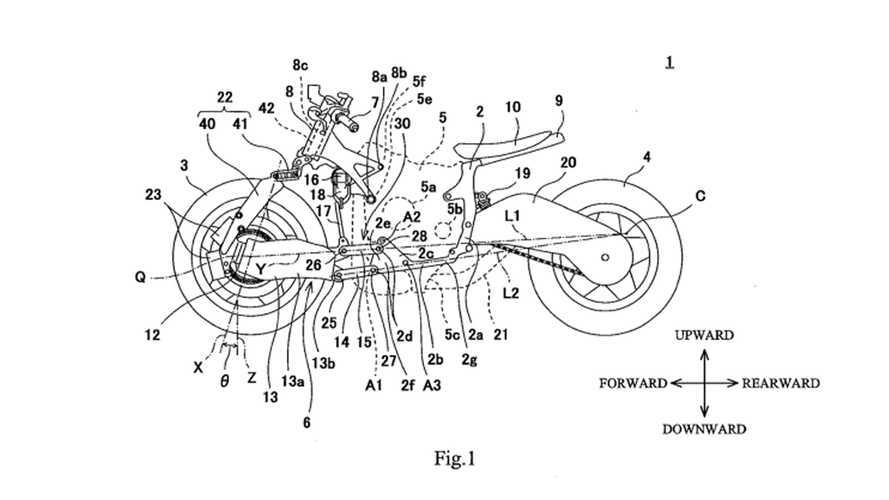 Kawasaki and Bimota took everyone by surprise at EICMA 2019 when the companies unveiled the result of their first collaboration, the Bimota Tesi H2. The stunning sportbike will hit the road sometime in 2020, marking Bimota’s official return to the market. Aside from its striking design and the Kawasaki supercharged engine at its core, we also notice the absence of a traditional fork at the front of the bike. Bimota is no stranger to front swingarms and hub-center steering, but it looks like the Tesi has now inspired Kawasaki to come up with its own forkless design.

Engineering At Its Best:

A patent published at the beginning of February 2020 suggests that Team Green is studying a motorcycle chassis featuring a front swingarm. Despite Bimota’s readily available hub-center steering design, Kawasaki has apparently decided to come up with its own version of the quirky suspension. The design details how the front swingarm would be attached directly to the frame using a set of swiveling, bracket-like links.

Four swiveling links would attach the swingarm to the frame.

The design isn’t just an original take on front suspension. The document also describes how the solution is cost-effective as well: “It is therefore an object of the present invention to provide a front arm-equipped straddle vehicle that allows easy reduction in manufacturing cost.”

While the patent describes the frame and the suspension system in detail, the engine isn’t discussed at length other than to indicate its positioning within the chassis. The designs don’t show the engine either, so there is no way to know whether Kawasaki plans to follow the Bimota blueprint and throw its supercharged H2 engine into the mix—provided the patent doesn’t fall into the abyss of forgotten designs.

For now, we will get to see how well the Tesi H2 is received once it goes for sale later in 2020. Maybe that’s the bit of information Kawasaki is waiting to collect to decide of the future of its own design.