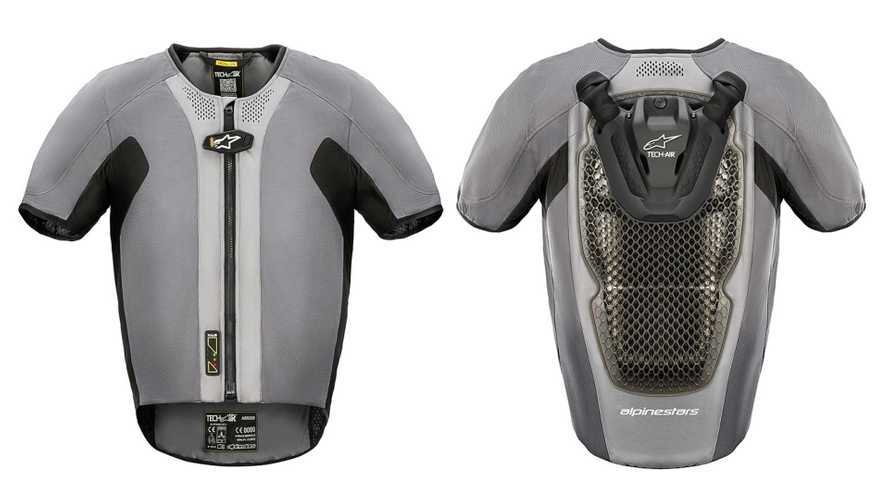 The selection of airbag-equipped gear is becoming increasingly more interesting. The two biggest players on the field, Dainese and Alpinestars, are competing to offer the best-performing and most efficient airbag protection system on the market. That’s not a bad rivalry to have if you ask me. Alpinestars kicked the new year off with the launch of its version of a new standalone airbag vest that will fit under pretty much any riding jacket. Let’s have a closer look.

Before the product’s launch, the manufacturer seemed adamant that the vest could only be used under textile jackets. The press release now clarifies that the Tech-Air 5 “can be worn under any proper fitting textile jacket or Tech-Air compatible jacket, or any leather jacket with 4 cm of space around the circumference of the rider’s chest.”

On its website, Alpinestars adds that riders must ensure their jacket is loose enough to allow the airbag to inflate properly. Translated: you’ll be ok as long as you’re not the tight-fitting leather type of rider.

The system uses six integrated sensors (three gyroscopes and three accelerometers) as well as a crash algorithm to determine when the trigger needs to be pulled. The bag inflates in 20 to 40 milliseconds depending on the airbag size. Alpinestars claims on its website that the airbag can reduce the force of an impact by up to 93% compared to a passive protector (the press release says 95%, but you get the idea).

After putting the vest on and zipping it up, the magnetic snap activates the system and a row of LED lights indicates its status. It uses a lithium-ion battery good for 30 hours of use. When the battery is low, just plug your vest in using the micro-USB cable provided to charge it. Users can also download the Tech-Air App that allows them to check on the battery status, track their rides, and even update their airbag system.