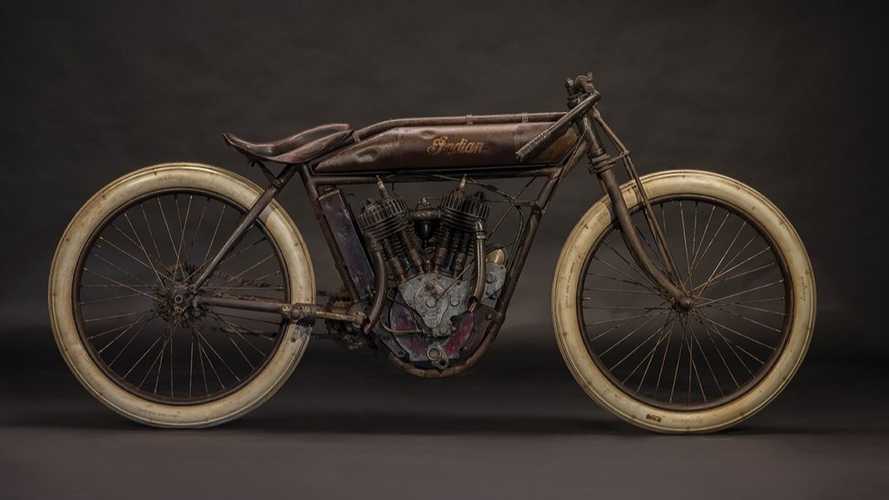 Few of us can afford it but that doesn't mean we can't look at the pictures!

Friends, every once in a while, a chance comes along to own a piece of motorcycling history, and for those of you who love very old motorcycles and motorcycle racing of every kind, this might be your chance.

Up for sale through Heroes Motors of Los Angeles is a 1919 Indian Power Plus, and not just any (very) old motorcycle. It was a board track racer in its day and raced at the Los Angeles Motor Speedway.

Heroes Motors has limited information on the machine, except that its owner moved from the United States to France with this bike after World War II, and the machine was then sold to, and stored in, a museum in France from the 1970s through the 1990s. The current owner bought the bike from that museum. It remains in unrestored condition (though some of the leather pieces like the seat have been replaced).

There is no price listed on this motorcycle. It definitely falls under the “if you have to ask, you can’t afford it” clause, but as with every single other motorcycle on the Heroes Motors website, the pictures are amazing and worth a look even if you’re not currently in the market.

The Indian Power Plus, while a throwback now and certainly bearing little resemblance to modern motorcycles, was well ahead of its time. It was truly a marvel of engineering. Indian employed engineers as well as their factory racers to design the engines and frames of these bikes. These were the machines that set speed and distance records in their day.

The oval board track racers regularly saw speeds of 100mph and better, which is pretty impressive for a machine that put out just a hair over 15hp. The demons who rode them did not have the benefit of modern safety gear but instead donned leather helmets, and their clothing sometimes had wooden armor. This didn’t help a whole lot when a crash occurred on the speedway, where riders would sometimes (gird your loins here, friends) end up with twelve-inch splinters from the wooden track.

Fire up your imaginations; can you begin to believe what these races must have been like?