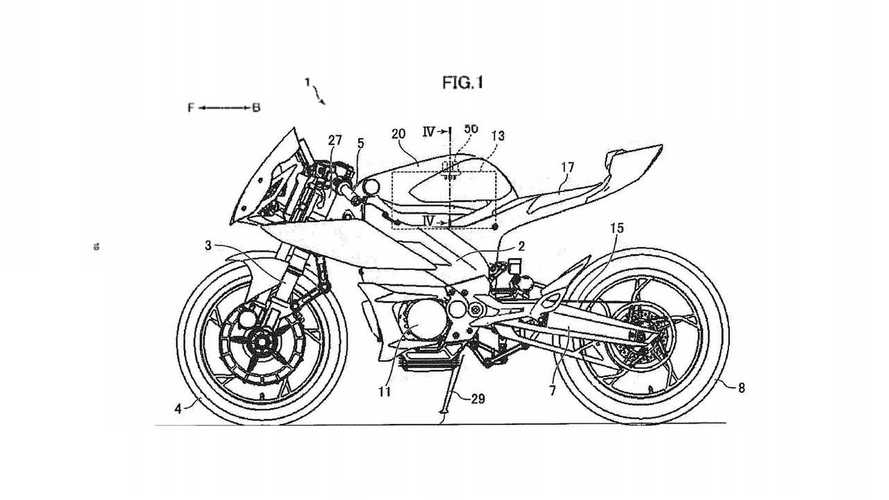 The designs reveal a handful of possible locations for the charging port.

Over the last year alone, it's become abundantly clear that electric bikes will play a massive role in the future of motorcycling. It's only a matter of time until electrics surpass gas-powered machines in performance, powertrain production costs reach a low enough figure for profit to be viable, and public acceptance increases enough to the point where ebikes are the objectively superior offering. And though we aren’t there quite yet, we’re damn close—something major manufacturers are well aware of.

While Yamaha does offer a handful of fully-electric scooters and pedal-assist bikes, the Tuning Fork brand has yet to release an electric production motorcycle. The Japanese firm has pulled the cover off a few noteworthy electric prototypes in recent years—two of which are supposedly slated for eventual production—though patents filed by the company suggest it’s working on chambering an electric model for when the time is right.

The freshly unearthed filing with the European Patent Office demonstrates that the Hamamatsu manufacturer is experimenting with where to position the charging port on its forthcoming e-model. The majority of existing electric models haven’t strayed much from the traditional “juice goes in the top of the tank” style motorbikes have employed practically since their inception. While this setup undeniably has merit on gas-powered mounts, it’s far from the most practical possible location for electric mounts.

Yamaha’s patent depicts a couple different potential charging point setups. The first is a novel take on the traditional top-tank filler-cap location. Instead of sitting dead-center at the top of the bike, Yamaha’s arrangement sees the port slightly offset to the right side of the tank, allowing the charging port to be facing straight up when the bike is leaned over on its side-stand. Another nifty configuration in the patent shows an LCD/TFT-style digital display that flips up/swivels to reveal a charging port on the back. The most obvious format in the new patent reveals a charging port hidden beneath a flip-up passenger pillion—not unlike the setup currently used on Energica’s wares—on what looks like an electric version of Yamaha’s MT-07.

Arguably the most creative layout shown in the patents is a setup where the port is housed at the nose of the bike, seemingly integrated into the headlight assembly. The image clearly shows a previous-gen R1, though this is obviously just a placeholder for now. While’s there’s still no release date of any kind for when Yamaha may debut its first proton-powered motorcycle, you can rest assured that it’s on its way.