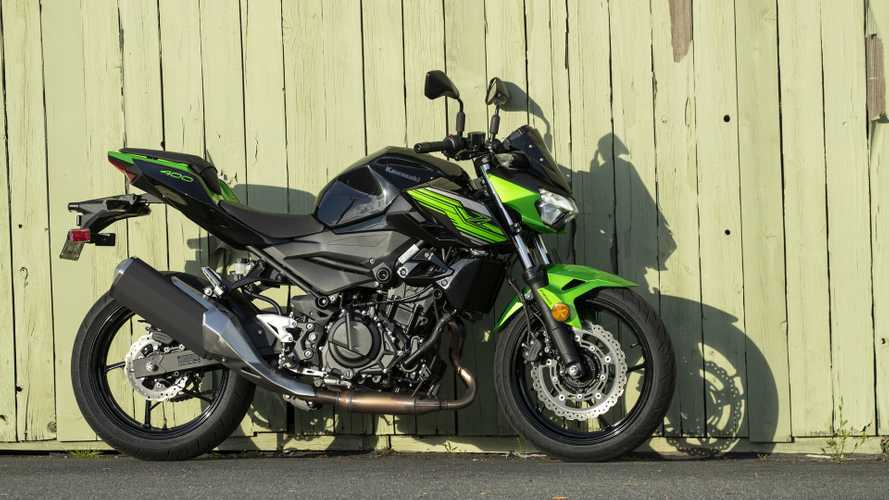 “Welp,” I said to myself as I hurtled down the steepest road I’d ever ridden into a sharp, decreasing-radius, left-handed hairpin turn. “I guess this is how it ends!”

The sign at the top of the mountainside road outside Fallbrook, California, read “Very steep grade” and it wasn’t kidding. By the time I got to the hairpin, I was in second gear, going probably 40 miles per hour and engine braking for my life. At the apex of the corner, there was only a short length of Armco between me, a thousand-foot drop into the valley, and a one-way ticket to Valhalla. Once I got there though, the training took over. I looked through the turn, picked my line, gave the merest of steering inputs, and just like that, the bike flicked over and I swept through the corner no sweat. That’s the story of how Kawasaki’s new 2019 Z400 saved my life last week.

Okay, "saved my life" may be a bit of a strong statement, but I stand by it. See, the Z400 is an incredibly forgiving machine. So forgiving, in fact, that it made up for some of the, shall we say, vagaries in my riding style and kept me firmly planted on the road instead of going headfirst over the handlebars and into a cactus patch. With this bike, Kawasaki hits on just the right mix of engine, transmission (especially the clutch, we'll get to that in a sec), suspension, and ergos. It's a tight, tidy, extremely competent package that slots perfectly into the company's Z family between the tiny, mighty Z125 and the middleweight Z650. How tight, tidy, and competent? Well, let's talk about it.

First, before I get into the nitty-gritty, I want to discuss the mechanicals. Essentially a Ninja 400 in its altogether, the Z400 is powered by Kawasaki's 399cc, water-cooled, four-stroke parallel twin. The engine breathes in through a cavernous, downdraft airbox—which makes a beautiful intake noise under load—and fuel is provided by Team Green's proprietary digital fuel injection system. The transmission is a six-speed unit with closely-spaced cogs and a clever positive neutral finder that allows a rider to easily find neutral from first gear without the clutch.

Speaking of, the clutch is a little marvel that combines both assist and slipper functions in a small, lightweight package. The assist function uses rotational forces generated by the clutch hub and pressure plate to squash the clutch together during acceleration. This, combined with light clutch springs, makes for a lighter feel at the clutch lever and gives your left hand a much-needed break. The slipper function—the bit that saved my life on that downhill stretch I mentioned earlier—allows the clutch to slip and shed power under heavy load. This prevents things like the rear wheel bouncing around when, say, you've shifted down a gear too far while engine braking on a seep downhill.

All this goodness is wrapped in a stiff trellis frame—in which the engine acts as a stressed member—distantly related to the one used in the bonkers Ninja H2. A 41mm standard fork springs the front end, and the lightweight box-section swingarm out back is sprung by a bottom link Uni-Trak monoshock with adjustable preload. The brakes are a single 310mm rotor with a two-piston Nissin caliper up front and a single 220mm rotor aft with the same two-piston caliper. On the ABS model, the one we were all mounted on, the brakes are controlled by a compact Nissin ABS controller.

In the looks department, the Z400 carries on the Z family's sugomi design language. Sugomi, as you surely know, is more than just a design language. According to Kawasaki, it's a way of life. Loosely translated, the term sugomi describes the look of a predator crouching to spring on its prey. It's a shorthand used to describe the minimalist, aggressive styling that defines the Z family's looks. You see it here in the Z400 with the tiny headlight nacelle and fly screen, the deflectors on either side of the tank, and the narrow tail section. The paint selection is limited to green on black and red on black (on the ABS model) with angular Z family graphics. While the red is nice and all, I prefer the green because If I'm going to ride a Kawasaki it's going to be green, knawmean?

As for ergos, the Z400 has a relatively upright seating position with everything in easy reach. The bars are wide and provide more than enough leverage to toss the bike around. Also, curiously, their width was chosen in part to make lanesplitting easier. I did a fair amount of lanesplitting on this trip because, well, when in Rome and all, and I can attest to the fact that the bars aren't too wide or too narrow, but just right. The cockpit is clean and smart with a nice mixed digital/analog instrument cluster and well laid-out handlebar controls. My only real complaints about the ergos are that the stock seat is a bit too thin for me and my inseam (there's a thicker accessory saddle that raises the seat height) and the mirrors are, like the mirrors on all modern bikes, worthless and in desperate need of longer stalks.

Okay, now that that's out of the way let's get to the good stuff. We set out from Temecula, California, on a bright and sunny Wednesday morning. Unlike my previous trip to southern California for the Yamaha R3 launch, the weather was perfect. Our first stop was downtown Temecula where we did some laps around a couple city blocks for photo purposes. Unfortunately, some pearl-clutching NIMBY killjoys called the cops on us because they couldn't tell the difference between a bunch of media nerds on small-displacement sportbikes and the Hells Angels. First a motor cop on a big BMW police interceptor showed up, then another in a Charger came to rain on our parade. Nothing happened, and we all had a laugh about it with the cops, but it was an inauspicious start to our day.

Thankfully, that was the only blemish on a great day of riding. Our route took us through some of the most technical roads I've ever ridden and really showcased the Z400's handling. I left my rear suspension at its stock setting and never wanted for softness or stiffness the entire day. Southern California's rainy season was extra rainy this season, and there was a surprising amount of dirt and gravel in some of the turns. There was even water over the roadway in a few low-slung dips. The Z400 took it all in stride, though. In tight corners and broad sweepers, the bike inspired confidence and even encouraged a bit of thrashing and rough handling. I chalk that last part up to the sugomi.

After lunch, we sped up Palomar Mountain to take in the views and get some more photos. Once again, as I had been the entire ride, I was dead last. I am, decidedly, not fast and the roads in SoCal are very different from my rustbelt roads. Of course, Kawasaki partnered me with a handful of professional racer-journalists because they have a sense of humor. So, while I was out there doing my James May impression and pussy-footing around the corners, the rest of the guys were already at the staging area with their helmets off getting their social media time. Whatever, they may have gotten there quicker but I saw more!

After the stop at Palomar, we did one last stretch of technical riding before hopping on Interstate 15 and blasting back to Temecula. The Z400 did very well on the freeway, but I found it less suited to this kind of straight-line, high-speed riding than it was to the canyon carving we did earlier. It was, well, buzzy at 70-ish miles per hour and reminded me a little of my wife's old '79 KZ400. It wasn't bad, but it also felt a little rougher around the edges at speed than the R3 I rode in January. Also, I have to admit, I expected a little more out of the 400cc mill.

I know it's not entirely fair to compare the two since they're not exactly competitors, but I'm going to anyway since I just rode the R3 on the same(ish) roads I rode the Z400 on. Where I was surprised by the 300cc Yamaha, the 400cc Kawasaki mill was more competent than surprising. With the R3 I was like, "Holy crap, this is a 300?" and with the Z400 I was all, "Yep, this sure is a 400cc bike." Like I said, it wasn't bad by any stretch of the imagination, I think I just expected the Z400's performance to wow me more than it did.

So, my opinion? I give the Z400 a solid B. Kawasaki calls it a "beginner" bike, but after spending a day with it and flogging it for 200-ish miles I found it to be very complete and competent, something I'd keep in my garage for a long time. A smaller rider, or someone who commutes during the week and enjoys a little light canyon carving on the weekends, could live with the Z400 for years and not find it wanting.

The Z400 is eager, competent, and a bit unrefined—like a busy, aggressive, fun-loving terrier. Not unrefined in a fit and finish way, but I think that by building to a price point (which isn't a bad thing) and in keeping with the whole aggressive naked bike sugomi thing, Kawasaki neglected to smooth out some of the bike's rougher edges. The throttle, for example, is extremely binary and, on occasion, feels like a light switch. It's also, as I mentioned earlier, buzzy at speed. Oh, and there's no good place for your right heel. It's either on the pipe or your foot's at a weird angle.

These are minor inconveniences and not deal breakers, though. Overall, Kawasaki's new lightweight naked bike is a little treasure. It's a small, solidly-built bike that's fun, agile, relatively fast, and good looking into the bargain. If you're looking for your first bike, or a second bike for general thrashing, I can recommend the Z400. Let the good times roll, indeed. 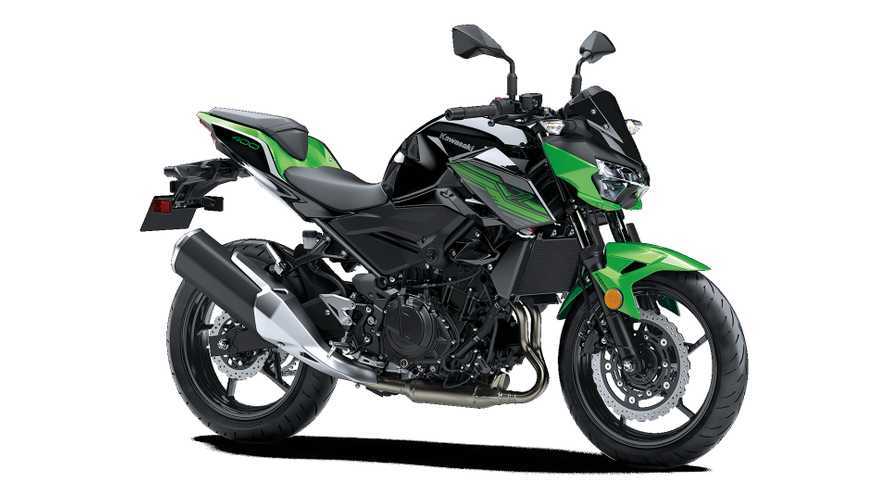