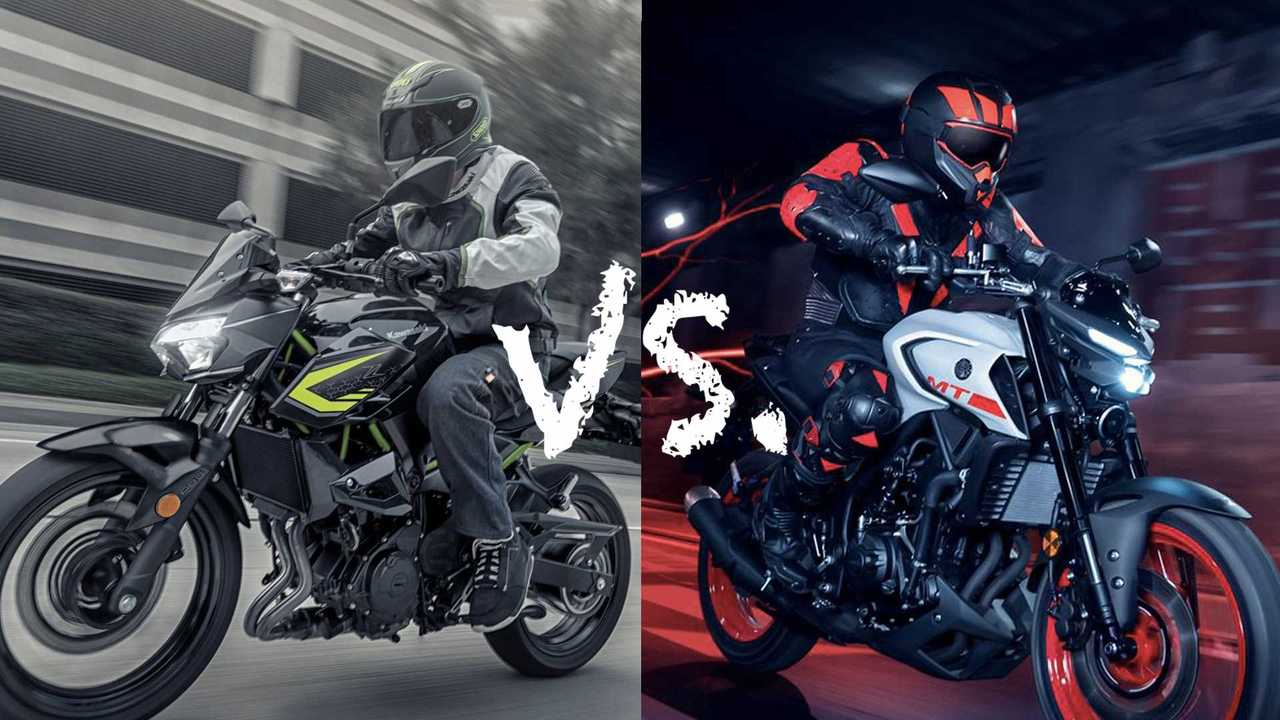 Small bikes are great to get your start on and to nail your “Riding 101” lesson. Once you become more confident in the saddle, however, they also often lose their appeal. Thankfully, some manufacturers decided to do things differently and create entry-level models that are easy to grow with and that even have enough pep and personality to entice more experienced riders.

We decided to take a look at two models that perfectly embody the concept of a beginner bike you won’t get tired of. Because it’s new to the North American market for 2020, we chose the Yamaha MT-03 as one of our contenders. We then had to find a worthy opponent for the little Master of Torque. It turns out that Kawasaki also has a model that fits the bill; the Z400. Despite the difference in displacement, the Yamaha is not afraid to flex its small streetfighter muscles and show the bigger Z it can pack a punch. Here’s how the two compare on paper.

Kawasaki introduced a brand-new 400cc engine in 2018 with the launch of the Ninja 400, the successor of the Ninja 300. The new and improved engine upped the little Ninja’s performance while lowering its weight, resulting in a far superior model that was well received on the market. Making the most of its successful new powertrain, Kawasaki launched the stripped down Z400 the following year, in 2019. It used the same engine as its faire sibling, but featured a modified chassis adapted to its bare body style as well as more relaxed riding position. The output was even slightly increased (by one horsepower) in the process and, without a fairing, the Z was even lighter than the Ninja by a few pounds.

Meanwhile, Yamaha introduced a slew of updates to its own small-bore warrior, the YZF-R3. The improvements included redesigned components to improve comfort and handling, more aggressive ergonomics, and a new fairing that matched the rest of the R family. The engine itself carried over unchanged which wasn’t much of a surprise: that little 321cc mill is surprisingly good and capable. Considering the R3 is one of Yamaha’s best-sellers in the U.S., the whole “why change a good thing” concept certainly applied here. Don’t be fooled by its displacement—the R3 pulls its weight and is a lesson in making a small bike feel more muscular than it truly is.

At the end of 2019, Yamaha announced it would also refresh its small Master of Torque, namely the MT-03. Along with the upgrade came another exciting news: the model would finally make its way to North America. Considering its main competitors—Kawasaki and Honda—both offer faired and naked variants of their smallest street bikes, it was about time Yamaha did the same.

Despite a 78cc difference in displacement, the Z400 and the MT-03 offer similar power figures. Yamaha U.S. doesn’t disclose the MTs official output numbers, but its European counterpart has nothing to hide and discloses that the model produces a healthy 41 horsepower and 22 lb-ft of torque. That’s a spec below the bigger Z400 but a respectable performance nonetheless. The Z400 shines with its lower weight and higher output—the perfect combination for optimal performance, even in a small bike.

Design-wise, the two naked sportbikes feature similar looks with the pronounced “S” silhouette and upswept tail. The headlamp cluster looks bulkier on the Z with the big, butterfly-shaped light, crowned with a small cowl.

The Yamaha MT design language is more futuristic and alien-like across the board and is particularly striking on the MT-03. Its three-section light cluster with a main, square LED light pod topped with two raptorial-looking slits makes the small naked stand out.

Both models feature a dual exhaust pipe running along the engine’s belly and ending in a single muffler. While the tip is bigger and longer on the Z400, masking the wheel, the MT’s is smaller, better adapted to the size of the bike. The Yamaha’s aggressive silhouette is nicely complemented by the belly pan’s sharp lines that give the bike a more finished look and hide the piping out of sight.

Though there is less than an inch difference between the two wheelbases (53.9 inches for the Kawasaki versus 54.3 inches for the Yamaha), the fact that the MT is overall longer than the Z at 82.3 inches versus 78.3. makes the Kawasaki look more compact, as though it’s been slightly squished.

One feature the 400 offers that the 300 doesn’t is a backrest for the rider. The two bikes are designed with separate rider and pillion seats, however, on the Z, the shape of the pillion seat provides additional padding for the rider’s bottom and lower back.
Yamaha and Kawasaki also played the color accents differently, with Team Green opting for a contrasting lime green frame coating and Team Blue opting for bright, in-your-face red wheels.

There’s a small $400 price difference between the Yamaha MT-03 ($4,599) and the Kawasaki Z400 ($4,999). They are so similar on so many levels that choosing one over the other boils down to a look preference and to whether or not you have $400 to spare should you prefer the Kawasaki.
Because they’re both entry-level models, the list of features is on the short side. No need for elaborate electronic systems and rider aids, especially not if you want to keep the price competitive. At under $5,000, we can say that the MT and the Z are, indeed, aggressively priced.

For the price, you get standard ABS, two colorway choices, and a one-year limited warranty. Range-wise, Yamaha advertises a fuel economy of 56 mpg on the MT which should result in a range of roughly 210 miles. Kawasaki doesn’t disclose official fuel economy numbers. However, according to fuelly.com, the Z400 averages 59 mpg (based on consumers’ reports). This results in a range of about 220 miles.

The Yamaha MT-03 and Kawasaki Ninja 400 are serious competitors in their segment. They are amazing starter bikes in that they’re easy to manage, easy to handle, but also easy to grow with. An issue we’ve noted in the past with small-displacement bikes was their lack of gut. New riders would buy a brand-new 250 or 300 because they were cheap and not so scary, run it for a year, then get bored and want to get a bigger bike, putting the one they own up for sale on the used market.

That’s not something you don't have to worry about with these two little guys. They are small and nimble and will give you the power you need without overwhelming you—their power delivery is gradual and linear enough to be easy to manage. Once you’re ready to level up, don't worry about having to get something bigger: both are ready to give you more. You don’t meet their limits easily—at least not within legal limits, which makes them wonderful little rides to keep in your garage for a long time. Even seasoned riders like the ones on the RideApart team can appreciate just how flexible and exciting they can be. Whether you pick Team Green or Team Blue, you can’t go wrong.