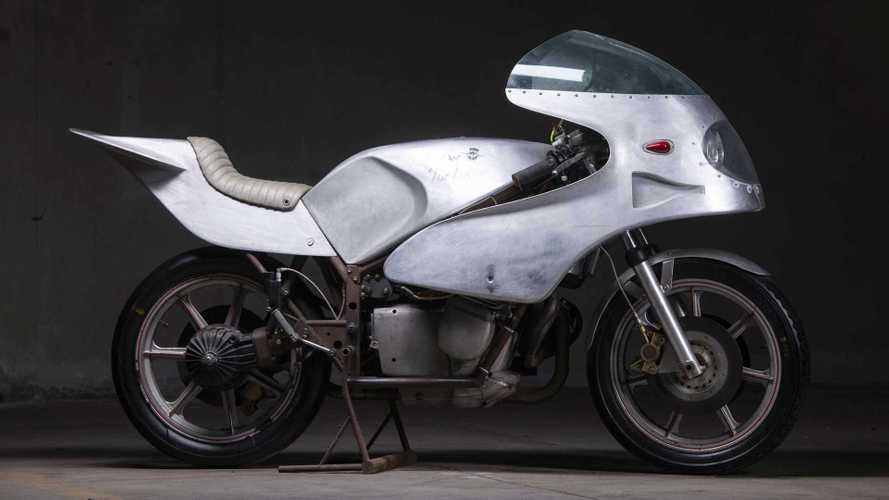 Fact: forced induction rules. There's nothing wrong with any vehicle that a turbo or a supercharger can't fix, an indisputable point proven by everything from the P-38 Lightning to Yamaha's Turbo Seca to Ford's EcoBoost engines to the last of the V8 Interceptors. There's something undeniably awesome about stuffing a cubic ton of air into a teacup (so to speak) and making it explode. Bikemakers have known this for decades, and the Big Four have all—with various levels of success—released turbocharged bikes. Did you guys know, though, that the Italians beat the Japanese to the turbo game way back in 1975? Neither did I until I saw this rad twin-turbo prototype from MV Agusta.

So, what are we looking at here? Apparently, it's a one-of-a-kind proof of concept prototype ginned up by some MV Agusta designers back in the mid-70s. Friends, the specs on this bike are completely bonkers. It has an MV Agusta 750 inline-four bored out to 830ccs with 12.5:1 compression. The mill features special lightweight pistons mated to titanium connecting rods replaced the stock items and a valvetrain that is, in a word, extravagant with sodium-filled exhaust and titanium intake valves. Then, to keep the heat down, the entire thing (including a beefed-up clutch) was slathered in an aerospace-grade, heat-dissipating plasma coating.

Once the engine was all squared away, the designers (clearly drunk on wine and their own hubris) slapped two turbos on it—one for low RPM work, one for high. Mechanical fuel injection (shudder) was fitted along with a digital(!) ignition system to get it running, and a custom exhaust manifold was fabbed up with an eye toward reducing turbo lag. Other features include the best brakes to be found in the parts bin, a clever monoshock rear suspension, stout front forks, and an amazing dashboard that looks like something out of a WWII fighter plane.

Since the bike would produce some seriously intense heat with the twin-turbo setup, the designers built the bodywork—which looks like hand-beaten aluminum to me—to get as much air as possible to the engine. There's also a weird fin/spoiler thingie on the tailpiece which is probably there for downforce, but it's also totally possible it's just there because it looks cool.

It's not entirely clear if this prototype ever ran, or if it did if it was ever tested on the track. Design records state a claimed 158 horsepower and a theoretical top sped of 186 miles per hour. Seriously? You'd never catch me on that thing. Almost 200 mph on a bike with a hand-built frame and circa 1975 tire, brake, and suspension technology? Nooooooooo thanks. The thing probably handles like a puppy on freshly-waxed linoleum. A very, very hot puppy with turbo lag best measured in days. That said, it is achingly beautiful, as Italian bikes tend to be, and is a fascinating piece of motorcycle history.