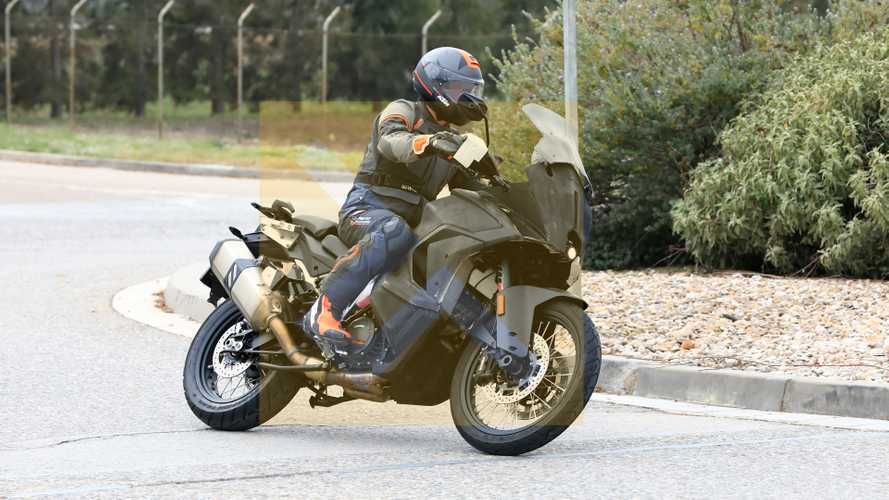 Though disguised, some new styling and features are visible.

New spy shots of the next-generation KTM 1290 Super Adventure reveal some of the next generation model's secrets. Though it's heavily disguised, the new bike seems to make some significant changes from the current model.

OUR NEXT EXCITING ADVENTURE

Immediately noticeable is the fresh bodywork that covers more of the bike than the current model. The engine is now partially covered, as well as more of the frame. Its lines more closely resemble the 790 Adventure.

The twin fuel tanks appear to sit lower on the new bike than the current one. Placing that weight lower on the bike should improve handling. This particular bike has an awkward panel covering the left rear corner of the bike. This is probably there to hide components lying below it, so don't expect it on the production model. The large exhaust covers this area on the right side, so no cover is needed there.

The front fairing is wider and has a redesigned windshield, which appears to be manually adjustable like the current model. Two large cuts in the top of the fairing indicate that this windshield will have a wide range of motion. The small single headlight on this particular bike is unusual for a KTM. It's probably just a generic headlight to obscure the bike's final appearance. The large crease in the middle of the fairing indicates that something similar to the current headlight arrangement should be there.

We can also see what appears to be a larger TFT screen in front of the rider, tucked behind the windshield. The seat and general ergonomics of the bike appear to have been tweaked a bit as well, which should result in a more comfortable riding experience.

We know that the new Euro 5 safety and emission standards go into effect in 2020, so the 1290 Super Adventure will have to comply with those. KTM has already been testing the new 1290 Super Duke, which shares its engine. The new models look to have a much larger radiator than the current 1290. This would help keep the engine cool for a leaner fuel mixture since it needs to reduce emissions by 30 percent from the current model for Euro 5. KTM certainly won't want to lose horsepower while reducing emissions, so some other electronic trickery will no doubt help the old engine meet the new standards.

Check out the photo gallery below to see even more pictures of the new KTM 1290 Super Adventure.