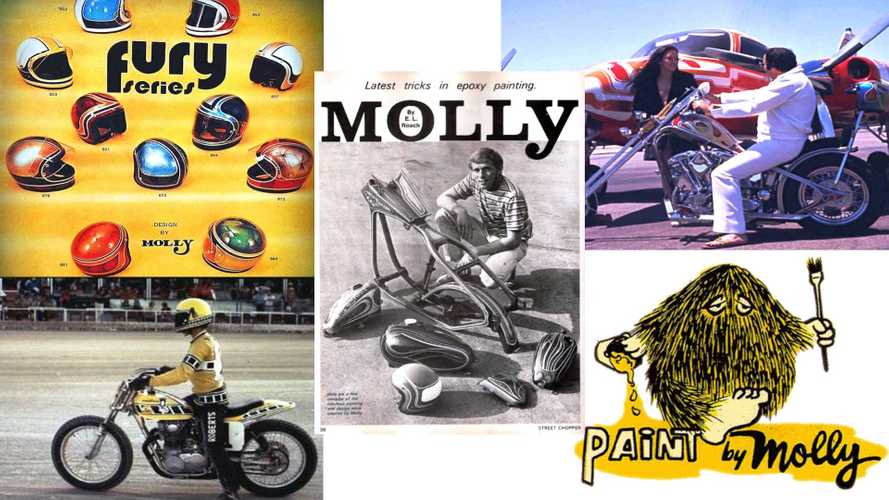 The behind the scenes art and color genius who branded modern motoring.

One man was responsible for creating Kawasaki green, the Yamaha black and yellow strobe stripe paint motif, the Buick Grand National emblem, the look of Toyota motorsports, and the "L" logo on the nose of every Lexus. That man was Rollin "Molly" Sanders, who got his start painting choppers in Southern California while barely out of high school. Even now, 8 years after his death, you can still see his genius on display at your local motorcycle dealer; he didn't consult on the new Kawasaki Z900 RS Cafe, but he certainly would approve.

Molly died in 2010, from lung cancer at just 66, and still riding a black and yellow, strobe striped, Yamaha FJR1300. Yes, he had customized it himself. His memorial  was reportedly well attended, with his bike, a Buick Grand National, a Dan Gurney Eagle Indy car, and a Toyota Camry pace car he painted, according to USA Today. At the time he was still mostly a behind the scenes guy, but known to the folks at Kawasaki, Yamaha, Dan Gurney's AAR, and the GM and Toyota styling departments he was still consulting for.

But in 2016 Kawasaki put out a press release giving credit where it was due, and celebrating the moment in 1969 when "team green" was born. Legend has it that those first factory bikes for the Daytona 200 painted by "Paint by Molly" were actually done in a 1969 AMC Gremlin/AMX/Jeep color. It was chosen as a poke in the eye to the establishment (it was the 1960s) because superstitious racers thought green bikes/cars were bad juju. A few years later, Molly came also up with what may be the second most famous Kawasaki color scheme; Candy Root Beer Brown with orange stripes.

Not long after Kawasaki green debuted, in 1971 as far as we can tell, Molly created the strobe stripe paint that would become associated with Yamaha and Kenny Roberts. Digging back through images on the internet, there does not seem to be an exact date and bike that the black and yellow debuted. Kenny does not appear to be using it before some point in 1971, and Yamaha was still using the red and white paint scheme internationally. But, when Kenny Roberts rode his black and yellow TZ750 flat tracker on the mile in 1975 it became a worldwide phenomenon. Yamaha even consulted with Molly and gave him credit for the design of some of the sweaters they sold in the 1970s (as seen in my Christmas sweater post). Yamaha went back to Molly in the 21st-century, and together they came up with exactly the right shade that became "Yamaha Blue."

On the four wheeled side of things, Toyota started working with Molly at about the same time as Yamaha, possibly because of the Yamahauler. That custom truck features red, orange, and white paint, and a stripe pattern similar to what would appear soon after on Toyota Motorsports cars and trucks. Over the years his paint graced Toyota cars in every type of motorsports, and all of the Long Beach GP celebrity race cars. When they started developing the Lexus brand, they went back to him and he sketched one of the simplest, and most elegant logos of modern times.

Molly also served as a dose of California cool during General Motor's most boring era, the downsizing, malaise years. He reportedly chopped the top a few inches on a 1980s GM coupe, and minimized the windows, to show them how much cooler they could look. Then, after seeing the NASCAR racers based on Buick Regals, he helped reverse engineered the look of the race body back into a street car, which became the Grand National.

Look in the galley below and you'll see other example of race cars, choppers, and other things he painted.