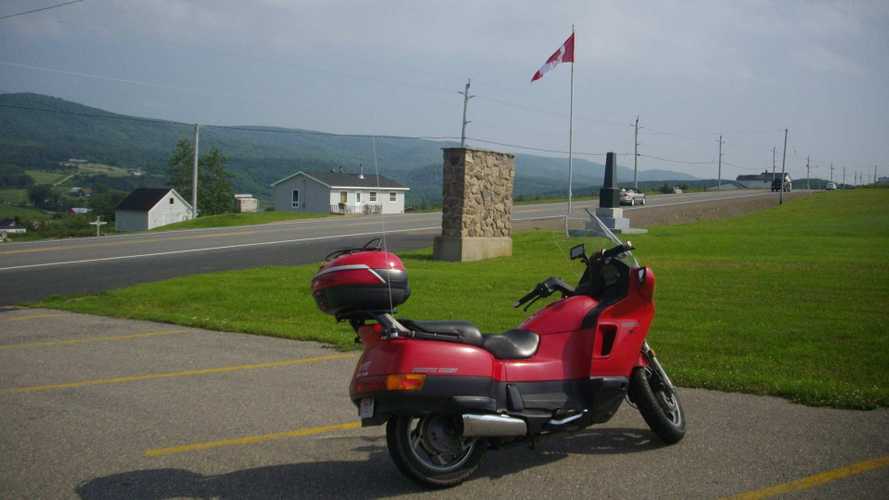 A motorcycle made for people who don't ride motorcycles

As the new guy around here, I should probably tell you a little something about myself. Hi. My name's Justin, and I ride a Honda Pacific Coast 800.

Besides being the subject of the greatest used bike ad ever posted, the PC800 is unique in that it was a motorcycle designed for people who don't ride motorcycles. There is absolutely nothing bad-boy about the PC800, and that's exactly the point.

In the late 1980s, Honda's motorcycle designers teamed up with Honda's car designers to create a bike that would appeal to people used to commuting on four wheels rather than two. It uses a modified version of the engine from the Shadow, but rather than being exposed and riding to the gates of Valhalla, shiny and chrome, the PC800 hides its engine, as well as everything else, under vast expanses of plastic. That's because you won't need to access the engine very often. The PC800 was also designed to be super low maintenance. It's shaft drive, so there's no chain or belt to adjust. It has an automatic timing chain tensioner and even hydraulic valve adjusters, unheard of at the time.

The crowning achievement of the PC800 is its trunk. Rather than have saddlebags like other touring motorcycles, it has two large storage compartments on either side of the back wheel, and the entire top rear quarter of the bike (including the passenger seat) opens forward to reveal them, like a car trunk. This is the perfect place to stash your helmet and jacket when you walk into the office, or, on the weekend, load up with ice and cold beer. There are even drain plugs to empty the water afterward.

The riding experience is extremely smooth. The gas tank is below the seat, not in front of the rider where a false panel covers the air filter instead. The exhaust is quiet and sounds more like George Jetson's car than the cruiser that donated its V-twin engine. Performance is adequate, certainly not on the level of true modern sport touring bikes, but enough to do the job and hold its own while being smooth and comfortable all the way.

Sure, its styling may be a little on the unusual side. It has a big butt thanks to its cavernous cargo area, and though many bikes are covered in plastic today, when the PC800 first came out in 1989 it looked like something straight out of the future. According to the Internet Movie Cars Database, it was even used as a future bike in and Harley Davidson and the Marlboro Man and several other films.

Sport touring bikes are popular today, but Honda marketed the PC800 to non-riders, attempting to entice them into riding this kinder, gentler motorcycle. For some reason, people who don't ride motorcycles weren't interested in buying a motorcycle which led to sales so poor that the model was dropped in the U.S. for a few years. Ultimately it was an expensive slow seller for Honda, leading to its discontinuation in 1998.

I've owned my 1998 PC800 since 2012. Despite being one of the last ones ever made, it's no museum piece. I ride this bike and have put over 20,000 miles on it since I got it. It's taken me all over New England and New York. It's taken me up Mount Washington, New Hampshire. It's taken me all the way out to the far end of Cape Breton, Nova Scotia, to ride the Cabot Trail. And aside from gas, oil, tires, and a single major tune-up, my PC800 has done all this without complaint or any major maintenance or repairs whatsoever.

Anyone who's ridden a PC800 understands the appeal of the PC800. It has handled anything I've thrown at it, from city traffic to long days in the saddle and even a track day. It's like the Energizer bunny of bikes. It keeps on going and going. Honda may not have built a bike that appeals to non-riders, but they succeeded in building the motorcycle equivalent of a daily driver. Regardless of what types of bikes you're most into, there's always a place for a PC800 in anyone's garage.