2011 Honda Shadow RS: proud to be a Japanese Bonneville rival 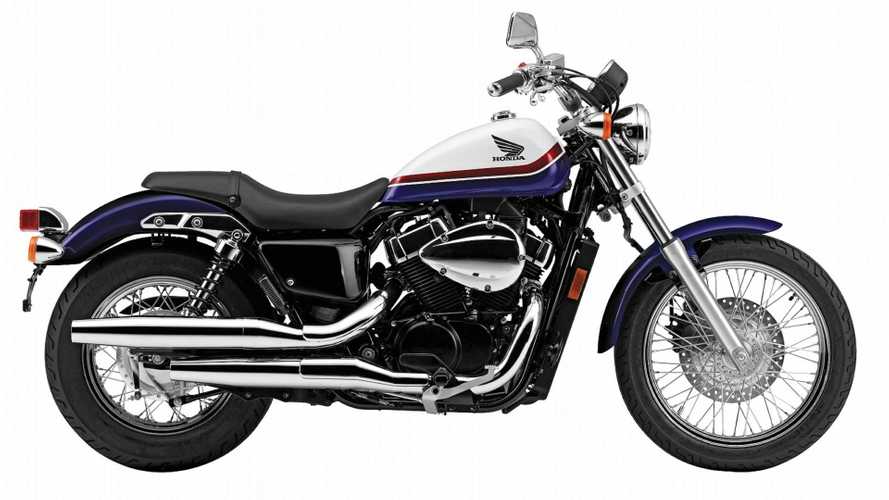 Flipping through Honda’s latest new 2011 models press release, we nearly nodded off from boredom; it was just some new cruiser colors, new seats on a side-by-side and some mild upgrades to children’s dirt bikes. Then we saw this 2011 Honda Shadow RS and got excited. Yes, we did just put “excited” and “Honda Shadow” in the same sentence and no, we weren’t even being sarcastic!

For those of you not keeping track of such things (probably 99.9 percent of you), the Shadow RS is Honda’s old stand-by cheap cruiser, just now with mid-mount foot controls that actually make it rideable and standard-style handlebars. Admittedly tiny changes, but they’re enough to transform the Shadow from a worthy-but-forgotten cruiser into a legitimate competitor to the Triumph Bonneville. A retro standard that has ur-motorcycle styling and decent quality components.

Of course, we would still have forgotten that the Shadow exists if it weren’t for this new paint. Available from December, the tri-color paint scheme could have come straight off an RC30 and its even complimented by the classic Honda wing. Not only are we huge fans of both Honda wings and HRC colors, but they represent a shift in visual impetus for the bike, transforming it from Harley-clone into something that’s actually proud to be a Honda.

If you’re like me, you’re probably utterly ignorant of the Shadow’s specs, so let’s recap them: 745cc liquid-cooled v-twin; 45bhp; 48lb/ft; 56mpg; 507lbs. That compare’s slightly unfavorably to the 865cc parallel-twin Bonneville’s 66bhp; 50lb/ft; and 495 lbs, but neither of these bikes are about numbers, they’re about a fundamental retro riding experience and the Bonneville’s about as exciting to ride as a sewing machine thanks to its character-free engine (the Scrambler’s 270° firing order fixes that). We haven’t ridden a Shadow, but hopefully its v-twin makes riding a little more interesting, we’ve heard good things from our buddy Rex Roy.

So let’s add up what we have here. A standard-style, nice looking, affordable v-twin with mid-mount controls, low-ish bars, solid styling and great colors that gets 56mpg? A reliable, basic cruiser that’s not afraid to be Japanese? That sounds like a pretty solid bike to us. In fact, as hyper-critical aesthetes, we only have one minor criticism: the old yellow Honda wing, as seen on this RC30, would have been even better.

Oh and don’t worry, Honda assures me that there’s more 2011 models coming this fall and, knowing my outrageous anti-cruiser, exciting-bike bias, even says, “You'll LIKE them!!!!”