What to Do if You Crash Your Motorcycle 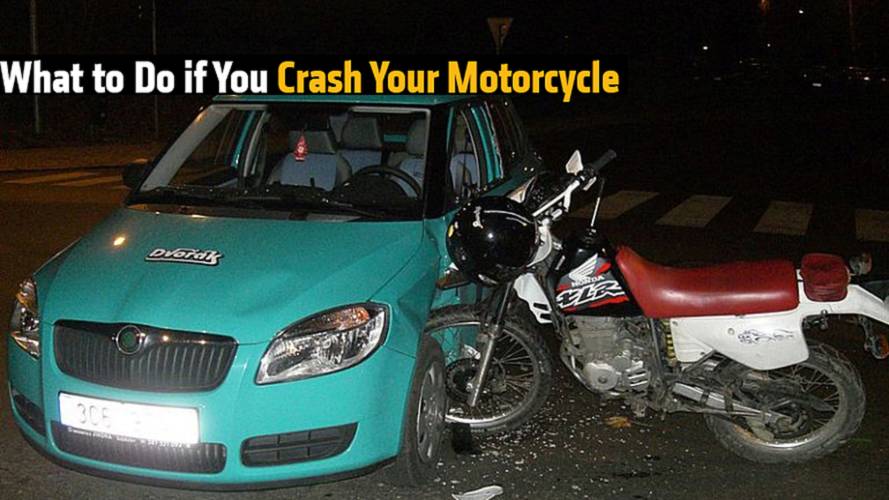 So you crashed your bike? What now? We discuss what to do if you crash your motorcycle.

Nothing is better than hitting the open road on your motorcycle for a nice long road trip. But the open road isn't always so, well, open. No matter how much you plan your journey to feature as many scenic back roads as possible, you don't always prepare for the worst. What if you're on that trip and you lay it down—what then? We explain what to do if you crash your motorcycle.

Hopefully you already have a good idea of how to avoid a wreck, but the problem is that not everybody on the road shares that valuable knowledge. So a wreck can happen no matter how skilled a driver you are, though you probably know that. What you might not know is how exactly you should go about recovering from a crash when you're on a long road trip, far away from home.

Take this totally hypothetical situation that definitely didn't happen to me: say you decide to drive all the way to Yellowstone National Park where you plan to meet some friends on a certain date. And, let's just say for the purposes of this hypothetical, that you happen to be running a little late because you got into a fight with your girlfriend the day you planned to leave, so you're looking for any way to cut down on time.

So that means you set out right after a rainstorm even though you know that's one of the worst times to ride, because the roads are extra slick. And lo and behold, a car cuts you off and you wipe out in a back road in the middle of Wyoming. And let's just say you completely trashed your bike and are now stuck in the middle of nowhere with a useless motorcycle. What do you do?

Well, first thing's first—if you're in an accident, you want to assess if everyone involved is okay. Chances are if you're on a motorcycle and the other people are in a car, you're worse off. If you happen to be by yourself this assessment will be brief.

Take More Pictures Than You Think Are Necessary

Next, take as many pictures as possible of the accident from as many angles as you can. If you're in the middle of a busy street and the involved vehicles can be moved to the shoulder, you should do so quickly, but the few seconds it will take to snap some pictures will be worth it later on. Besides, if this happened far away from home you can’t just come back another day to get a better look. Most photos on smartphones contain metadata with the GPS coordinates of where the photo was taken. This can come in handy later on so that you'll be able to locate the exact spot where the accident happened, even though you're unfamiliar with the area.

Get Their Info and Make Sure It’s Real

Exchange insurance information with the other people in the accident. Usually police don't have to be called if both vehicles can drive away from the scene, but if you're unsure of the law in the state you're in, call anyway. This will ensure the accident is properly documented and also that the other person can't try and pull a fast one on you by giving you false information. If you want to be sure they gave you the correct phone number, read it back to them but purposely get a digit wrong. If they correct you, great. If not, they might be trying to trick you. (This trick works for girls at the bar too, not that they would ever give you a fake number.) Remember you’re far from home so this is the ONLY chance you have to get the correct info.

READ MORE:  10 Common Motorcycle Accidents and How To Avoid Them - RideApart

Next, you'll want to contact your insurance company as soon as possible. Most of them have a certain number of days to report an accident, so you're better off doing it sooner rather than later, especially if you're on a long trip. They'll also have the resources to get you in touch with a nearby rental place.

And last, if you don’t have one already, get a motorcycle lawyer. These guys completely saved me when I had the unfortunate situation of having people in the other car admit to me it was their fault at the scene but try to blame me for damage to their vehicle a few days later.  Motorcycle lawyers will be on your side and have tons of experience with things like this. I highly recommend looking into getting one.

READ MORE:  What I Learned From My First (and Hopefully last) Motorcycle Crash - RideApart

One bonus tip: Before you go, tell someone where you’re going to be, and tell them to keep their phone on. Make sure you’re ready for what can happen on a crash before you even hit the road and you’ll have a much better experience.

Hopefully you’ll never need most of the advice in this article, but if you do, you’ll be glad you were prepared.

Scott Huntington is a writer, blogger, and rider. Check out his blog, offthethrottle.com.