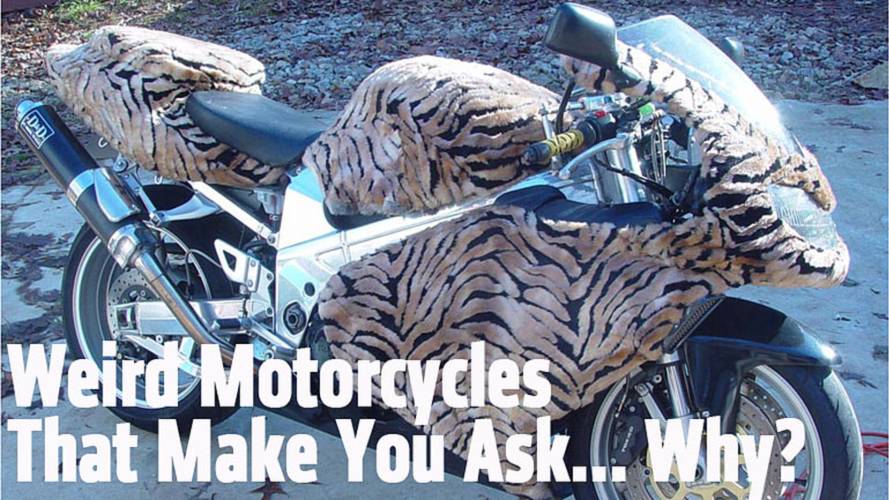 The great thing about motorcycles is that you can personalize them to your own taste and style. Some people achieve this with astonishing results. But, there are others that push the boundaries of sanity. Here’s some of the weird motorcycles making the rounds on the internet that make you ask... Why?

Top of our list, and in first place, is this guy with the massive ape hanger bars on his Harley-Davidson. His picture, riding his bike, has been around for some time and there’s even video footage of him cruising in to motorcycle meets. But nobody it seems entirely sure who he is, or why he rides with bars like this. He seems happy enough with his choice, but it must get tiring on long rides with your arms stretched towards the heavens and how he steers that bike is beyond us.

Cruisers are known for having lots of chrome, right? Chrome fastenings, chrome exhausts, chrome air cleaners. But at what point does it become too much chrome? Apart from the saddle, every single item on this bike appears to have been dipped in a chrome bath. Can you imagine the hours that go into trying to keep the bike clean and shiny? Coming down the road towards you, in bright sunshine, it must magnify sunrays and burn the retinas off your eyeballs.

Take two motorcycles and weld them together. It’s been done before, particularly in the early 1970s, and the results have produced some interesting looking trikes. But someone really thought about this set up. Take two chopper springer front forks and attach them to a trike rear end. After that, truly believe that you will be completely fine in a straight line and in total control. The first curve you come to though might be a bit of an issue.

Need to get your promotional message across? Then build an advertising motorcycle. There have been loads over the years, adorned with product slogans and painted in company corporate colors. But, if birth control is a problem in your country, what better way to get people’s attention than build a condom bike? It does bring with it certain issues such as when people ask you what you ride, but at least you’ll get noticed.

Fritz Egli is a well-known Swiss motorcycle racer. When he stopped racing in 1965, he created his own motorcycle engineering store. Over the years he has gained a sizeable reputation for making frames for big Japanese motorcycles and had developed a loyal following for his custom engineering work with bikes and engines. But this image of an Egli Slipstream speed record motorcycle made us question a couple of things. How does the rider actually get on and off the bike and how is the bike staying upright in this picture?

If you’re not happy with the way your motorcycle looks there are some great alternatives. Find yourself a bison, kill it and then put its skin and head on your bike. It will guarantee crowds and make you stand out, but you might find the smell of burning hair and rotting hide a little overpowering.

Finally, Thai artist Roongrojna Sangwongprisarn is well known in his home country for amazing metal sculptures. But he recently turned his attention and his creative talents to motorcycles and came up with the “Alien” bike. It’s more than a piece of art, though, as it apparently runs as well. You just wouldn’t want to hit anything or anyone with it.

What's the weirdest motorcycle you've seen on the road?