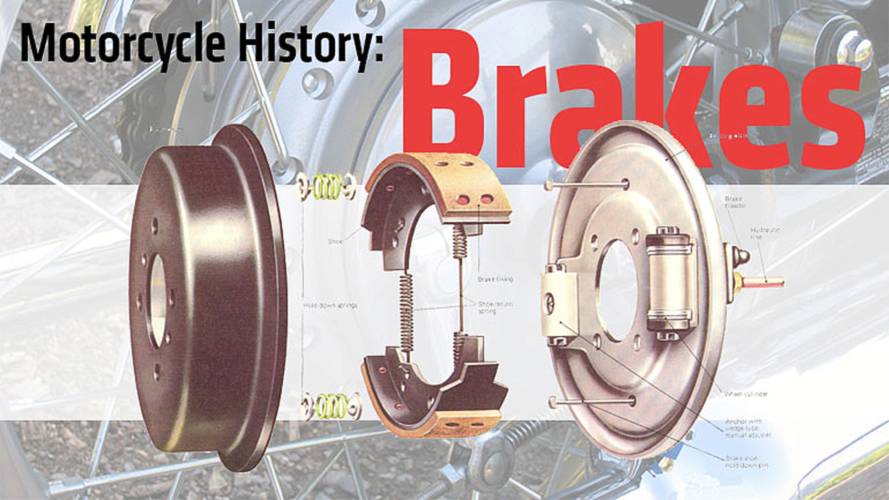 There are several pinnacles in the history of motorcycle braking systems, most notably the adoption of disc brakes in the '60s then ABS in the late '80s.

Each week RideApart looks back at key milestones in motorcycle history from technical innovations to significant model introductions to racing successes and, of course, some of the disastrous things we’d rather forget. This week we take a look at motorcycle brakes that have evolved from very rudimentary systems to the sophisticated engineering and technology we have come to expect on today’s bikes.

There are several pinnacles in the history of motorcycle braking systems, most notably the adoption of disc brakes in the 1960s followed by anti-lock systems in the late 1980s.

However, in the early days of motorcycle pioneering bikes didn’t have any form of brakes. Once you got the motorcycle going, you relied on slowing your bike down and sticking out your legs to get it to come to a halt.

It wasn't until 1902 that Steffey Motorcycles of Philadelphia, came up with one the first systems that allowed riders to slow or stop a motorcycle. Steffey used, on the front wheel only, a steel plate that rubbed on the tire to slow the bike down. It worked, as effectively as the Steffey motorcycle that was a Hartford bicycle frame with a small capacity engine mounted in it. The braking system was similar to what you would find on a bicycle.

In those early years, as motorcycle manufacturers started to develop specific frames and more powerful engines for bikes, they also recognized they needed to make them stop more efficiently. The solution was a single leading shoe brake on the front wheel. It was a simple, effective design that was cheap to produce and is still in use today.

By the 1960s, the manufacturers had developed very powerful internal expanding forms of shoe brakes. But as braking efficiency improved with greater power it also generated heat. This caused brake fade and it was British manufacturer AJS that first came up with a solution for this by developing a conical hub with cooling fins.

Disc brakes had been developed on race cars in the mid-1950s but it wasn’t until 1962 that the first system was used on two wheels. The Lambretta TV175 Series 3 Scooter lays claim to be the first to be equipped with disc brakes.

But, the first production motorcycle to use discs front and rear was Honda with its CB750 Four in 1975.

Honda engineer Yoshiro Harada was visiting the U.S. when he came across some aftermarket disc brake in a parts shop. As a result, he immediately visited Lockhart, the developer and manufacturer. After consulting with the supplier's staff regarding the ideal design, Harada left the company with a set of their products.

Honda first tried the system on CB450 with encouraging results and then began to develop a disc brake system for the forthcoming CB750 Four that was to be launched at the 1966 Tokyo Motor Show.

Harada was still unsure whether disc brakes were a good option and he approached Honda’s company founder Soichiro Honda and asked for some advice.

"We've designed two separate specifications having different braking systems," he told Mr. Honda. "One uses conventional drum brakes and the other had disc brakes. Of the two, the disc-brake specification had only recently been developed, so it will need more tests. If disc brakes are adopted, we aren't sure we can meet next spring's completion target."

Mr. Honda's reply, though, was simple and direct: "Well, of course we'll have to go with disc brake and drum rear."

The CB750 FOUR was a hit at the Tokyo Motor Show, and drew a lot of attention with its big front disc brake and drum rear.

However, immediately following the show, many hours were spent analyzing the remaining problems. Before the model's commercial launch issues that needed to be solved included increased wear of pads and noise in the brake pads, problems that were generally associated with disc mechanisms. They had to be solved in order to "achieve higher power while maintaining safety," which was a key requirement in the development of the CB750 Four.

This first motorcycle disc brake system developed by Honda used a solid steel rotor with a single piston. In the dry it worked fine but under heavy braking in the wet there was still a lot of room for improvement.

MV Agusta followed Honda soon after in 1967 with disc brakes but it proved so unpopular with owners that many converted their bikes back to drum brakes.

By the 1970's, most manufacturers were beginning to experiment with rotors and calipers. Although some were still trying to develop the drum brake system further.  In 1974, Benelli created a single leading shoe on both sides of the front wheel. As the rear brakes on a motorcycle are not used to as much as the front, a single leading shoe system was adequate for most of the bikes at that time.

As engine performance increased on motorcycles, manufacturers tried many different ideas to cool the brakes down, this even included drilled holes as an attempt to reduce heat in the rotor.

First developed on MX bikes, the wave rotor was another attempt to keep the rotors cool and reduce warping and it proved very effective.

BMW raised the bar in motorcycle braking in 1988 when it became the first ever manufacturer to design and develop anti-lock brakes on a bike as standard. The BMW K100 LT featured massive regulators in this first generation ABS. Today ABS is set to be a standard fit on every new motorcycle.

Perhaps the strangest front braking system ever designed on a motorcycle was the contra rotating rotor system used by Aermacchi on one of its 500cc road racers. The unusual design was intended to offset centrifugal force with the wheel and rotor spin in opposite directions.

And that was a brief history of the development of motorcycle brakes. Ready for a quiz?