Why You Shouldn't Be Scared Of A Big Bike 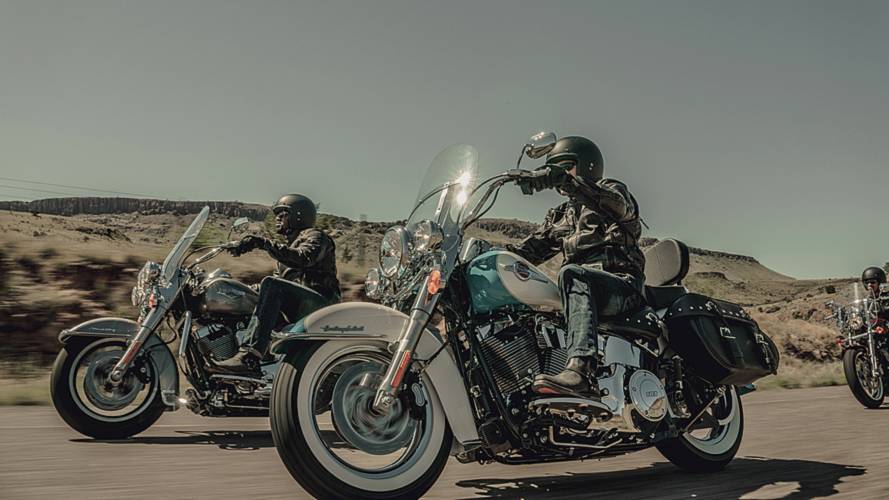 It wasn’t Harley’s biggest bike, but it was pretty intimidating for me, a fairly new rider. What I found out, however, that I was dead wrong about big bikes.

My first big bike exposure was at my first motorcycle press trip several years ago. I had recently obtained my motorcycle license after taking the Motorcycle Safety Foundation (MSF) course with my wife. It was also my third or fourth time riding, and the trip was with Harley-Davidson at their headquarters in Milwaukee, Wisconsin. I was the only member of the media present and I had two seasoned riders as my guides through the streets of Milwaukee.

Of course, I knew Harley-Davidson didn’t really make any smaller bikes, but part of me tried to ignore that fact. Instead, I got excited about this motorcycling press trip as an opportunity to learn more about the storied brand.

Then I saw the bike they were going to put me on: a Fat Bob with a 103ci engine and weighing in at 706 lbs. Now, I’m not a small guy. I stand 6’2” and weigh almost 200 pounds, but this seemed like a lot more bike than I was prepared to handle. After all, it was a heck of a lot bigger and more powerful than the 492cc, 360 lb. Buell Blast I’d rented in South Carolina and even more massive than the diminutive 196cc, 278 lb. Yamaha TW200 I used at the MSF course.

Sure, it wasn’t Harley’s biggest bike, but it was pretty intimidating for me, a fairly new rider. I found out, however, that I was dead wrong about big bikes.

I was worried it would tip over as soon as I tried to take a turn and was concerned that it might be too powerful for me—I’d lose control and get myself into a ditch, or worse, a car. I felt like a press poseur whose riding skills, or lack thereof, were about to be revealed in embarrassing and bodily injurious ways, but it was too late to back out.

Once on the bike, however, it felt shockingly good and I began to ease my firmly held views. The saddle was comfortable and I didn’t feel like I was dwarfing the bike like I did on the Yamaha or the Buell. In fact, the cruiser style suited my body frame really well, allowing me to sit more upright than I would on the smaller bikes. It also was the right height—I could put my feet down without looking like I was doing squats.

Once on the throttle, the torque was smooth and progressive rather than totally overwhelming or jerky and uncontrollable. At highway speeds, I felt significantly safer due to the Fat Bob’s stability and size—and it didn’t even have a fairing. Pavement and expansion gaps, even some pretty bad ones on the Hoan Bridge, would have been dangerous on a smaller bike, but because of the Fat Bob’s big tires, big engine and weight, I felt much safer.

READ MORE: What Was Your Favorite Motorcycling Moment Of 2014? | RideApart

It also seemed to manage cross winds better on that chilly day. The bike’s abilities (less than the rider’s) made it possible to absorb bigger bumps and handle higher speeds without getting skittish. It provided a much higher dose of rider confidence where it was needed, and since the ride height was just about perfect, stopping and managing lower speed maneuvers with the right technique wasn’t a problem. I knew that since the bike was heavier I’d be much more careful at lower speeds and much more aware of the bike’s dimensions. I took nothing for granted while riding it, making me a safer rider overall.

When I was riding the Buell Blast, I felt nervous on smooth pavement and at speeds of over 50 mph. For my frame, it was a horrible bike that instilled zero confidence while riding.

When I returned the Buell to the rental dealership, the clerk noted my mileage. “You’re crazy,” he said. The odometer showed that I had ridden over 300 miles. He said, “No one’s ever done that kind of mileage on this death trap. You should be riding something much bigger. It’s a smaller bike that’s not designed for rural areas like this with higher speeds.”

I should’ve known better, but I automatically assumed that beginner riders should avoid the bigger bikes (in both size and displacement) because they appear to be too much to manage.

But the truth is that if you ride a bigger bike and your frame truly can manage the dimensions and weight, employing proper, safe and skillful riding technique can make all the difference between utter intimidation and true riding pleasure. If you think about it, what’s safer: driving a dinky Chevy Aveo at 80 mph or a BMW 7-Series? The latter, of course. And though driving and riding are separate skill sets, the idea is the same. If you ride safely and wisely, the bigger bike will allow you room, whereas if you push the limits of the smaller bike, you’re potentially putting yourself in harm’s way.

It doesn’t automatically mean you should be buying or riding a bigger bike, but don’t rule it out just because you’re intimidated by it. Talk to owners of bigger displacement, larger bikes and find out their experiences. Take classes that will allow you to ride larger motorcycles so you can learn proper low speed techniques that require the ability to maneuver well. Finally, start thinking about riding a bike that’s more appropriate for you instead of assuming that the smaller bikes are for less seasoned riders. You’ll be thankful you did.