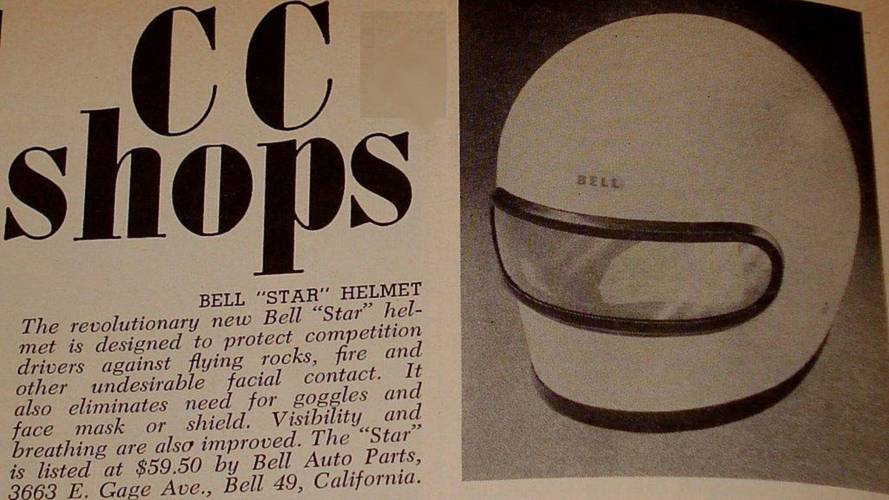 The story of the first full face motorcycle crash helmets. Every full-face crash helmet can trace its heritage back to the iconic Bell Star.

Each week RideApart looks back to highlight key milestones in motorcycling history from innovations to significant model introductions to racing successes and, of course, some of the disastrous things we’d rather forget. This week it’s the 50th anniversary of full-face motorcycle crash helmets.

One of the major milestones in motorcycle safety is probably sitting on your head every time you get on your bike. This year marks the 50th anniversary of the production and sale in 1963 of the first ever full-face motorcycle helmet, designed and developed here in the U.S. by Bell Helmets.

Back then motorcyclists (as well as drag, car and boat racers) were faced with limited choice in safety headgear. All that was on offer were either three quarter open faced or half helmets with varying degrees of protection and safety. Some car and bike racers were even using helmets made out of leather or cork.

According to Bell, it was actually motorcyclists that pushed for a better helmet design and as a result, its engineers went back to the drawing board and came up with the first full-face motorcycle helmet that the company christened the Bell Star.

It had a rigid outer shell constructed from stain weave fiberglass cloth as was used in the aircraft industry. The direction of the weave was crucial to ensure maximum strength across the helmet’s surface and it was bonded with a high impact polyester resin that was then coated with a scuff-resistant epoxy coating. Inside there was a conventional EPS liner, not that dissimilar to type you find on today’s helmets. In the 1960s Bell made a point of marketing the fact that the liners used in all of its crash helmets were made from the same material used by the U.S. military in its HGU 2/P flight helmet and by NASA in astronaut helmets.

The Santa Cruz- based company began selling the Bell Star in February 1963 and described the helmet in its catalog as being revolutionary, with maximum face protection, better visibility and breathing for the wearer than a conventional helmet and that it would not fog up. You didn’t get a flip up visor like we know today, but a shatterproof plastic lens that had to be popped out of its rubber moldings.

At $59.50 it was pretty pricey too and the most expensive Bell helmet in the company’s five-strong line-up. But like all Bell helmets at the time (and today), the Star met the crash criteria set up by independent safety organization the Snell Foundation. The requirement, 50 years ago, for a helmet to receive the Snell safety approval was that it passed a simulated crash test without serious damage to the helmet or potentially the wearer’s head. The impact test involved withstanding a 120 ft.-lb. hit, or the equivalent of a 16 lb weight traveling at 16 mph and hitting the helmet.

The Bell Star quickly found a big following among motorcycle enthusiasts, including top bike racers, as well many of the world’s leading race car drivers. All of today’s high tech crash helmets are light years away from the original 1963 Bell Star in terms of design, construction and the materials used to make them. But every single one of today’s full-face crash helmets can trace its heritage back to the iconic Bell Star.