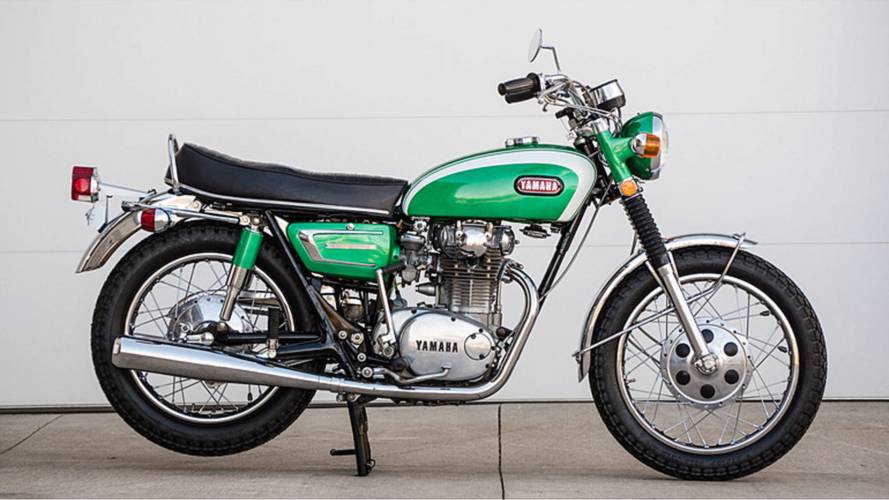 Way, way back in 1955, the Yamaha Motor Company started life producing zippy little two strokes for the Japanese home market. The company's first bike, the legendary YA-1, was basically DKW's RT125 with the numbers filed off and a bunch of in-house upgrades added to make it uniquely Yamaha's. The engine was an updated version of the RT125's 125cc two-stroke single, mated to a new four-speed transmission with a kick starter. With the paint barely dry on the first YA-1, Yamaha entered a bike in the 3rd annual Mt. Fuji Ascent Race and the very first Asama Highlands Race and won the 125cc class in both.

A FUTURE FOR TEAM BLUE?

Those two wins, and the reputation of the YA-1—which devotees called the Red Dragonfly—as a reliable and competent race winner, set the tone for the next decade and more of Yamaha's growth. For almost 15 years Yamaha focused on two things: building highly-regarded two-stroke motorcycles and winning races. By the mid-60s though, Yamaha could see the coming end for street-going two-strokes and decided to get in on the four-stroke game.

The YA-1, Yamaha's first motorcycle

Taking cues from a number of bike makers, including, Triumph, BSA, and, legend has it, a semi-defunct German marquee called Horex (The Horex name lives on under French ownership), Yamaha released its very first four-stroke motorcycle in 1968. Called the XS-1, this all-new bike was powered by a 360-degree unit construction parallel twin displacing 650 cubic centimeters. It had a chain driven single overhead cam (pretty racy technology for the 60s), two valves per cylinder, a pair of constant velocity Mikuni carbs, points ignition, and a kick starter. In stock trim, the Yamaha twin put down around 50 horsepower at 7,200 rpm and roughly 40 foot-pounds of torque—not too shabby. A five-speed transmission got all that power to the rear wheel via a chain final drive, and stopping was handled by drums front and rear. Probably the most revolutionary thing about the new Yamaha twin was that the crankcases split horizontally rather than vertically like those of its English cousins. This not only improved access to the bottom end and transmission but virtually eliminated the kinds of oil leaks that the older British twins were notorious for.

Reactions to the XS-1 were mixed, leaning toward positive. Motorcyclists liked its power, respectable handling, fit and finish, and its stylish looks but the hard-mounted parallel twin was buzzy, and at high speeds it vibrated like crazy. The bike also had a nasty front end wobble at high speeds – a problem that was solved with a beefed up triple tree in later models – which made a lot of riders uneasy to say the least. Racing teams took to the bike quickly, however, and it performed especially well as a dirt track racer throughout the 70s. The XS-1 was replaced by the XS-1B in 1971, a bike that featured a single front disc brake instead of a drum and a handful of other small upgrades, and then the XS-2 in 1972 which brought an electric starter to the family. The XS-series was replaced by the TX-series in 1973, but Yamaha brought back the XS prefix in 1975. Despite what Yamaha called the bikes in official literature, they were known simply as XS650s to their riders and admirers.

Production of the XS-series 650s ended in 1983 in the United States and 1985 in Europe and Japan. Throughout its remarkable run, the XS-1/XS650 series spawned a number of different versions and special editions, and even laid the foundation for Yamaha's legendary XS family which included its little brother the XS400, the XS750 and XS850 triples (I'm an XS850 man myself), and the monstrous XS1100 inline four. Today, XS650s are popular in the various custom scenes, and a lot of these old bikes have been turned into great retro-style choppers or speedy cafe racers. Their reliability, power, ease of customization, and a strong aftermarket gained them a passionate and well-deserved following over the years, a following that shows no sign of going away.