A Long Weekend With An Airstream Sport 22 - Review 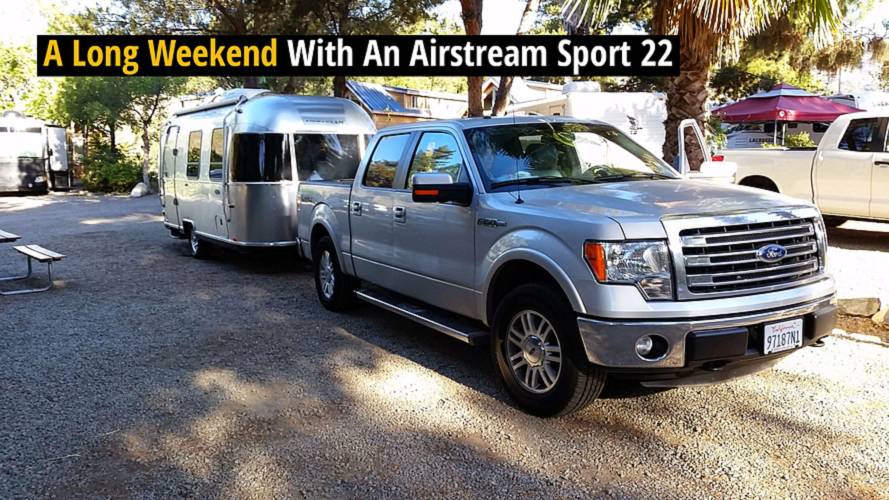 A Long Weekend With An Airstream Sport 22 - ReviewThere are very few designs in transportation more recognizable or iconic than that of an Airstream...

There are very few designs in transportation more recognizable or iconic than that of an Airstream travel trailer and very few have had as long of a history as the classic teardrop shape, originally penned by Hawley Bowlus, then adopted by Wally Byam for his newly founded Airstream Trailer Company in the early thirties.

You just need to park an aluminum Airstream from the ‘60s next to a factory fresh one and, at first glance, play spot the differences. Trust me when I write that this will be a harder game than imagined. Byam’s mantra “Let’s not make changes, let’s only make improvements” has held true for the longest running company in the travel trailer business. Many of the company’s firsts and innovations continue on in its latest models including gas powered fridges from Dometic (introduced in the 60s), steam-valve Thetford toilets, and the Byam Burner heating system. Airstreams were designed for self-containment, giving you the ability to camp without a need for hookups and Byam’s innovations have pushed the Airstream to the top of the business, and moved the entire industry along as other manufacturers picked up their innovations.

Like Porsche, that other transportation company that also leans on long lasting iconic design and holds fast to unique engineering philosophies, Airstream is a premium brand. To bring the price of entry down some, Airstream recently introduced a new “Sport” line in two sizes - a sixteen footer that sleeps two starts around $41,000 and a twenty two footer with room for four at $49,000. By comparison the Flying Cloud 23, which is the next most comparable model up the Airstream ladder, starts out at $66,000.

The lot of Airstream’s Los Angeles dealership, which is actually in San Gabriel just north east of downtown, feels like a time warp to the 1960s. Only the modern Mercedes Sprinter Van-based Touring Coaches bring us back to the 21st century from the wonderful sight of the myriad of gleaming aluminum Airstream trailers.

After a thirty minute instruction on the systems and features and a quick calibration of the trailer brake, we rolled out with a shiny new Airstream Sport 22FB hooked to a two-inch hitch with stabilizer bars behind my 2013 Ford F150.

I immediately noticed the first benefit of Airstream’s aluminum construction as the 5.0 V8-powered truck made easy work of pulling away – quite unexpected given the camper was slightly longer than the truck. A quick hop home to load up our weekend supplies and we were off to the KOA Ventura Ranch campground nestled in the foothills between Santa Paula and Ojai.

As first-time campers, KOA’s Ventura campground was a great spot for our crew of city slickers to be introduced to the great outdoors. With hookups for power, water and waste, and pristine shower and bathrooms a short walk away, we didn’t really get a chance to test Wally Byam’s quest for self-containment, especially since the few camping essentials we arrived without were available for sale in KOA’s store a few feet from our pitch. Surviving the first night in the Airstream was going to be a breeze.

We took a hike to “Big Foot’s Watering Hole”, which, since it was summertime and California was enjoying a hellish drought, was unsurprisingly a patch of dried up mud. A huge swimming pool was under construction and will make up for any lack of natural water features soon. We enjoyed an outdoor movie under a Super Moon, and of course toasted s’mores on a camp fire built from wood recently purchased in the camp store.

Compared to the monster fifth-wheel trailers surrounding us; with satellite dishes, shag carpet (for real!), oak cabinetry, tacky earth tone exteriors and expanding interiors, the little Airstream looked cool, clean and actually really modern looking. The Airstream’s facilities are deliberately more spare and focused (though we did have a flat screen TV) and the build quality, and quality of appliances, fixtures and fittings are premium and classy even in this “entry level” Sport model. I’d take our cool camper over those tacky and giant monster RVs any day of the week.

We hung outside by our campfire under a blazing full moon while it seemed most of our neighbors locked themselves into their rolling living rooms. Since our crew exceeded the Sport’s four person capacity we split sleeping quarters. The less adventurous shared the queen and double beds in the trailer and the rest slept outside in a tent.

KOA Ventura has a unique morning alarm feature in the shape of roving peacocks. While they were vaguely cute and interesting to have around when we arrived, we were quickly cursing their pre-dawn squawks. We sparked another campfire to take the dawn chill away and fired up the stove to boil water for coffee. After a camp friendly breakfast of bagels and cream cheese, we decided to head for the beach.

A run to the coast and down Pacific Coast Highway again showed the benefits of Airstream’s lightweight construction. I’m not going to say that I didn’t know the twenty two foot trailer was hanging behind my F150 but I certainly didn’t feel like the curvy coastal road was something to be afraid of tackling. An added bonus, we weren’t holding up traffic. Apparently, because of Airstream’s unique lightweight construction, a modern half ton capacity pickup is all you need for even their longest thirty foot International Serenity model.

Since we were unable to secure an overnight camp near the water – summertime camping in California is a full contact sport - we decided to day camp at Zuma beach in Malibu. The parking attendant charged me a not unreasonable triple rate to bring the truck and camper in. We pitched up in an empty lot right next to the sand where the Airstream brought many questions and compliments from passers-by, something we were warned of.

An Airstream for a day at the beach is just an awesome experience. Having an outdoor living room steps from the surf under the trailer’s awning was especially convenient. We used the kitchen to prep sand free meals. We enjoyed the luxury of a private toilet and hot enclosed showers at the end of a long day in the sun. We succeeded in testing Wally’s quest for self-containment, if only for the day. After watching a beautiful Malibu sunset shine off that iconic aluminum skin of “our” new Airstream, I was more than disappointed that I had to give it back...