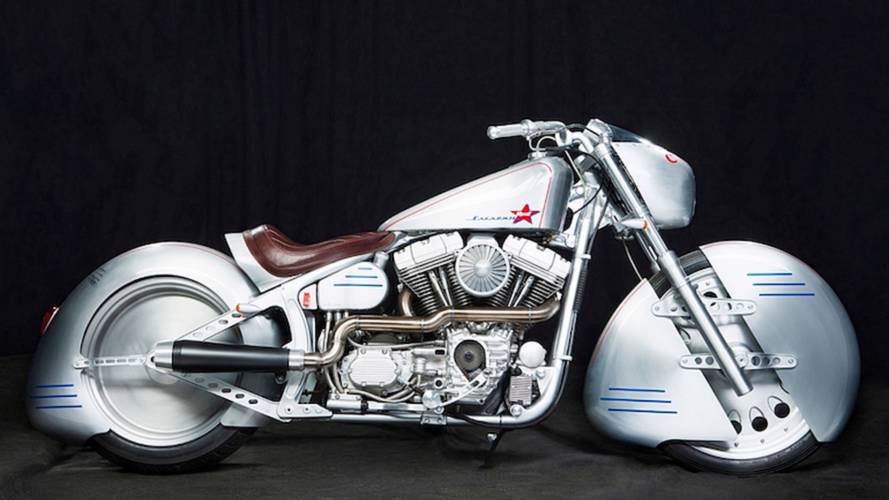 A one-off Belarusian Harley tribute to one of the great pioneers of space travel.

Starting with the launch of Sputnik I in 1957, the competition between the US and the Soviet Union to conquer space drove rapid technological advancement. The space race also gave rise to the celebrity of a handful of individuals who literally journeyed where no man had ventured before. One of those brave pioneers was Yuri Gagarin, who on April, 12, 1961 became the first human to enter outer space. Gagarin orbited the planet in under two-hours before parachuting to safety from an altitude of 4.5 miles. This beautiful custom Twin Cam Harley is a tribute to Gagarin, his achievements, the Vostok 1, and the dawn of the space age era itself.

After returning to Earth, Gagarin became an instant international celebrity and hero of the Soviet Union. He traveled the world attending parades held in his honor and accepted countless prestigious medals. For legions of kids growing up in the (then) Soviet Union, Gagarin was an idol – a legend of mythical status. One of those youngsters was Yuri Shif, now the owner and operator of Yuri Shif Customs in Minsk, Belarus.

Gagarin attending one of many parades in which he was honored.

YSC is a two-person operation consisting of Shif and his trusty mechanic, Dmitry “Dimos” Lobanok. Together, the pair has generated several dozen top-notch customs. The shop’s work is routinely entered in elite events like the AMD World Championship Of Bike Building, and the shop has seen its bikes crowned “Best in Show” on numerous occasions. YSC’s machines are also regularly featured on big-name sites like Cyril Huze Blog and BikeExif.

Shif and Dimos kicked off the project with a 2003 Softail frame that was modified to accept YSC-designed a bespoke swing-arm and front end. The two then machined a one-off set of neo-futuristic rims – 21 inches forward and 18 aft – before wrapping both in Avon rubber.

At the heart of this Gagarin-inspired scoot is a Harley-Davidson Twin Cam 88 (1,145cc) equipped with fourth-gen Twin Tec TCFI, a stock transmission, and clutch with Baker parts. The American power-plant spits burnt fumes out of dual custom fabricated pipes courtesy of Shif and Peter Barrucci. The primary drive is a handmade unit made in-house at YSC as well. The handmade turbine-style intake is an absolutely gorgeous touch that helps tie the build together without over-doing it.

The fenders on YSC’s Gagarin tribute play a vital role in the build’s overall appearance. These custom-fabricated pieces add to the bike’s vintage, space-inspired theme, and pair-up wonderfully with the custom wheels. The front fender’s cutout for the brake hardware is a subtle but precise and expertly crafted touch too. Shif also hand-built the machine’s tank, seat-pan, front cowl, and oil-tank. All the chrome plating was done in-house, as well as fabrication of things like the handlebars, foot pegs, and levers.

Lighting consists of a headlamp made by YSC and an aftermarket taillight. The bullet-shaped signals are very vintage space-age, and complement the bike's theme very nicely. Shif personally hand-stitched the build’s custom saddle, demonstrating the impressive range of skills the renowned builder possesses.

The custom’s Vostok 1-theme can be seen in the bike’s exposed metal with drab minimalistic touches of red and blue lines. The headlight cowl sports the classic “CCCP” while the tank fittingly reads: “Yuri Gagarin”. The wide rear-fender is adorned with a replica of Gagarin’s hand-written script from a famous quote of his that read: “Orbiting Earth in the spaceship, I saw how beautiful our planet is. People, let us preserve and increase this beauty, not destroy it!”.

One of the only major complaints I have is that I wish YSC had used a Ural or Dnepr instead of a Harley. It seems like a strange choice for a donor considering who was competing in the space race at the time. Aside from that, I thoroughly dig this one. Shif and Dimos display an acute attention to detail that helps to define their work as professional-grade. Though YSC could have gone with the over-the-top-route and somehow recreated more of the Vostok 1’s look, I think the less is more approach works well here.

YSC has built a handful of impressive one-off Harley’s, as well as his fair share of metrics, and has even completed a pretty nifty car project. Honorable mentions of YSC’s definitely goes to “The Machine”, “The Duster”, “The Ducky”, and “The Terminator”. If you know of a bike that you think deserves to be RideApart’s next Bike of the Week, drop us a line at info@rideapart.com

Special Thanks to Mikhail Butenko for translating the quote on the rear-fender.