The History of Suzuki’s Air/Oil-Cooled Machines 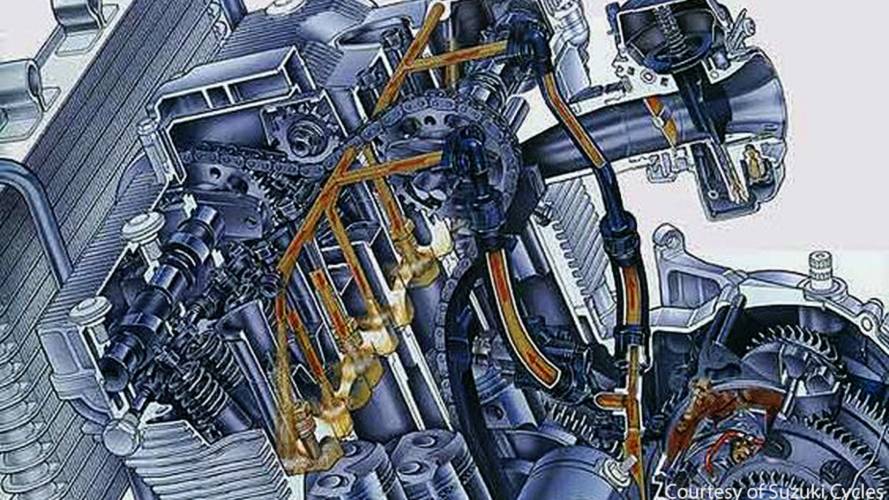 A quick look at the history of Suzuki's oil/air-cooled motorcycles.

Suzuki was the third of the big four Japanese bike makes to the four-cylinder four-stroke party – after the Honda CB750 and the Kawasaki Z1 – when they came out with the GS750 in 1977.

At the time, Suzuki had been known as the manufacturer of some of the most technically advanced 2-strokes, such as the GT750 “Water Buffalo” but the 4-stroke was soon to become its staple engine design. Before delivering the new engine it had studied the good and bad aspects of the Honda and Kawasaki, as well as the superior handling of the Brits, and released what at the time was the best all-around bike of the bunch: The GS750. It was followed by a 1000, then a whole plethora of sizes and styles over the next decade – all based on the same, heavy, roller-bearing 1970s bottom end – until they had once again been outclassed.

Then in 1985, Suzuki released a whole new bike that changed motorcycles forever: The air/oil cooled GSX-R 750.

America didn’t get the new GSX-R until 1986, but the rest of world had it in 1985 (Japan actually got a 400cc version in 1984) and it immediately outclassed everything. The former top Suzuki 750cc sportbike, the GS750ES, was only down 16 horsepower from the new bike, but it weighed in at 68 pounds more. Suzuki reduced the weight by starting with an all new box section aluminum frame, then sweating-off every ounce as they designed the bike from a clean sheet of paper. The real star of the show was the all new air/oil cooled SACS motor, which would eventually be made in sizes from 400cc to 1400cc, and be used until 2006 in various models.

Suzuki engineer, Estuo Yokouchi, was tasked with keeping the air-cooled motor in the XN85 turbo, cool. He researched oil jets and auxiliary oil cooling, as used on WWII aircraft before finding his solution. The SACS (Suzuki Advanced Cooling System) motor would have oil squirters to cool the underside of the pistons, as well as a secondary oil circulatory system to cool the cylinder head, ports and combustion chambers. The oil pump had both a normal high-pressure rotor, for the main and cam bearings, and a low-pressure/high-volume rotor that circulated oil through the cooling passages. The cylinder block remained air cooled, and had distinctive small fins on it, which made these engines look good in naked bikes. The good-looking, reliable motor, combined with plenty of wrecked sport bikes, gave rise to it becoming the engine to use in street fighters in the 1990s and 2000s.

We riders in America just don’t appreciate small-bore bikes, probably because of our "bigger is better, too much is never enough" mentality, but in Japan the SACS motor debuted in 1984 with a jewel-like GSX-R400. The all new motor was fitted into an alloy frame that was similar in design to the steel frame used on their previous sport bikes, but also very close to the 2-stroke Gamma race bikes. The 400cc class is one of the most popular in Japan, and to no one's surprise the new GSX-R was an instant hit, making about 60hp and weighing 30-70 lbs less than the similarly sized bikes from the competition.

First year GSX-R 750 motorcycles are very similar to the 1986 we received in the US, but they featured a 25mm shorter wheelbase, and had a reputation for being unstable because of it; folks called them “slingshots' due to their twitchy handling. When tariff issues were worked out for 1986, Suzuki made it up to us with a limited-edition homologation model with upgraded brakes and fork, a solo seat, and a dry clutch for racing. These early motorcycles set new standards for streetbike handling despite their skinny 18-inch diameter wheels, and also featured one of the first progressive shock linkages on a production bike as well. Atthe time, many people called sportbikes “Ninjas” no matter the brand, but the GSX-R750 was a real sportbike while the Ninja was still just a water-cooled GPz with body work.

The year 1986 was huge for Suzuki in the United States. We got our first taste of both the GSX-R750 and the open class GSX-R1100 as well. This big bike was everything the 750 was, only more of it. Externally the motors are nearly identical, though the 1100 is taller. The body work was similar and the frame was the same design, only made of thicker aluminum rails, resulting in a heavier bike. The 1100 version may have weighed 434 lbs, but it put out nearly 140 hp to make up for it. That extra 40 lbs, and nearly identical motor dimensions, led to the popular home-brewed GSX-R7/11, where the big bore motor was slipped into the 750 frame with the obvious results that came from a lighter, more powerful 1100.

Meanwhile, middleweight Suzuki fans had been stuck with the old-school GSX550 for years while the bigger bore bikes got all the latest trick features, but that started to change in 1988. The new-for-'88 GSX600F Katana featured a smaller version of the GSX-R750 motor, with milder cams and lower compression for better mid-range, slotted into a steel perimeter frame. These 600cc machines were cheaper, and were perfect for less skilled riders. The Katanas weighed 50 lbs more than the GSX-R750, and only put out 80 hp, but that was still good for the class at the time. It wouldn’t be until 1992 that a real GSX-R arrived and put its stamp on the 600 class.

Suzuki also maximized its profits at the same time by building a 750cc version of the Katana called the GSX750F. The big Katana was only made available in the United States, using almost the exact same parts that made the 600. The frame and bodywork are said to be identical, with only minor variations in the fork, shock and brakes. Of course the motor was the larger 750 version, detuned slightly from the GSX-R version.

For some reason the 1100cc version of the Katana used smaller 16-inch wheels, but otherwise it was very similar to the smaller bikes. In Europe these torquey beasts were fitted with luggage and considered sport tourers.

The GSX1100G is perhaps the redheaded stepchild of the big bore GSX-R variants, and it is all because of a weight problem. Compared to the 1200cc Bandit, which is very similar in size and style, these shaft drive bikes weighed-in at 70 lbs more. Still, they had about 100hp, which peaks way down at 7500 rpm. That made these really great bikes for freeway cruising and cheap sport-touring. Perhaps the best thing about them is that compared to a used Bandit they are often half the price!

Even though the air/oil cooled Katana was still being sold, Suzuki saw room in the market for a more traditionally styled, naked bike below it in the line-up. These Bandits still looked good, and show off that sexy (SACSy?) air/oil cooled motor better than anything except for a GSX-R based streetfighter. The next year an S version was offered with the same upper bikini fairing the 1200cc Bandit used. In Japan they got a variation with a full 750cc motor, but you'd have to roll your own if you want one here. We did get a bump up to 650cc in 2005, but then came the end for the classic SACS powered bikes.

Seriously, these Bandits were some of the best all around bikes for older riders, or anyone with back problems. They have a nice upright riding position with plenty of power everywhere so you don't have to work hard to go fast. Sure, they are heavy compared to modern sport bikes at 460 lbs, but that is nothing compared to a Harley or even a classic CB750, KZ900, or XS1100. You got a modern suspension and electrical system, and there was even the option of ABS brakes. Pretty much all the GSX-R go-fast motor parts fit, too.

I lump these two together because they are very similar, and we didn't get either of them. More traditionally styled than the Bandits, with twin shocks and a more retro shaped tank, the Inazuma and GSX1400 are popular in Japan and Europe with custom bike builders. Why build up a GS750 or 1000 when you can buy a 150mph bike that looks just like it, but already equipped with modern brakes and suspension? The twin rear shocks don't hold it back as much as you would think. An honest 100+hp all day long, and a claimed dry weight of just more than 500 lbs makes for a fun commuter or weekend ride.

Believe it or not, that is not a 1970s endurance race bike, but a custom Inazuma from Rocket Garage