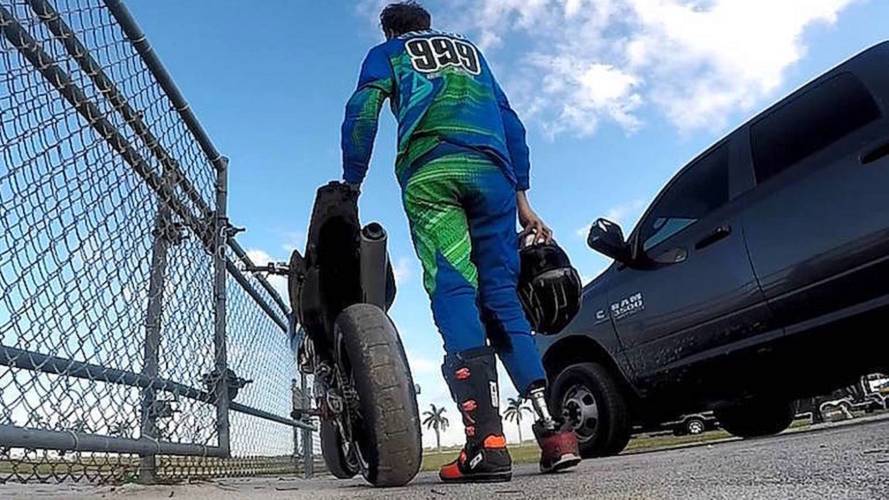 Ever since the crash that cost him his lower right leg, Remington Bloch has been busier'n a one-legged man in an ass-kicking contest. Two years ago, while riding to lunch with some friends, he was t-boned by a car. This resulting in the loss of most of his right leg from the knee down, but not his spirit or his drive. Fast forward to today and, after starting his own company and learning to ride with a prosthetic leg, the now 25-year-old amputee is preparing for the 2018 season of the AMA national circuit in the US and Canada.

Motorcycle Gear for the Disabled: The “LegUp” System

Bloch has been riding for more than a decade and has an appreciation for a wide variety of bikes and riding styles. The man loves dirtbikes and supermotos, enjoys a good track day, and owns several Harley-Davidsons (some of which are setup for stunt riding). So, after a long recovery, Bloch has set his sights on the SM1 class in the 2018 season where he will become the first-ever amputee to compete in the series.

Bloch’s dismemberment—which is the word he uses “because that’s exactly what happened”—occurred on June 20, 2016.

“It was a sunny South Florida day. Hot, humid, you could see the heat waves pouring off the coarse asphalt," Bloch said. "It was my day off from pilot school and I was enjoying it by working on a new bike I hadn't picked up long ago from a friend. A Suzuki DR650 dirtbike with street tires and rims, usually called a ’Supermoto'.".

Bloch got a call from a friend inviting him to grab some lunch and with his daily rider buried behind a sea of old bikes, parts, and tools inside his storage unit, he opted to take his new SuMo. A few minutes later he arrived at his buddy’s house where he met up with several more friends. They proceeded to pile into a car, then followed Bloch on his 650. While passing through an intersection on Florida’s Dixie Highway, an intersection Bloch had just crossed on his way to his pal’s house, he was broadsided by a car. The impact threw him several feet into the air and across three lanes of traffic.

Avoiding Ten Common Accidents: How to keep your limbs

“By the time my body hit the ground I recognized the feeling of impact from falling so many times before, but this time was different, a car had hit me," says Bloch. "My pelvis felt as though it was shattered, it was ringing numbly, then I felt the pain in my ankle, I was sure it was bruised quite badly, possibly even broken. By this point my friends had surrounded me and are just saying ‘Oh my god’  over and over. The burning sensation in my ankle is unbearable at this point. I reach down to grip my ankle and am puzzled, my foot is no longer there. In its place a stump of shredded flesh and bleach white bone sticking out. The remnants of what was once my foot are now hanging by my own Achilles tendon, swinging with each minute movement."

Bloch spent only a week in the hospital before going home where he slowly learned to get back on his feet—one of which was now a prosthetic. Not long after the dismemberment, Bloch was back on a bike. With a newfound enthusiasm, he focused on pushing his limits and bringing attention to the amputee and disabled athletic community. Bloch has since started his own company, “Traumatically Altered”, which sells shirts and seeks to raise awareness and funding for the disabled athletes.

For 2018 Bloch has decided to take things up a notch and will be competing in the SM1 Class (SuperMoto, open displacement, single or twin, must be expert/pro) on the AMA national circuit in the US and Canada. Bloch already got a chance to compete in the AMA regional Southeast Supermoto’s seventh round earlier this month. Unfortunately, that experience ended with a DNF due to mechanical failure. Bloch did make a Youtube video of his experience at the Miami race though.

Handicap Hack: Modding a Ural Sidecar to Accept a Wheelchair

“I hope to bring a lot of attention not only to the series, but to active amputees around the globe and everyone involved. I am looking for people to work with this year to help make my vision a reality and make this a groundbreaking year for the disabled community in a nationally renowned AMA race series.”

Racing isn’t cheap, especially when competing on a professional level. For this reason Bloch is looking for some monetary support for his 2018 season and has set up a GoFundMe page where he’s seeking $40K to help pay for fuel, food, insurance, repairs, etc. Bloch will be racing with the number “999”. The season kicks off in April and runs through October of 2018. “Everyday, people get up not expecting to be the day that changes their life forever, or their last day on earth even. Such a normal light day can switch to a bad one and it does often,” said Bloch.