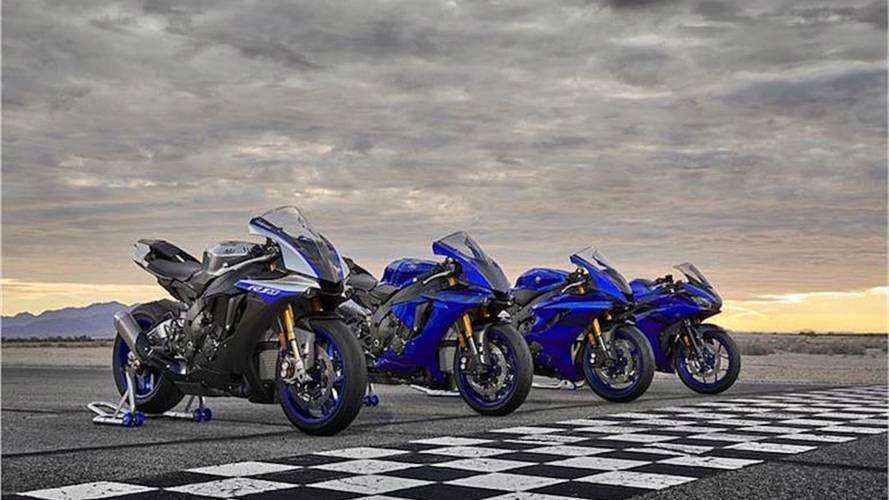 Light, nimble, and manageable R3? Or street legal race machine, R6? OR do you go all out and take the R1? Which bike would you choose.

Sport bikes are by far my favorite class of motorcycle, embodying everything I love about riding; the agility, acceleration, and speed are unrivaled by any other genre of two-wheeler . These machines are the pinnacle of performance, derived from decades of racing development. While today there is a myriad of spectacular sport bikes offerings, few do it better than Yamaha. So let’s take a look at the brand’s current supersport offerings.

Starting with Yamaha’s entry-level sportbike we have the R3. Powered by a liquid-cooled, 321cc DOHC inline twin-cylinder engine married to a six-speed transmission, the R3 makes 42 horsepower (at 10,750rpm) and 21.8 foot-pounds of torque (at 9,000rpm), and boasts a reported top-speed of 111 miles-per-hour. With a seat height of just 30.7 inches and a reported wet weight of 368 pounds (375lbs for the ABS model), the R3 is a great choice for new riders, and at 56 miles-per-gallon, it makes for a pretty decent commuter too. The R3’s stock suspension is made up of a 41mm telescopic KYB unit up front, and a KYB mono-shock in back. Pricing on the 2018 models start at $4,999 for Raven (black) or Vivid White, while the ABS models carry an MSRP of $5,299 in Team Yamaha Blue or Raven.

Back in 2006 Yamaha released an updated version of the R6, and boy did the manufacturer nail it. Some minor tweaks and changes were made over the next decade, but it wouldn’t be until 2017 that Japanese-made supersport would receive a full cosmetic update—styled heavily after the larger R1 which itself was derived from Yamaha’s YZR M1 MotoGP machine—as well as a complete electronics package, a feature typically reserved for flagship liter bikes and expensive European machines (albeit electronics are becoming increasingly common on new machines). I would argue the R6 is a tad aggressive for day-to-day use, however it is without a doubt the most competent track weapon in the 600cc supersport class. Make no mistake, this is NOT a beginner bike by any stretch, this is a highly potent race machine that happens to be street legal.

At the heart of the 2018 R6 is a liquid-cooled, 599cc, DOHC (sixteen titanium valve), horizontal inline-four that makes a claimed 116.7 horsepower (at 14,500rpm), 45.5 foot-pounds of torque (at 10,500rpm). The high-revving engine can supposedly get the 419 pound (wet) supersport up to a cool 160 miles-per-hour. The inline four is wrapped in an aluminum Deltabox twin-spar chassis and paired with a six-speed transmission. The R6’s suspenders consist of three-way adjustable, inverted 43mm KYB fork in front, and a four-way adjustable KYB mono-shock in back. The bike’s seat height is 33.5 inches. The 2018 Yamaha YZF R6 has an MSRP of $12,199 in Matte Gray, Team Yamaha Blue, and Intensity White/Matte Silver.

The R1 is Yamaha’s flagship superbike, and for good reason. The 441 pound (wet) liter bike makes a hair-raising 200 horsepower (at 13,500rpm) and 82.9 foot-pounds of torque (at 11,500rpm) thanks to a highly evolved liquid-cooled, 998cc, DOHC, inline-four with titanium intake valves married to a six-speed transmission. Like the R6, the 200 horsepower beast is built around an aluminum Deltabox frame paired with a fully-adjustable inverted 43mm KYB fork and a four-way adjustable mono-shock. The seat height is just a tad taller than the R6 at 33.7 inches. The R1 comes standard with an advanced electronics suite; traction control, slide control, ABS/unified braking system, launch control, wheel lift control, and quick-shifter—the latter two were revised for 2018.

Yamaha’s 2018 YZF R1 has an MSRP of $16,699 in Raven (again, black), and Team Yamaha Blue. However unlike its smaller siblings, the R1 is currently offered in three different specs. In addition to the standard R1, Yamaha also makes an S-varriant which is pretty much the same as the regular model, only it forgoes some of the components made from lightweight precious metals in favor of slightly cheaper parts, adding another seven pounds to the bike’s (wet) weight, though I doubt most riders could tell the difference, especially on the street. As a result the R1S is slightly more affordable at $14,999, only offered in Cerulean Silver/Raven for 2018. Yamaha also makes a ridiculously trick track-oriented version known as the R1M. The M-spec boasts all kinds of top-shelf upgrades, like full electronic Ohlins racing suspension, and a generous amount of carbon fiber, albeit for a price. The 2018 YZF R1M has a steep MSRP of $22,999 and is only available in a carbon fiber/liquid metal paint scheme.

All models come with a standard one-year warranty.