Safety is seldom sexy. No life jacket flatters your figure. Nothing lacks sex appeal like a Hi-Viz vest. Come to think of it, safety zealots could argue the same when it comes to motorcycle helmets. After all, protection—not attention—remains a helmet’s primary function.

Arai Helmet has operated under this notion for the past 70 years. Ever since founder Hirotake Arai fashioned his first shell mold in the early 1950s, the company championed a safety-first methodology. That uncompromising dedication shaped Arai’s brand identity over the years. From the firm’s R75 (continuous curve radius of 75mm) shell to its “glancing off” philosophy, Arai innovates in the name of protection.

That approach seems particularly old-school in today’s trend-seeking helmet market. Aerodynamics dictate race bike development these days and the same can be said for modern helmet design. More and more manufacturers are adopting angular elements and protracted rear spoilers, but such fads fly in the face of Arai’s construction conventions.

Enter the Contour-X. As Arai’s answer to contemporary contrivances, the sport-touring lid blurs the line between style and substance, between trendy and timeless. A breakaway spoiler refines the shell’s silhouette without sacrificing its protective properties. Arai's F1-style XGF top vents minimize snagging while maximizing ventilation.

The Japanese helmet maker went to great lengths to reconcile fashion with function, but the question still remains: can the Contour-X make safety sexy? After spending several months with Arai’s latest lid, we have our answer. 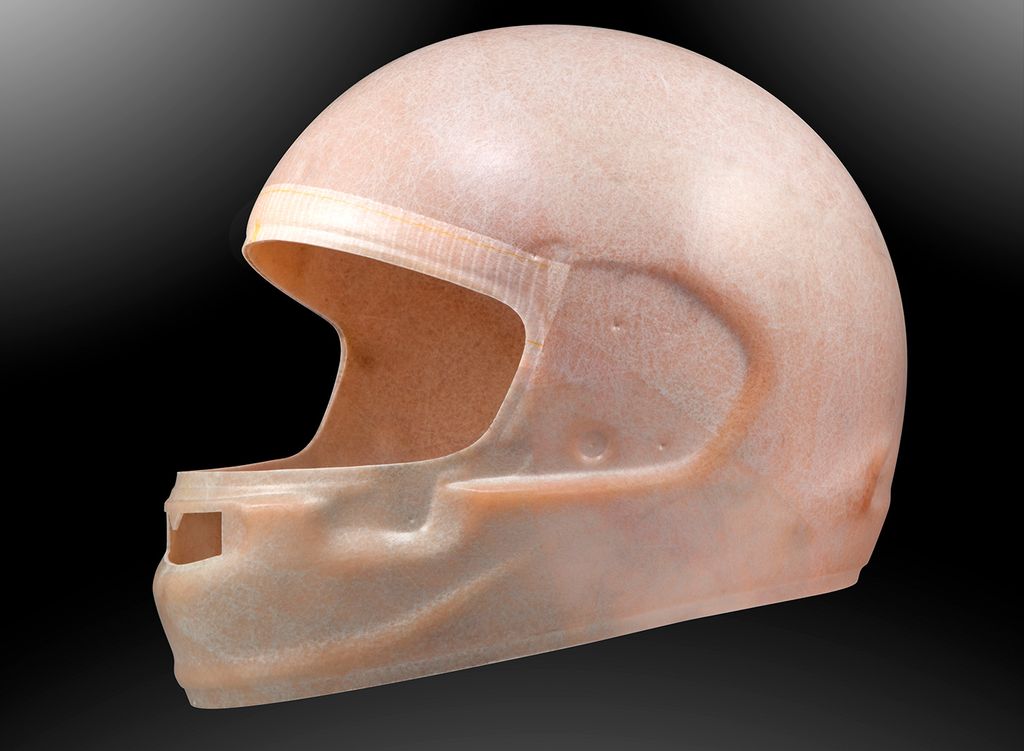 When it comes to the Contour-X's shell, Arai sticks with what it knows best: Peripherally Belted Complex Laminate Construction (PB-cLc2). By layering laterally-oriented belt fibers into the composite mold, the engineers reinforce critical impact zones without contributing weight to the overall structure. For the Contour-X, Arai replaces the traditional AR-mat while integrating an additional sheet of Super Fiber.

The result satisfies both the firm’s famous egg-shaped profile and protective standards. At the same time, the lightweight shell contributes to the Contour-X's 3.3-pound weight. Arai employs a similar recipe tweak when it comes to the helmet’s internals. With the Contour-X situated between the entry-level Regent-X and flagship Corsair-X racing helmet, the mid-tier model draws from both ends of the spectrum. 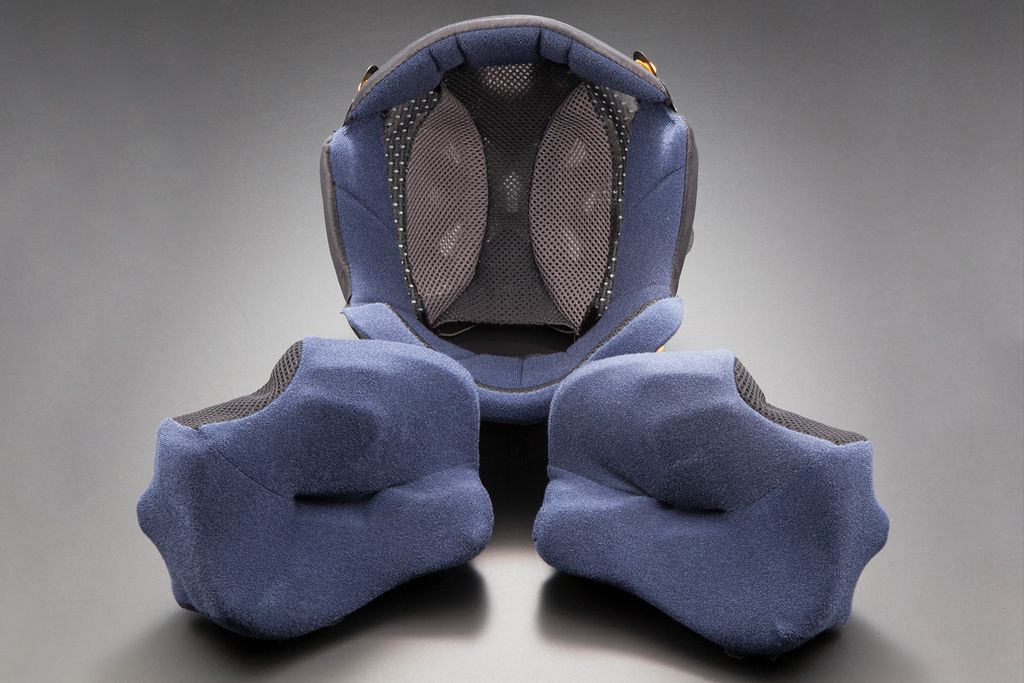 It favors plush padding similar to the Regent-X, but an odor-resistant brushed nylon fabric elevates the interior. Riders slide into those comfy confines with ease thanks to the 5mm flared opening at the bottom of the shell, another carryover from the Regent-X. On the head, the Contour-X lives up to its intermediate-oval architecture. The ultra-soft liner and padding cradle the head in cushy clouds, yet the fit never approaches flimsy or spongy.

While Arai upgraded existing features with minor adjustments, the brand’s most polarizing feature—the VAS (Variable Axis System) visor mechanism—remains. For full transparency, Arai reports that it lowered the shield mounting point to further smooth the shell across both temples. That may pay dividends in the event of a crash, but the rider has to operate the finicky visor lock on a daily basis.

One major complaint levied against Arai lies in its complex visor mechanism. Those unfamiliar with the brand will undoubtedly fumble with the safety-oriented lifting latch throughout the first few rides. Like anything, though, muscle memory builds over time. Once I learned to wedge my thumb under the visor’s lip with each pull of the spring-loaded fastener, my shield-raising woes quickly became a thing of the past.

The Contour-X may share the Regent-X's road-going DNA, but it turns to the Corsair-X for race-proven performance. To reduce buffeting while enhancing stability, Arai’s designers opted for a rear spoiler. The team turned to the Corsair-X's DF-X2 add-on accessory as a starting point but adapted the form to meet sport-touring needs. The brand claims that the breakaway component mitigates fatigue over time. In the saddle, however, the difference goes unnoticed.

Worn back-to-back with both the Corsair-X (sans DF-X2) and the Regent-X, the Contour-X's wind-splitting advantages weren’t all that apparent. Now, the benefits may prove fruitful over the long haul, but don’t expect the Contour-X's flowing lines to cut seconds off your commute time. What customers can anticipate, on the other hand, is extra airflow.

In concert with the Contour-X's cosmetic glow-up, Arai revamped the helmet’s ventilation system. A new air scoop chin vent not only updates the brand’s aesthetics but also yields more intake volume. Functionally, the sliding mechanism is easy to actuate while wearing gloves and users can also replace the vent’s filter. The designers applied the same care when crafting the 3D logo duct.

Arai repurposes its obligatory crown branding into a surprisingly effective wind port. With the integrated top tab pulled up, the inlet funnels any zephyr into the two pass-through holes in the liner’s forehead area. Arai measures the extra stream at 40 percent when traveling 50 km/h (31 mph) and seven percent at 120 km/h (75 mph). The Contour-X backs up those numbers on the road too, channeling ample air to the rider, especially when utilizing the full system.

That includes a chin intake, two crown vents, two visor brow inlets, and the logo duct. I know what you’re thinking, that’s a bevy of vents to manage—and you’re right. When opening all six ports in succession, I frequently resembled a third base coach sending steal signs. Still, with all inlets active, the Contour-X filters a staggering amount of air. So much so that I kept a Chapstick on hand for cold-weather riding.

Luckily, users can tailor the air current to preference and circumstance by simply closing one of the many inlets. However, even with nature’s air-con set to high, the helmet keeps wind noise to a minimum. Full disclosure: I almost never ride without earplugs. Helmet testing remains the only exception to that rule. I’m happy to report that the Contour-X didn’t assault my eardrums during that process.

That's because Arai designs the cheek pads to rest against the rider’s ears, muffling the turbulent air sneaking past the chin curtain. No matter the helmet, I will always stand by my ear plug recommendation, but riders should rest assured that the Contour-X muzzles most of the incoming wind noise, regardless.

In finding a middle ground between form and function, Arai also created a happy medium between its top-tier and beginner-friendly models. I’ve always enjoyed the Regent-X's accommodating interior but frequently wished for additional airflow. The Corsair-X never suffered those ventilation woes but it also did little in the way of comfort. The Contour-X splits the difference between the two, offering the optimal balance of performance and practicality for the road.

Positioned as a sport-touring lid, the Contour-X keeps one foot on the track and the other in the streets. The rear spoiler and XGF crown vents hail from Arai’s racing endeavors while the flattened sides and speaker pockets accommodate Bluetooth communicator units. It’s that blend of features that makes the Contour-X so versatile. Available in five solid colors and two graphics, the model caters to commuters and canyon carvers alike. Arai may have succeeded at sculpting an attractive helmet, but it never forfeited safety as a result.

Roadway to the Raceway: