Americans like everything big. From super-sized fries to super duty trucks, from Big Gulps to big V-twins, this land was made for all large things. Despite our penchant for portly proportions, Honda managed to carve out a sizable small bike market with the introduction of the Grom in 2014. Thanks to the model’s massive success in the States, Team Red later reintroduced the Super Cub and Monkey in 2019. Now, Honda’s eighth-liter renaissance resumes with the arrival of the 2021 Trail 125 and it could be the most versatile bike of the bunch.

Though the Trail is the latest in the brand’s expanding 125cc lineup, the little dust devil takes its cues from the original CT range. In 1960, Honda learned that Herb Uhl’s Boise dealership sold Honda 50s equipped with knobby tires and a larger rear sprocket directly to customers. Soon after, the company churned out the CA100T/Trail 50 in 1961 followed by the CT200/Trail 90 just three years later and the CT70/Trail 70 in 1969. The larger CT110/Trail 110 joined the fray in 1981, and the dirt-worthy thumper quickly became the vehicle of choice for campers, hunters, and fishers.

The latter-day Trail borrows much of its styling from those ‘80s-era CT110s. Whether it’s the strut-mounted front fender, tail rack, or iconic red livery, Honda stayed true to the Trail’s roots while refining the package for 2021. Disc brakes replace the drums of yore, s light the way, and as the name suggests, the capacity bumps up to 125cc. At a glance, the CT110 and Trail125 are virtually indistinguishable but Honda’s newfangled off-roader not only pays homage to its CT lineage but builds upon it.

Borrowed from the Grom, the Trail’s two-valve, SOHC, 125cc single shares its donor’s 9.3:1 compression ratio. Instead of fiddling with the internals to gain more midrange power, Honda tuned the exhaust and swapped in a 39-tooth rear sprocket to help overcome pesky obstacles. An aluminum skid plate protects the mini-mill from large rocks and flying gravel while crash bars provide some tip over insurance. 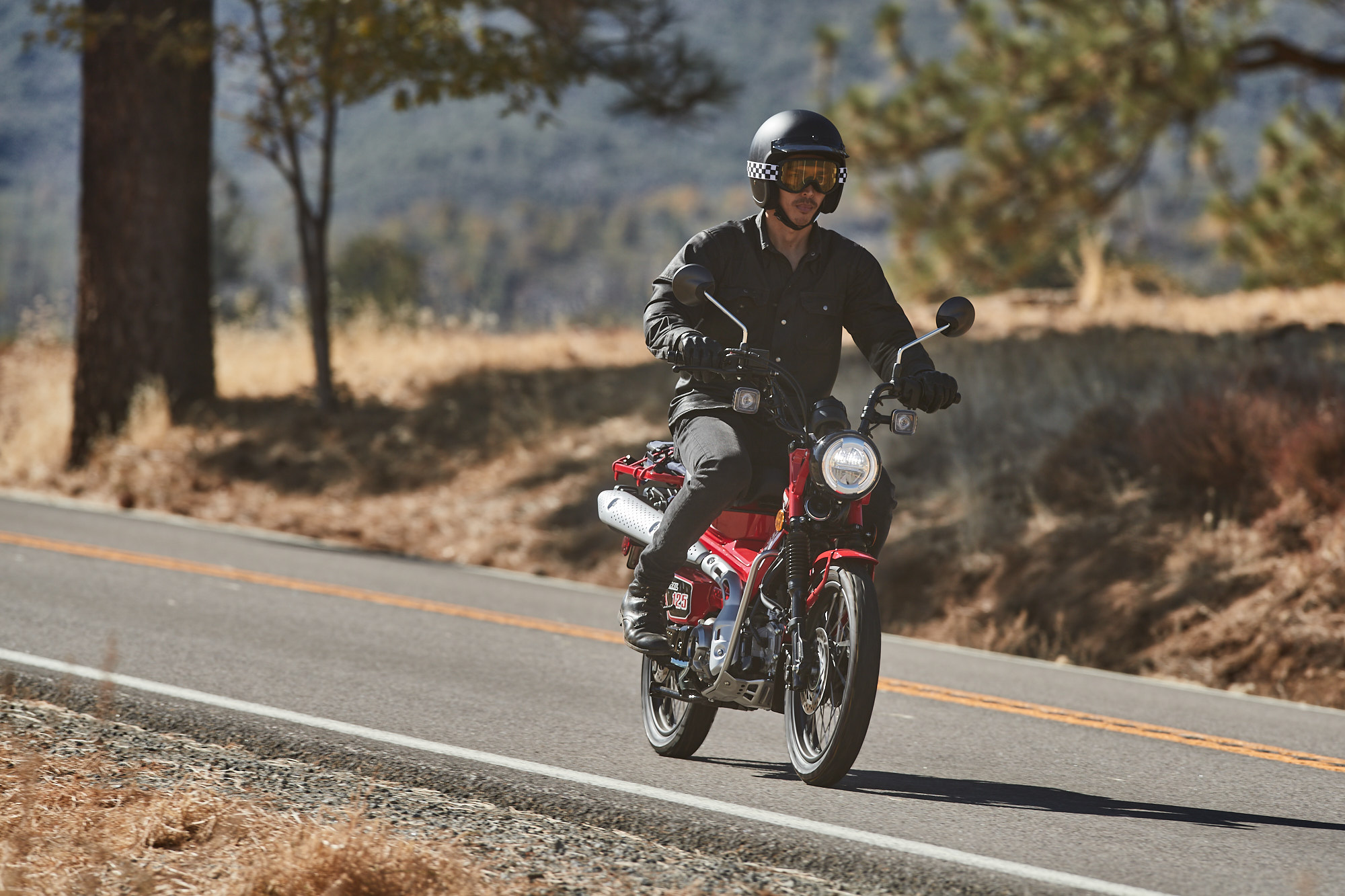 Putting all that pep in the Trail’s step is a semiautomatic four-speed transmission mated to an automatic centrifugal clutch. A 1.4-gallon tank keeps the fun going with an overall range around 150 miles. While most associate a 21/18 combo with dirt riding, the 17-inch wheels do just fine rolling on 80/90 tires and single calipers squeeze a 220mm disc fore and a 190mm disc aft. The simple setup scrubs off speed efficiently with one-channel only active on the front wheel.

Leveraging the Super Cub’s frame, the Trail 125 adopts a 27mm inverted fork to soak up bumps with 4.3 inches of travel. Twin rear shocks prop up the 31.5-inch seat height, increase ground clearance to 6.5 inches, and provide 3.4 inches of travel. The Trail’s 49.4-inch wheelbase lends more stability while the 259-pound curb weight keeps things manageable for noobs and all the more fun for seasoned vets.

Of course, all those specs don’t include the Trail’s fun factor. The only way to measure that metric is to swing a leg over the bike and we were lucky enough to ride the 2021 Trail 125 for a fun-filled day in Julian, California.

For those unfamiliar with semiautomatic transmissions, the altered shift pattern can take some time to get used to. The whole one down, five up mantra goes out the window and a less catchy neutral down, four up goes into effect. Luckily, I’m familiar with the first and neutral flip-flop, but for those who aren’t, operating the transmission is a cinch. In gear, the air-cooled motor delivered power gradually but spooled up in seconds. At the top of the rev range, engine vibrations coursed through the pegs more than the handlebars, but neither bordered on bothersome.

That’s a good thing because the Trail dials up the fun at high revs and I did my best to keep the motor singing. Leaning into a 45-mph sweeper, the wee dual-sport was surprisingly stable. As long as inputs weren’t too heavy or abrupt, feedback and response were sufficient for the Trail’s speed. Under more aggressive maneuvers, the handling teetered on twitchy, but then again, the Trail 125 wasn’t born to nail apexes. 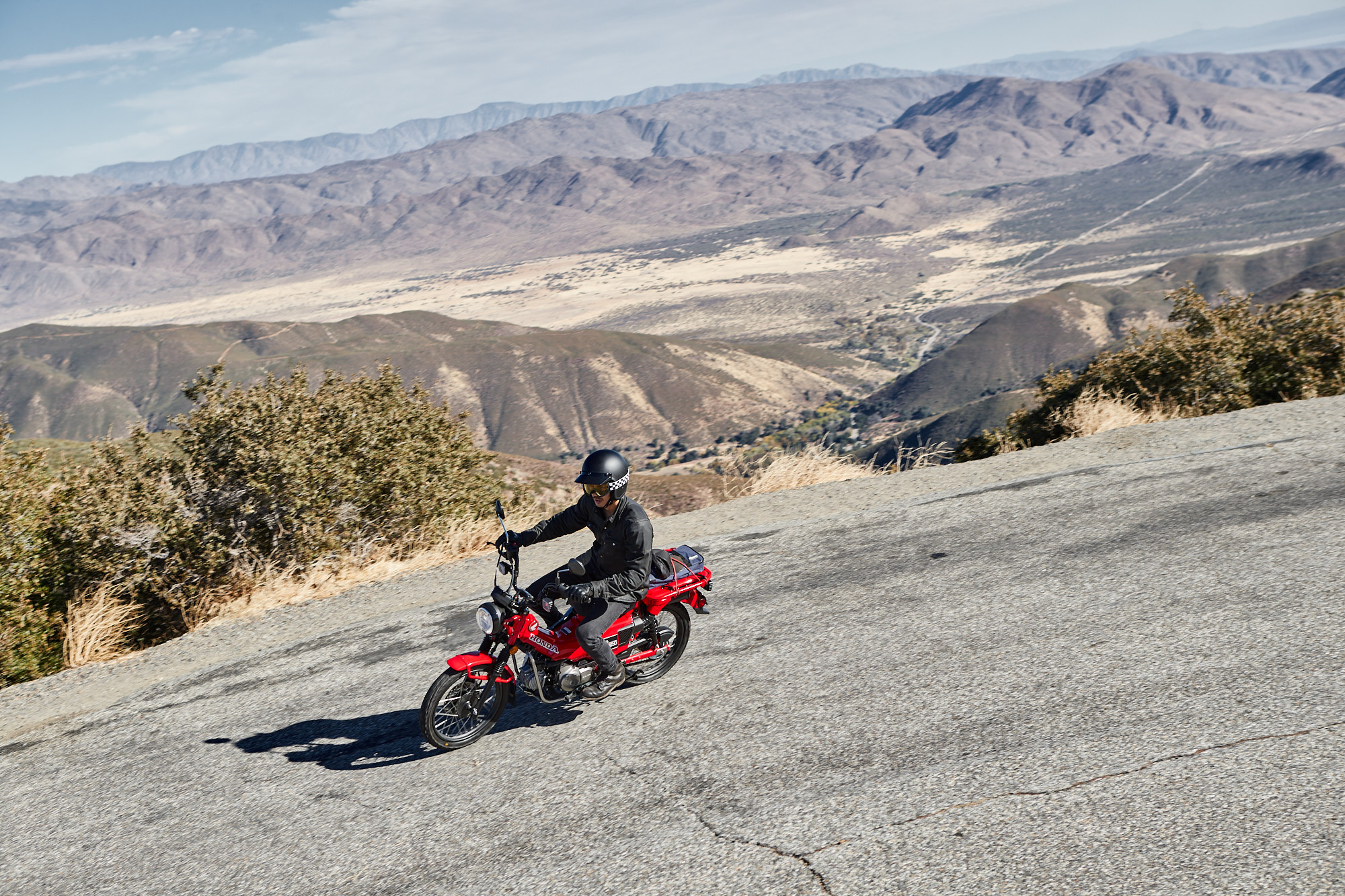 Nowhere is that more evident than on corner approach, where quick downshifts frequently unsettled the little hummer. Without a clutch lever to modulate gear engagement, banging down the gears produced a seesaw effect just before tip-in. However, with practice, a little finesse, and patience, any rider can adapt to the Trail’s automatic gearbox.

In time, I learned to let the revs subside before downshifting or leaving the bike in gear and lugging the engine out of a corner. Fortunately, the ultra-forgiving automatic transmission lets users putt around hairpins in third gear without the fear of stalling. On the flip side, neglecting the gearbox sacrificed drive upon exit, but if you're worried about that, you’re probably not in the market for a Trail 125. Yes, the automatic clutch came in handy on the tarmac, but the unpredictable nature of riding showcased the system’s full benefits.

Compared to full-sized dirt bikes, the Trail 125 offers a more approachable package for casual off-road explorers. Though it weighs more than a CRF450R, the low center of gravity, plush seat, and laid-back demeanor make trail conditions more manageable. Whether I left the motor screaming in first gear or chugging along in second, the baby Honda let me focus on the ever-changing terrain instead of the fluctuating engine speed.

In the dirt, the suspension and brakes suited the 125’s modest power output and weight. The brake pedal provided just enough feel to control slides while ABS on the front helped with unintended lever pulls. Even after catching some unimpressive (yet frightening) air, the Trail never bottomed out upon impact. Not all the OE equipment worked as well as the suspenders and brakes though. 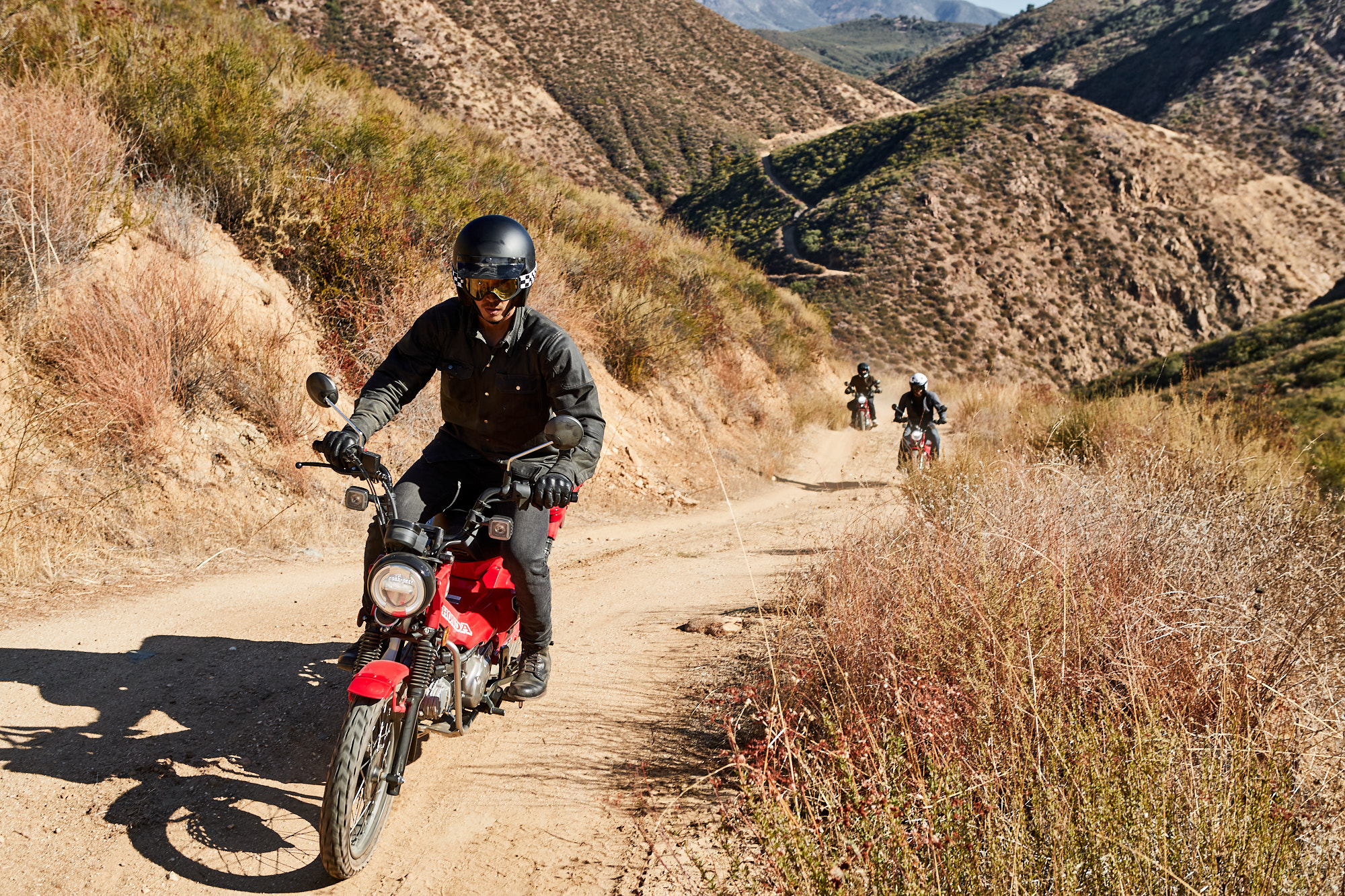 The Trail 125 rolls on dual-purpose tires and I was reminded of that every time I hit a deep sand patch. The rear kicked out on several instances and almost sent me skittering across the rock-strewn trail. Luckily, the low seat height allowed me to plant my foot in the ground and pull the bike up to me. If I owned Honda’s latest 125cc, the first thing I’d do is wrap the wheels in aggressive knobbies. On-road handling would undoubtedly suffer, but there are other bikes fit for those purposes.

With ‘trail’ in its name, it’s no wonder the new 125 is at home in the dirt. On the asphalt, it’s easy to find the pint-sized Honda’s limitations, but off-road, it helps you find yours. As the new entry in the 125cc range, the Trail adds some rugged utility alongside the Grom’s hooligan presence, the Super Cub’s sophisticated reputation, and the Monkey’s fun-in-the-sun vibe. Everyone from food delivery riders to outdoorsmen can make use of the tail rack and go-anywhere attitude.

Of course, the Trail 125 is best for those that live near, well, trails. The model’s pleasant road manners and off-road composure make it ideal for trail-adjacent riders but city dwellers could easily load the lightweight bike onto a truck for a weekend getaway. Whatever the situation, we hope customers like the very Honda-esque Glowing Red colorway because that’s the only livery the Trail receives. At $3,899, the diminutive dual-sport slots well into the brands thriving small bike catalog. If successful, the 2021 Trail 125 would be yet another feather in Honda’s miniature cap and prove that Americans like the small things in life as well.