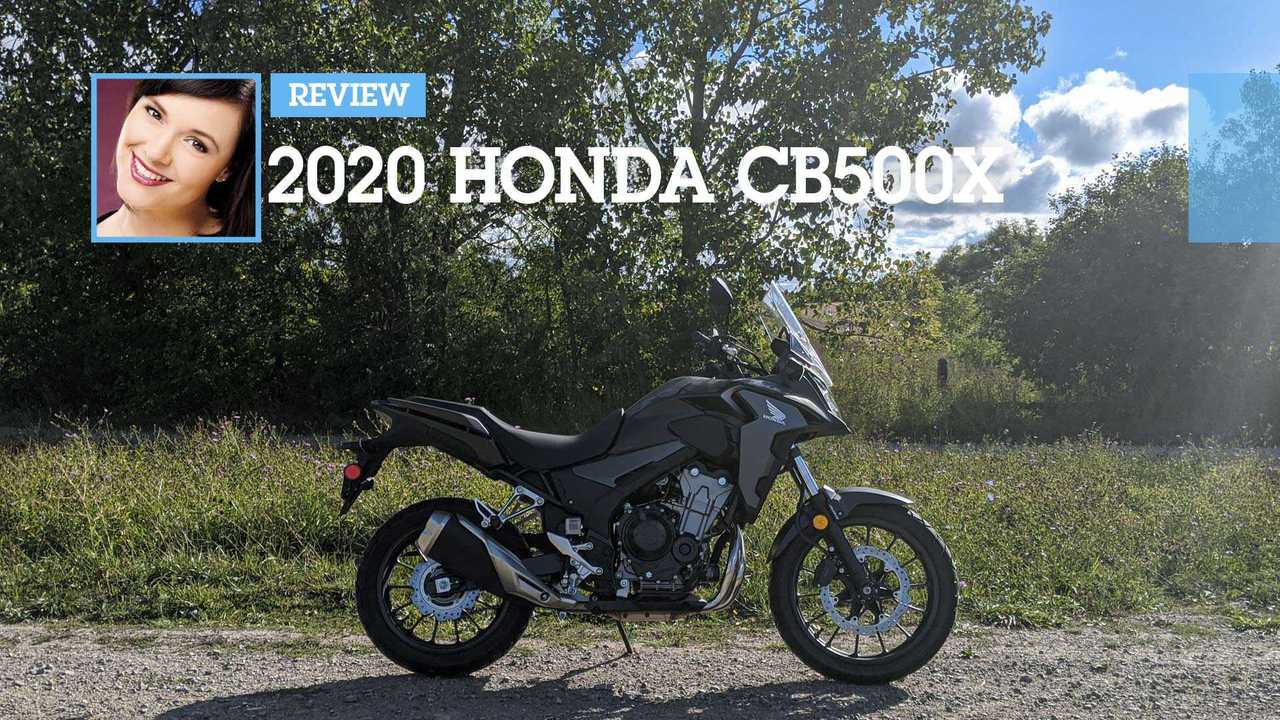 The little adventurer that goes a long way.

Let’s get this out of the way right up front—I initially booked the 2020 Honda CB500X out of “morbid” curiosity. I say morbid because I was curious about it for the all wrong reasons. With exciting mid-size adventure models like the Yamaha Ténéré 700 and the Moto Guzzi V85 TT on the market, what could Honda's aging-looking mid-ranger possibly have to offer in comparison? I was ready to be seriously underwhelmed, especially since I also had the new CRF1100L Africa Twin lined up and was very much looking forward to it.

Well, friends, things didn’t go down as I expected.

Have you ever been put in a situation where you severely underestimate something only to discover that it ultimately is one of the best things you’ve experienced? Guess what? The CB500X turned out to be one of my favorite rides of the year. I ended up asking Honda to keep it for an additional week and clocked almost triple the number of miles I normally put on a press unit. I wasn’t nearly as excited about the Africa Twin anymore.

Let’s be honest here: the X isn’t much to look at. A least not from the front. Despite a switch to LED lighting in 2019, the cyclopic headlight cluster design—shared with the CB500F—shows its age. Thankfully, when you walk around to the side, the front-end's ugliness is offset by the well-proportioned, gazelle-like silhouette. To be fair, though I’m not partial to the headlight’s design, it does an excellent job at lighting the way.

Plus, once you sit on the bike, you don’t see any of these things, so unless you find the sight overwhelmingly revolting, how much does the look really matter?

See? Pretty! Note that the matte black livery isn't available in the U.S. Sorry. Not Sorry.
Not so pretty.

The model strikes a good balance between enduro and touring. The asymmetrical wheels —19-inch circle at the front and a 17-inch one at the back—give the bike a quintessential enduro look while the barrel-chested profile and cushy, sculpted saddle sprinkle a few touring-friendly styling cues on top.

It lacks some of the features that would make it a perfect adventurer such as an engine guard, crash bars, and a high-slung muffler, but considering its modest price tag, it’s not unrealistic to turn to an aftermarket accessory supplier to fill the gaps.

For my 5’8” person, the CB500X is a fabulous fit. The 32.7-inch saddle is easy to get on without first having to step on the foot peg to swing the leg. The distance between the saddle and the pegs is spacious enough to create comfortable legroom while also making the transitions between sitting and standing a breeze. The legs’ geometry is slightly sportier than on other, bigger adventurers, but not so much that the CB loses its touring creds.

The pronounced dorsal arch makes the fuel tank narrower which creates a natural and relaxed reach. There’s virtually no weight on the hands—most of it is transferred to the bottom thanks to the upright sitting position.

That being said, the price of a more comfortable road stance is a handlebar that feels a little too off-set to the back once you stand in the pegs. It could, at times, feel like I was leaning forward on a guardrail that’s too short. It doesn't make the bike impossible to off-road, it only means that the more serious trail enthusiasts out there might want to make a few adjustments before hitting the trails.

I was surprised at how light the bike feels and how easy it was to get out of my tight parking space. Sure enough, it tips the scales at only 430 pounds, filled up and ready to go. Comparatively, the Royal Enfield Himalayan weighs 421 pounds, the Yamaha Ténéré 700; 452 pounds, the KTM 790 Adventure; 460 pounds, and the BMW F 750 GS; 493 pounds.

Psst! We Also Tested These Bikes:

I was pleasantly surprised by Honda’s half-liter engine. Overall, the mill is even-tempered—if you’re buying a CB500X expecting butt-clenching performance, you’ve got the wrong idea.
The engine is surprisingly grunty at low revolutions, which is particularly useful if you venture out on the trails. The power band’s bottom end is flexible and forgiving—you have to come close to a complete stop for the engine to gurgle and stall. In several instances of navigating rush hour traffic, I didn’t even feel the need to flick the transmission into first and happily cruised along in second. The first gear is so short anyway that the only use you get out of it is to take off—you won’t even want to use it to cruise at slow speeds.

The engine and the six-speed transmission are tuned to promote that low-end muscle because once you reach 6,000rpm in fifth or sixth gear on the highway, the acceleration becomes flat.
Don’t get me wrong, the CB500X can cruise at highway speeds (60-70 mph) without too much of an effort but the mill clearly isn’t designed to perform as well at high revolution as it does in the bottom half. Even though you’re nowhere near the redline at these speeds, it still feels like you’re straining the engine and pushing it out of its comfort zone.

Perhaps even more surprising than the bike’s torque is its fuel economy. After over 350 miles in the saddle of the CB500X, my fuel economy number hovered around the 3.6L/100km mark—that’s in Canadian, translated to American, we’re looking at 65 mpg. That’s including loads of city (and rush hour) riding, highway cruising, and even a few-mile stint off-road. Considering the bike is equipped with a substantial 4.7-gallon fuel tank, this means you could easily get 300 miles out of a single tank.

The clutch lever is light and smooth and though I found the friction point to be a bit far on the release, using the two-finger pull method worked like a charm. The gearbox itself is smooth and precise. The gears are easy to find and navigate, and kicking between first and second doesn’t require and overly exaggerated motion. On the opposite end of the handlebar, the throttle has just enough wiggle room to be forgiving on rocky surfaces.

The brake controls, however, both seriously lack bite. Whether it’s the lever or the pedal, the brake controls and the braking itself feel soft and unresponsive. That’s great if you’re enjoying a ride off the beaten paths but it requires some getting used to on the road, especially on the highway, when the traffic ahead suddenly slows down. You might want to give yourself a few extra feet of distance with the vehicle at the front.

Aside from the ABS, the bike is bare from McBare and Naked inc. It features a simple LCD with a digital rpm gauge and speedometer. There’s no computer or infotainment system, riding modes, or even traction control settings. It’s about as simple and straightforward as it gets.

It turns out that the 2020 Honda CB500X and I got along famously. You know that feeling when you sit on a bike for the first time and you immediately become convinced that it was designed for you? That’s what happened to me on the CB. So much so that I ended up buying one—possibly the easiest sale the rep made that week.

The bike is far from perfect but it checks a lot of boxes—possibly even most of them, depending what your list of “must-haves” looks like. If the few minor flaws are ones you can live with, I think you will enjoy what the Honda mid-size adventurer has to offer.

If you want a versatile ADV, whether it’s your first bike or your tenth, you’ll find that it’s an easy motorcycle to live with. It might not have the bubbliest personality of the lot, but it’s a solid and reliable pick. At $6,699, at least for me, this bike is a no-brainer.