The end of a chapter.

Do you guys remember a while bike that we got to play around with a shiny new 2020 Zero SR/F? That was four months ago. It took me a while to organize my thoughts about this whole experience. Not that I didn't know what to say about the bike, but it got me thinking about the electric motorcycle industry as a whole. Look at me philosophizing and stuff. As the year comes to an end, I decided it was about time I wrapped my Zero Chronicles up with a few final thoughts. 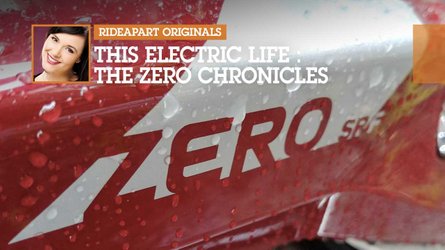 Because it’s been a long time, let’s do a little recap of everything I’ve covered in the Zero Chronicles. In August 2019, I got to spend a little over four weeks on the all-new 2020 Zero SR/F. I literally had carte blanche to do and test anything I wanted with the bike.

So I did—to a certain extent. Some of you would have liked me to put it on the track—a legitimate request—but considering I’ve never ridden a motorcycle on a track my entire life, my thoughts on the bike’s performance would have been flawed. Plus, you know… there’s just something about potentially dropping (or even sliding) a bike I don’t own that’s kind of nerve-wracking.

I decided to test the bike in a way an owner would and tried to answer people's questions about the bike and about living with electric motorcycles in general. I documented the Zero’s behavior in the city and discussed charging times at home. I then made the regretful decision to do a road trip with it and wrapped things up with a bit of good fun to test its acceleration.

I don’t know if I managed to answer all of your questions—feel free to let me know in the comments if you have more—but it sure answered some of my own. I thought I’d share them with you as my final thoughts on the Zero SR/F and as what I hope is an enlightened comment on electric motorcycles in general.

This isn’t so much a question I had than one I've been asked several times. The number of people who wondered about that was pretty impressive, but if you’ve never been on an electric motorcycle I can see how you would be curious about that.

So the answer to that question is mostly yes and a little bit of no. Does that help?

I say “mostly yes” because ultimately, the Zero feels, handles, and rides like any sportbike I’ve been on. It doesn’t feel like you're sitting on a cheap piece of plastic mounted on wheels. It feels like a proper motorcycle.

You twist the throttle and the power is all there, you pull the brake lever or press on the pedal and it slows down, you lean in and it turns. It doesn’t just feel like a motorcycle, it is a motorcycle. So in that regard, you'd feel right at home getting on one.

There are, however, some features the create a bit of an alien experience, at least the first time you go for a ride. For instance, it doesn't have a clutch or shifter. Because of that, I needed to adapt the way I used the throttle.

The throttle on a standard motorcycle reacts as soon as you start twisting the handle, right? On the Zero, there is a millimeter gap in the throttle where nothing happens. Then the following millimeter, everything happens and if you're not careful, it can happen fast. The first few times, I took my sweet time gently rolling on the throttle to make sure I didn’t send the bike flying into the curb because trust me, it has the power to go rogue if you don't know what to expect.

As I’ve also discussed before in my first impressions, riding in silence is unsettling. Don’t get me wrong: I’m no advocate of the “loud pipes save lives” movement, unlike some of you suggested. However, riding around on the Zero made me realize how much I rely on the sound of the engine—no matter how subtle or loud it is—as part of my “hey guys I’m here” strategy.

Plus, since there are no pistons firing up and down, there’s no vibration . Like, none. The bike runs extremely smoothly. It’s a very refined experience.

So, mostly yes and a little bit of no.

Is It Worth It?

I think it is.

Now, I’ve discussed my issue with the quality in my first impressions. The assembly is a bit wonky in some places (notably on the “tank” lid) and the materials aren’t all that for the price point.

So why do I think it’s worth it? Because it fulfills its purpose and it does it well. I think it’s a good bike and I’m not saying this to stroke any corporate ego. If your technology sucks, it’s harder to make things better but when the foundations are good, improving the quality isn't as big a step to take.

The controls look a little bit on the cheaper side.

The Zero has good bones and ultimately, a good technology that the company has managed to make relatively accessible. It rides well, I love how much power it can deliver, and considering its sportier stance, I would even dare say it's comfortable enough. Plus, it’s. So. Much. Fun.

I truly believe that the advantages outweigh the flaws. Everyone has their own priorities when it comes to buying a motorcycle and if material quality and assembly rank high on your list, then you’ll probably disagree with me and that’s ok. If your priority is to get in the saddle of a zero-emission vehicle that doesn’t compromise on riding excitement, then like me, you’ll probably be a little more lenient.

With the development of electric vehicles, there’s a parallel race for range extension. Who can get the most electric range out of a battery without ending up with a battery the size of a house that weighs a ton and a half? Advertising 200 or even 300 miles of range looks really good and it encourages people to transition to electric vehicles. That’s the number people think is important. I thought so too!

Not anymore. Since I had the foolish idea to take a road trip on the Zero, I’ve changed my mind. Now I’m an advocate of faster charging times. That’s one of the many things I’ve come to understand after spending 33 hours traveling on the SR/F. Had the charging time been cut even just in half, I would have spent more time riding and less time charging.

Waiting and wishing and hoping and praying.

Sadly, the Zero SR/F I had with the 6kWh charger was only compatible with level 1 and 2 chargers. This means that with the faster charger option like the one the SR/F I tested had, a full charge will still take close to two hours—that's if the battery is almost depleted.

Of course, the more range you’re able to get out of your electric vehicle, the better. The thing is, even if one charge takes you 250 miles further down the road, if it then takes two or three hours to charge, whatever time you made up for by traveling on a longer distance, you’re now losing by sitting and waiting for the vehicle to charge.

I’d rather be limited to 100-mile increments and have the bike replenish in 45 minutes. That’s enough time to stretch my legs and get a coffee but not so long that I don’t know what to do with myself. I'd rather stop more often than have to stop for longer.

So What’s The Bottom Line?

The industry sure has come a long way, but it still has a long way to go. It’s not perfect just yet and an electric vehicle isn’t quite equivalent to a petrol-powered one just yet. It’s inching closer but there is still a ways to go. The good news, however, is that people are coming up with solutions that, in the near and distant future, could potentially propel the technology forward. Whether it’s new power-storage solutions or battery-swapping technology, there’s no shortage of ideas to make things better.

As for the Zero SR/F, I would like to see the company improve its charging capacity and become fast charging-friendly and, oh and why not, improve the quality of its materials. Ultimately, it’s one hell of a bike the company came up with. While I’m more the DSR Black Forest type, the SR/F is overall a great machine. My best advice to you: go try one for yourself. You’ll understand what I mean.