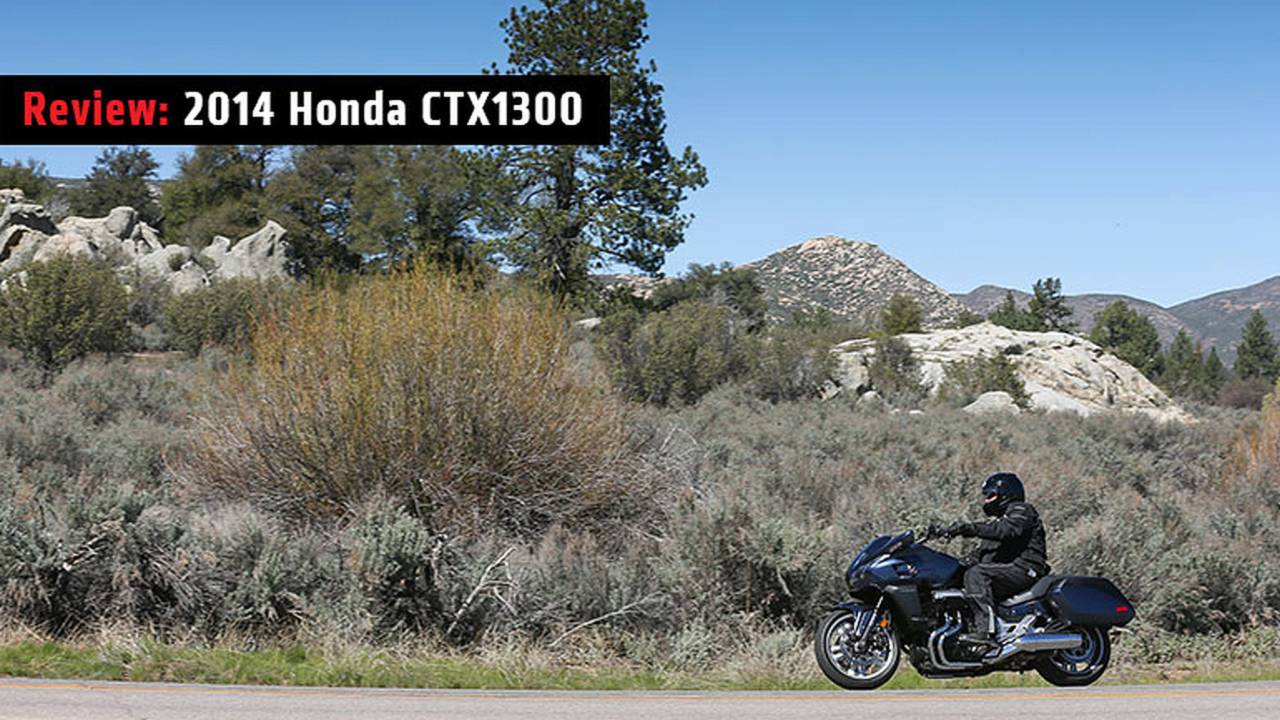 The Honda CTX1300 is an all-new motorcycle from the ground up. Take a look at the pictures. If you hate what you see, stop reading now. Nothing I say is...

Honda is not a company that acts out of desperation. Honda plans; Honda studies; Honda executes. Honda plays the long game.

The 2014 Honda CTX1300 is part of a strategy that Honda believes will point the way for the next generation of riders. Following close on the heels of the parallel-twin CTX700, the new CTX1300 is a V-4 bridge to the flat-6 Valkyrie. Honda believes that riders who are looking for a more capable, modern cruiser will be interested in the CTX1300; they also believe that riders looking for a more relaxed experience than delivered by a sportbike or dedicated sport-tourer will be intrigued by the new V-4 bagger.

I got to spend a day riding the 2014 CTX1300 in the roads around San Diego -- some of my favorite motorcycling roads in Southern California. After about 170 miles of riding, I'd had a chance to experience freeways, curvy country roads, changes in elevation, and a few hundred yards of gravel -- just about enough time in the seat to get a good impression of the all-new Honda's strengths and weaknesses.

The Honda CTX1300 is an all-new motorcycle from the ground up. Take a look at the pictures. If you hate what you see, stop reading now. Nothing I say is going to make any difference to you. If you're intrigued, welcome to the rest of the review.

Low and horizontal define the CTX1300. The bike seems to sweep back from its headlights, an impression that is reinforced with a low (28.9") seat height, and bodywork that emphasizes the horizontal. The bike comes with an integrated fairing, low, non-adjustable windshield, and integrated saddlebags as stock equipment. The fairing and plastic bodywork pretty much conceal the all-new steel double-cradle frame. This is not a fully-faired touring machine, however. The 1,261 V-4 engine peeks out beneath the covers, with 4-into-2-into-2 exhaust headers flanking the bike on each side. The gas tank is beneath the seat, effectively keeping the bike's center of gravity low.

CTX1300 has a few advanced technology features that will turn some heads. All of the bike's lighting is LED, from the headlight to taillight to turn signals to marker lights. There's a cool signature LED feature line of light that underlines the dual stacked headlights. That should give the CTX1300 a unique face on the road, and may improve visibility to oncoming traffic.

On the audio side, CTX1300 can be ordered up with a Bluetooth audio system that allows you to pair a Bluetooth helmet headset to the bike, and to feed audio to the bike via Bluetooth or USB (tucked in a covered compartment in the top of the faux gas tank). A pair of speakers is integrated into the dashboard for playback, as well. It's an interesting concept -- more of an interface and amplifier than a fully-featured audio system. There's little visual clutter, which is good. Unfortunately, unless you feed the system content, like from a connected iPod or a memory stick loaded with .mp3 files, there's nothing to play -- no AM/FM radio, no other input. You can pair your phone or Bluetooth-enabled music player to the bike and then pair the bike to your helmet -- but why wouldn't you just pair the phone or music player to your helmet? The compartment that hides the USB port is big enough to hold an iPhone or iPod, which is great, but it doesn't lock, which is unfortunate. If you don't order the audio system on the base CTX1300 (it's standard on the Deluxe), you get some ugly blank control switches on the left side of your dash, and speaker grilles in the dash, but no speakers behind them. You might as well get a sticker that says "I'm cheap."

More technology is included with the Deluxe model, like Anti-Lock Braking (ABS) and Traction Control (TC) and electronic self-cancelling turn signals, making that "I'm cheap" sticker (and the base model) seem like a mistake, considering that the Deluxe model is just $2,000 more than the base.

The story of Goldilocks and the Three Bears has to come to mind with a bike like the CTX1300. The riding position is really right in the middle of the spectrum between sportbike and cruiser. I'm 6'2" with a 33" inseam, and my knees were bent at pretty much a 90-degree angle while riding -- not stretched out, feet forward cruiser-style, and not tucked in, heels-up sportbike or even standard-style. I had plenty of room to move around on the flat seat, and I kind of liked the lower back support that I could get from the stepped pillion portion. I wasn't able to use my legs to raise my butt off the seat when I encountered rough pavement, but for the most part, the CTX1300 delivered an all-day riding position. Wind protection from the fairing and low windshield was good, directing the flow over my shoulders with minimal helmet buffeting. Even better was a taller accessory windshield, which would be a must for serious touring. There's no quick-change mechanism for windshield changes, unfortunately, but Honda techs assured me that a swap could be accomplished in about 15 minutes with hand tools. I always double the estimate, then add an hour for hunting down dropped screws and nuts.

The simple tubular handlebar sweeps back severely from the triple tree, which is initially quite disconcerting. It looks like you're going to be so far away from the steering head that you'll never get any leverage to help with turns, but ultimately, the handlebars turned out to be just right for me. They'd be easy to adjust up and down, and simple to replace with a different bend, but a flatter bar would mess with the riding position.

The "1300" part of CTX's name brings up comparisons to Honda's other V-4, the ST1300. In fact, the two bikes share engine and shaft drive componentry, but CTX has new (double-overhead) camshafts and valves (four per cylinder), and is tuned to deliver cruiser-ish low-end and mid-range torque, making it easy to ride around town. One bit of old technology is the five-speed manual transmission, which left me looking for sixth gear on the highway, mostly out of habit. Honda's not offering the DCT automatic transmission onto the CTX1300. It's been a lightning rod on the CTX700, and would have added substantial cost to a bike that's designed to appeal to more experienced riders who would be more likely to choose a manual transmission anyway.

The CTX's engine is fuel-injected and liquid-cooled, and runs on regular unleaded gas -- no premium needed here. Dual counter-balancers keep the engine smooth -- a few times so smooth that I didn't realize that I'd hit the 7,000 rpm redline until the rev-limiter flattened out my acceleration. I had no complaints about how well the engine pulled the 724-lb (reported wet weight) bike down the road. It's plenty quick, and best of all, predictable and easy to manage. Honda doesn't report horsepower or torque figures, but my seat-of-the-pants dynamometer read "sufficient." If I had to estimate numbers, I'd guess mid-eighties for peak horsepower, and low-nineties for peak torque. Just an educated guess.

As long as you ride the CTX1300 like a bagger, and not like a sportbike, clearance is not an issue. A few journalists on my wave managed to scrape the pipes on sweeping turns, but they were riding faster and pushing harder than most prudent riders would on public roads. I'm not saying they were showing off, but if might have felt that way. There's plenty of lean room available on the CTX1300 for the average rider. A track day would not be in this bike's wheelhouse.

CTX1300 is available in two configurations: the base model starting at $15,999; and the Deluxe model starting at $17,999. The Deluxe comes standard with the Bluetooth audio system, ABS with Combined Braking, Traction Control, electronic self-cancelling turn signals and blacked-out styling elements. The Honda accessories department is hard at work churning out backrests, a touring trunk, a taller windshield, cup holders, flags, teddy bears and other essential add-ons for the CTX1300.As a middle child, the CTX1300 slots in nicely between the CTX700 and the Valkyrie, and for the most part, seems like a pretty reasonable value. It's hard to find direct competitors, which means that Honda has done its homework well, finding an empty niche in a crowded marketplace. The CTX1300 is priced within spitting distance of a sport tourer like the Kawasaki Concours and a traditional bagger like the Harley-Davidson Road King, and sits in the middle of the two styles in a lot of ways.

I really enjoyed riding the CTX1300, especially thanks to its willing and robust engine. I think Honda might be right, and there will be a lot of Goldilocks who discover the middle ground when they're searching for a bike that's not too big, not too small; not too fast, not too slow. I have to wonder, though, if that middle ground isn't unoccupied for a reason. The cruiser guys who like to have their feet out in the wind rarely look for a reason to tuck them in; and the sport bike guys who find the tight knee bend too difficult seem to be moving to adventure bikes rather than easing slowly toward cruiserdom. If they choose to pause in the middle, the CTX1300 is a great perch -- this bike is just right.