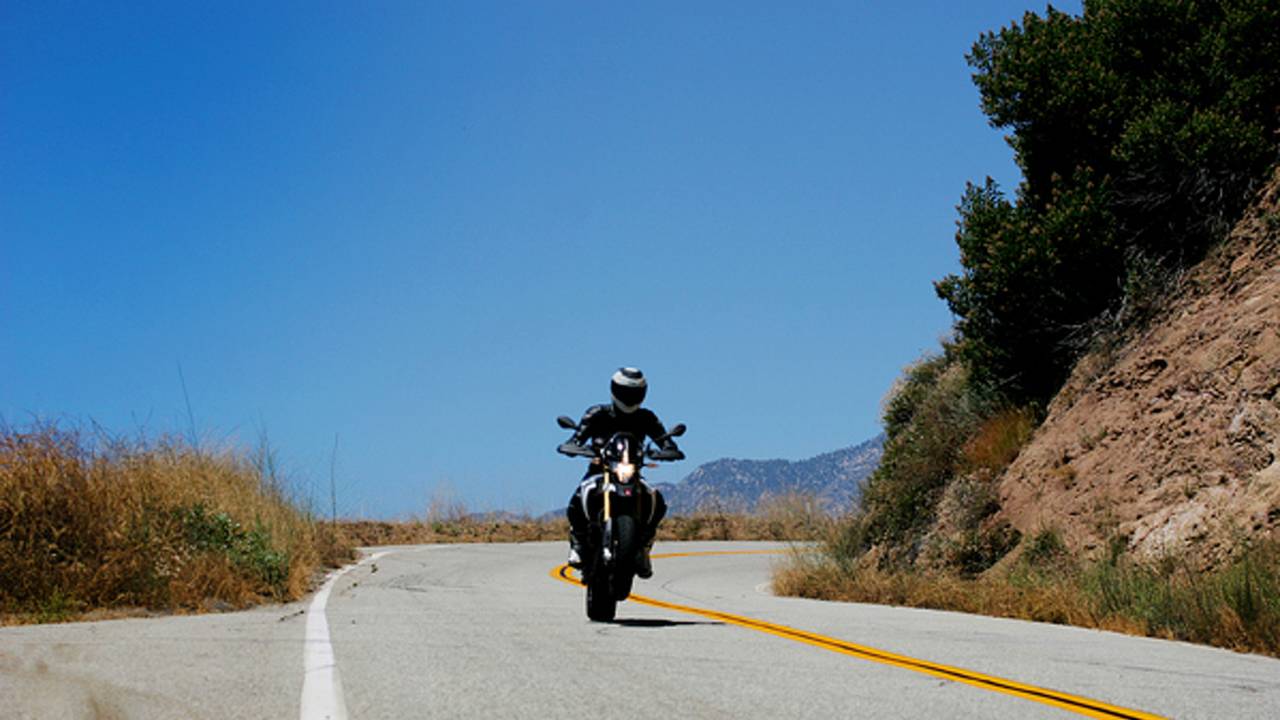 160mph indicated top speed. Leaned over power wheelies leaving almost every corner. A throttle response so addictive that you won't be able to help yourself. It's not a sportsbike, but it's faster than a 600 everywhere except right at the apex. It also puts down 118hp to the rear wheel and has an incredibly smooth and flat torque curve. As a naked bike, the Aprilia Dorsoduro 1200 has one more impressive trick: get down in a racing tuck and you'll find that the miniature fly-screen actually generates a secret bubble for you to hide behind.

The Dorso's two closest competitors, the KTM 990 Supermoto R (441 lbs wet) and the Ducati Hypermotard 1100 Evo(377 dry), are quite a bit more trim, but its portly 492lbs of weight are just not a big deal. Bikes competing in this class of motorcycle aren't racing bikes; feel is much more important than outright speed and the feel of the Dorso is confidence inspiring. Really. Despite the heft the bike feels nimble — comparable to the Yamaha WR250R we're also running around on right now. You can get closer to the bars and the hand grips are much closer together than the widespread variety you'd find on a Hyper. The seat is tall and the pegs (while not low enough to scrape) allow your legs to stretch quite a bit more than a sportsbike would.

Like really fast. With 130bhp at the crank, it absolutely blows the 95bhp Hypermotard away and embarrasses the 114bhp KTM 990 Supermoto R too. Peak torque is only 75lb/ft, but it makes nearly all of that before 3,000rpm and the additional couple of lb/ft build ever so slowly before things begin to drop off at the end of the rev range.

Drop three gears and dump the clutch while braking hard to get a little sideways on corner entry. You'll feel like a superhero. Though the 27.3º rake is only .7º away from a Diavel, it's set up that way for a reason. You'll be happy to have that rake for stability at 160mph and the rest of the time, turn-in will be so blazingly fast that you'll never wish for steeper geometry.

The Dorso 750 was endowed with a flexy flyer chassis and crappy forks. Even Aprilia factory techs admit to that. Not so with the 1200. Forks have been upgraded to fully adjustable Sachs units that are easy to adjust on the fly. Once you've got your sag set, you can adjust compression and rebound without ever leaving the seat using just the pointy end of the key. It's nice when one fork handles compression and the other handles rebound. The shock is also from Sachs and is also fully adjustable, though it's disappointing to see whiz-bang adjusters on the forks and a boring old set of preload rings out back. The chassis itself is awesome and has been significantly upgraded from the 750. Tube diameter is up from 30 to 32mm, and they're 1mm thicker too. Extra plates have also been added around the steering head to increase stiffness. As a package, it does nothing but inspire confidence. Front end feel is good enough to trail-brake all the way through downhill decreasing radius corners after just a few hours on the bike. Rear end feel is just as good. If you're dragging your knees a bit and feel like you're on the edge of the tire, you probably are. Most owners will likely end up swapping to a steepr 190 rear for a little more lean angle.

Ride it like a road racer, a supermoto or just sit on top. In most circumstances, it doesn't matter too much. The seat is a little too tall and the factory fitted 180 rear tire too flat if you're used to dragging your knees on sportsbikes, but if you hang way off and stick your knee way out, it'll likely touch just as you're rolling onto the very edge of the rear tire. The ideal riding style for going fast on the Dorso is a mix between proper roadracing and supermoto (think Eddie Lawson on a KZ1000R). Scoot back in the seat and brake late, turn in, hang off and get to full lean as fast as possible, hit your mark, then stand the bike up, scoot forward and roll the throttle wide open to pick the front end up once you can see the corner exit. The Dorso feels like it was designed to be ridden this way.

Even comfortable enough to be used as a touring rig if you compliment its already nice fit and finish with the right accessories. After a 300-mile day on a Hyper, most riders would be spent. Something about the wind blast, seating position and the seat itself make it uncomfortable when it comes time to do some distance. In stock form, the Dorso is pretty decent for a long day on the road. The seat is plenty comfortable, the pegs have removable, thick rubber pads that deaden vibration and the bars are in a sensible place. Aprilia offers factory saddle bags, a tank bag, tail bag and tank side bags, as well as an extra comfy gel seat for the Dorso 750 so I wouldn't be surprised to see the same become available for for the 1200, along with taller aftermarket windscreens.

It manages the unexpected

Smart aerodynamic styling comes out to play on the Dorso. Radiator exhaust is ducted away from your legs and those large tank shrouds are great to tuck your knees behind. The flimsy plastic hand guards start to make sense when you realize they actually do keep wind off your hands and that miniature fly-screen is designed so that at speed, there's a bubble of still air to hide behind (a feature you won't find on the Super Duke or Hyper or any other supermoto-style bike for that matter).

But it's not for pussies

Reviews elsewhere have seen the big Dorso take criticism for its snappy throttle response in Sport Mode, but this is not a relaxed Sunday cruiser. If you find it's most comfortable in Rain Mode, you should probably just get on another bike. This is a damn serious motorcycle and it demands respect.

In fact, aside from the KTM 990 SMR, this is the first supermoto-style, large-capacity bike we've ridden that actually makes sense. Unlike air-cooled rivals, the power is there for supermoto-style wheelies every time you open the throttle and the control is even there for supermoto-style slides. Aprilia enthusiasts have bemoaned the disappearance of the old v-twin Tuono from the model range in the run up to the North American release of the new V4 model this fall, but they shouldn't. This Dorsoduro has all that old character and performance while managing to be approximately the sexiest-looking new motorcycle that's been in our hands this year. Can't say that about the old Tuono. Everyone we know that's seen it, sat on it or ridden it is now trying to find a way to buy it. That shouldn't be too hard; at $11,999 it's the same price as the slower Ducati and $2,000 cheaper than the KTM.