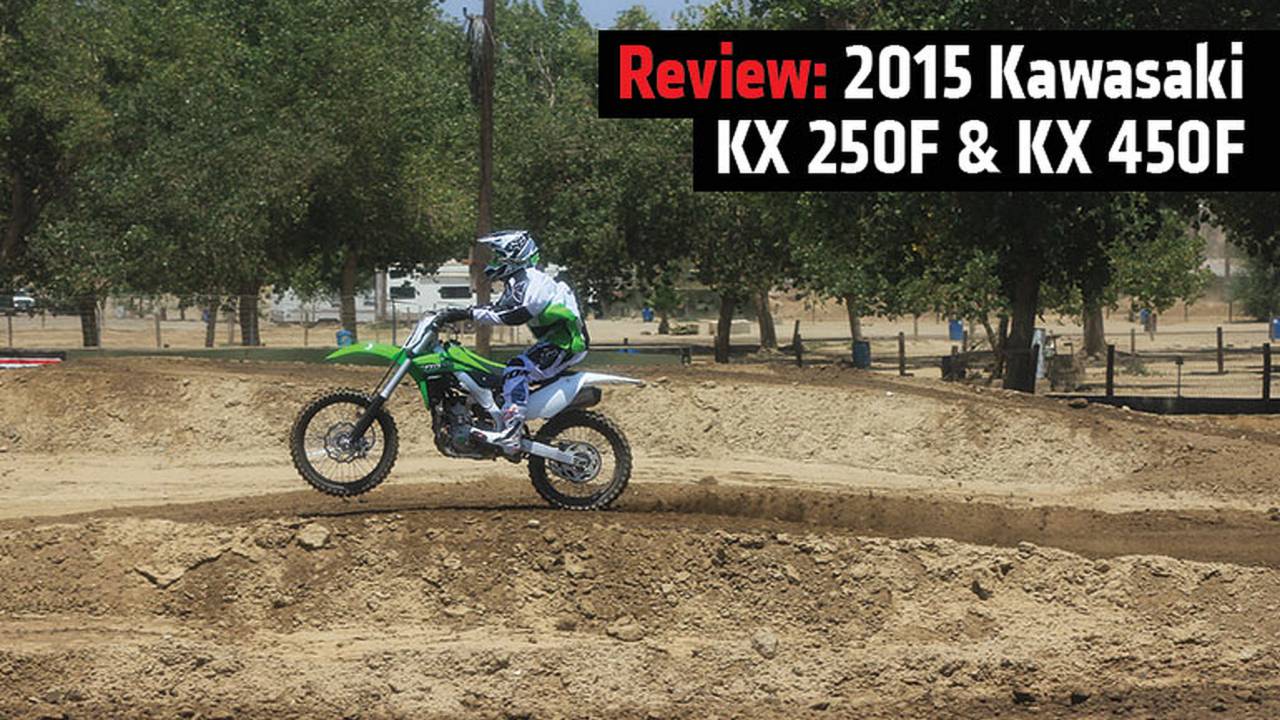 Getting dirty is part of summer and the new 2015 Kawasaki motocross line up is ready to take you on the ride of your life with championship technology.

Dirt; It is where I first learned to ride a bike. So naturally when Kawasaki invited me to try out their new 2015 lineup of dirt bikes, I jumped at the chance.

I hadn't ridden on dirt in a very long time, so the first thing I decided to do was give the Kawasaki KX110 and KX140L a few spins on the Milestone MX tracks. Satisfied that my abilities were up to snuff, I hopped on the new KX250F. Before taking off, a representative from Kawasaki warned me that the throttle was very, very "pitchy". Taking the advice into account, I moved out from the staging area slowly. Once I was in the clear I gave the two-wheeled fiend a twist of the wrist. Luckily for me, I was ready for what came next, a quick snap of my neck and perhaps even a bit of wee if I'm honest.

Sporting a few noteworthy changes for the 2015 year, the KX450F has benefitted from an increased front brake, which now stands at 270mm, over the previous 250mm. The rear brake is also substantial, coming in at 240mm. Getting the heart of the KX450F, a new box-bridge piston has been taken from the factory race teams engine and is now utilized, which makes for a more durable engine, ready to rev to high hell and back. And yes, it does weigh more, however, Kawasaki was thinking ahead and so they lightened the wrist pin, which negates any extra heft that the piston created. Sweet!

Also featured on the new KX450F is a more capable DFI System, which has three settings (soft, standard and hard) for those who really want to make the bike their own. If that wasn't enough, Kawasaki has, as an option, the Kawasaki Racing Software Kit, which is the very same software that the factory and personal teams use to really dial in the mapping of the ECU.

What is the best, and potentially vexing for future 2015 owners, is the new front Showa fork system called the Separate Function Fork (SFF) with a Triple Air Chamber (TAC). Pretending to understand what the Kawasaki engineer was talking about, I nodded my head in agreement for 15 minutes while he spoke. Basically, the way the front forks are broken down is in two parts, duh. One fork is solely engineered to handle the damping forces (left tube), while the more familiar and traditional pneumatic spring is housed on the right tube. As for the TAC bit, the left fork is separated further, into 3 chambers. The most inner chamber is under high pressure, while its surrounding outer chamber is low pressure and the lowest chamber is again high pressure. All this creates a tug of war between the three chambers that push and pull each other, allowing for infinite adjustability and dampening, while having the benefit of a lighter front fork than if it were a traditional spring set up. After using the Kawasaki Genuine Accessories 0-300psi Digital Air Pump, which I might add is included with every KX450F, I found just the right amount of dampening needed for the jumps and riding style that I was feeling that day. Having the team mechanics on hand really did help and I can see how it might be a struggle for owners to find their own optimal settings, so have patience, because once you find your own favorite sweet spot, you'll wonder how you ever got along without it!

To say that the 2015 KX250F throttle is "pitchy" is an understatement. I cannot recall another bike in recent memory that had the instant hit that this particular bike had, not that this is a bad thing. In fact, once I got used to the throttle, which really should just be called an on/off switch, I kind of liked it. I tend to ride with more linear lines than swooping one, so the throttle suited my style on the track. Hit the throttle, make a long run at WOT (wide open throttle), ease up, turn (with engine braking rather than actual braking) and then hit the throttle again. It all works out great.

What was not great however was that elusive je ne sais quoi. Scratch that, I know exactly what was missing on the 2015 KX250F, bottom end power. Sure the bike kicks you in the head when you even think about turning the throttle, but once you regain your vision, the bike seems more bark than bite. I wanted to feel the bike giving me reassuring torque, but it didn't really have a great amount of grunt. All the noise and racket that the bike produces feels like it goes into a more top speed profile rather than a low end band.

On the track the 2015 Kawasaki KX450F is everything you can ask for in a bike. It has a very broad power range with the low down torque the KX250F was lacking. I was instantly smitten with the 450. In the turns the bike felt true and stable. Using the throttle to steer my turns was poetry in motion. Taking the jumps as far as my luck and insurance premiums would allow, I landed softly with the Showa jazzy forks doing their magical work superbly. The adjustability of the handlebars and four different footpeg positions, allowed me to further exploit the inherent usability of the KX450F. This, in addition to the aforementioned engine mapping and fork dampening allows for a customizable ride that would make a more pedestrian bike feel truly comical.

Ability to customize and tailor the bike (ECU/Suspension)

Takes a long time to dial it in

Give you the air compressor but not the software as part of the deal. Wish it wasn’t an optional purchase.

Some tutorial videos would be nice to navigate through tuning my bike at home.

Kawasaki has excelled once again with their KX450F. The low center of gravity and focus on weight savings has really made the bike more nimble and yet very solid in its feedback. The engine produces power throughout a very broad rev range and coupled with all the lightened bits, makes for a convincing ride anyone will enjoy. Aside from the dial-in time to get your bike right where you want it, the KX450F has drawn a literal and proverbial line in the sand, er, dirt.