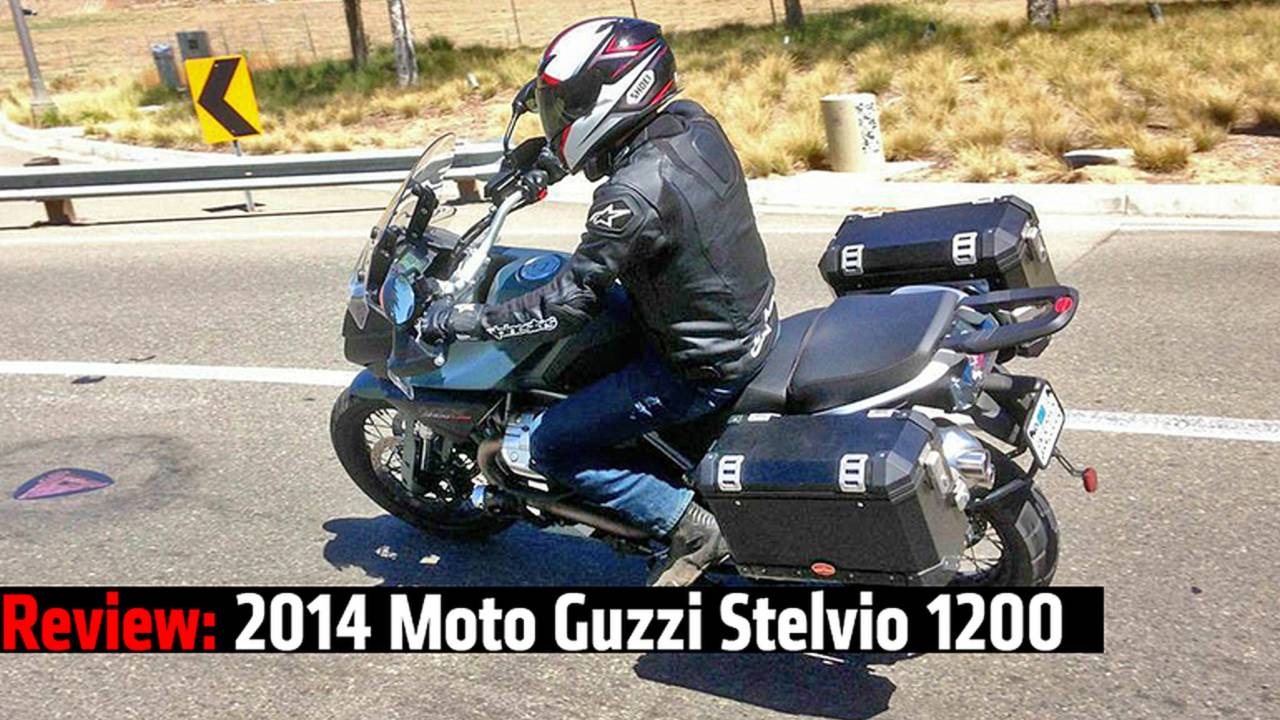 Moto Guzzi’s go anywhere, do anything flagship has set its sights on BMW’s vaunted R 1200 GS (read the review). Moto Guzzi's meaningful changes throughout the years were intended to elevate the NTX into a competitive posture with segment heavyweights. So, does it stand up against the best of them?

Right off the bat, you’ll notice a few common traits between the Stelvio 1200 and R 1200 GS. Notable similarities include a longitudinal twin engine, single-plate clutch, 6-speed gearbox, shaft-drive and a single-sided swingarm. But there are two important differences.

Rather than playing copycat with BMW’s polarizing telelever setup, Moto Guzzi wisely stuck with traditional telescopic forks for better front-end feel and quicker steering (the telelever system prevents nose diving under moderate braking). Another key difference, albeit of an inconsequential nature, is the 90-degree, across-the-frame placement of the Stelvio’s V-twin. Admittedly, the bike does lurch slightly to the right when you gas it in neutral at sub-10mph speeds, but this is a nonissue for most riders – me included.  That said, choosing the right bike will likely come down to personal preference and, of course, pricing – more on that later.

To get a better sense of the Stelvio’s on-and off-road character, I ventured from Los Angeles to Anza Borrego, CA with the goal of conquering the perennially-popular Jasper Trail.

As is the case with virtually every adventure bike on the market, the Stevio’s well-thought-out ergonomics yield a supremely comfortable riding position to help mitigate fatigue during lengthy rides. The saddle offers two height positions to accommodate a variety of body types. At 5’ 11”, I felt right at home on the standard/low setting, leaving me to believe that the ‘high’ position will provide the right amount of adjustability for taller riders. Likewise, the windscreen extended just far enough to direct air around my helmet while riding in a neutral, upright position. Best of all, logically placed lower controls, a well-shaped fuel tank, swept-back handlebars, as well as a surprisingly light clutch pull means there’s no learning curve to the Stelvio 1200.

In motion, the Stelvio’s low center of gravity and relatively minimalist bodywork belie its portly 598 pound curb weight. And while a comparably-equipped 1200 GS undercuts the 1200 NTX by nearly 100lbs, the Moto Guzzi can match the BMW step-for-step when it comes to braking performance, road holding, and, believe it or not, urban maneuverability.

The Stelvio offers one of the finest suspension setups in its category. The standard Marzocchi fork and Sachs rear shock work together harmoniously to soak up the rough stuff while preserving a high degree of road feel. When the pavement ends, however, the Stelvio is a mixed bag. Its comparatively low ground clearance and extreme poundage proved to be a handful in precarious off-road situation like tight switchbacks and rocky terrain.

If your terrafirma excursions consist mainly of manicured fire roads, the Stelvio will suffice. There’s no heavy-handed intervention from the standard traction control system, though it can be deactivated via the instrument cluster. And regardless of the road surface, the 105-horsepower, 1,151 cc mill produces most of its torque from about 2,500 rpm, making the Stelvio easy to lug in lower gears.

Acceleration and overall refinement are the areas in which the BMW reigns supreme. The Stelvio is by no means a slouch in a straight-line, but the GS boasts a superior power-to-weight ratio along with a smoother, more linear power delivery. Additionally, the numerous vibration attenuation measures made to the latest Stelvio haven’t gone far enough. Even at highway speeds, the Moto Guzzi vibrates noticeably more than both the BMW GS and Yamaha Super Ténéré ES. Stelvio riders are also subjected to a considerable amount of radiant heat emanating from the left side of the bike.

At the end of the day, the Stelvio effectively muscled its way - albeit perilously - through all 11 miles of Jasper Trail’s rock gardens, moguls, and high-speed sweepers. Suffice it to say, this was an extreme test designed to reveal the Stelvio’s limitations. Therefore, the Stelvio is more than capable of dispatching fire roads and access trails with total aplomb.

Based on real-world fuel economy figures, the Stelvio’s newly standard 8.5-gallon fuel tank delivered approximately 320 miles of range during highway riding (39.6 mpg) and right around 270 miles with a near-50/50 mix of city/highway riding (32.1 mpg).

Starting at $15,990, the 2014 Moto Guzzi Stelvio 1200 NTX checks in right around $2,000 under the BMW R 1200 GS Adventure and about $300 over the Triumph Tiger Explorer. Yamaha’s Super Ténéré ES shares a similar opening price with the Stelvio. A fully-optioned Stelvio NTX fitted with accessories like an aluminum top box, heated grips, panniers, and an anti-theft system rings in at $17,000, while a similarly-equipped 1200 GS Adventure will set you back roughly $21,300.

Other than revised graphics and a new Amazon Green paint scheme (not available in Canada), the ’14 Stelvio carries over unchanged.

Though I was willing to overlook the Stelvio’s middling nighttime illumination and lack of a proper gear indicator, the merciless radiant heat and excessive vibration detracted from what could have been a brilliantly well-rounded package.

Cruising range is crucial with any adventure bike, and the Stelvio demonstrated it could deliver a bladder-busting 320 miles between fill-ups. Combined with exceptional ergonomics and unexpected standard equipment like traction control, ABS, hand guards and aluminum panniers, the Stelvio makes a worthy alternative to such established entrants from BMW, Yamaha, and KTM. What’s more, the Stelvio’s sub-$16,000 sticker price hits a sweet spot between the category’s major players.