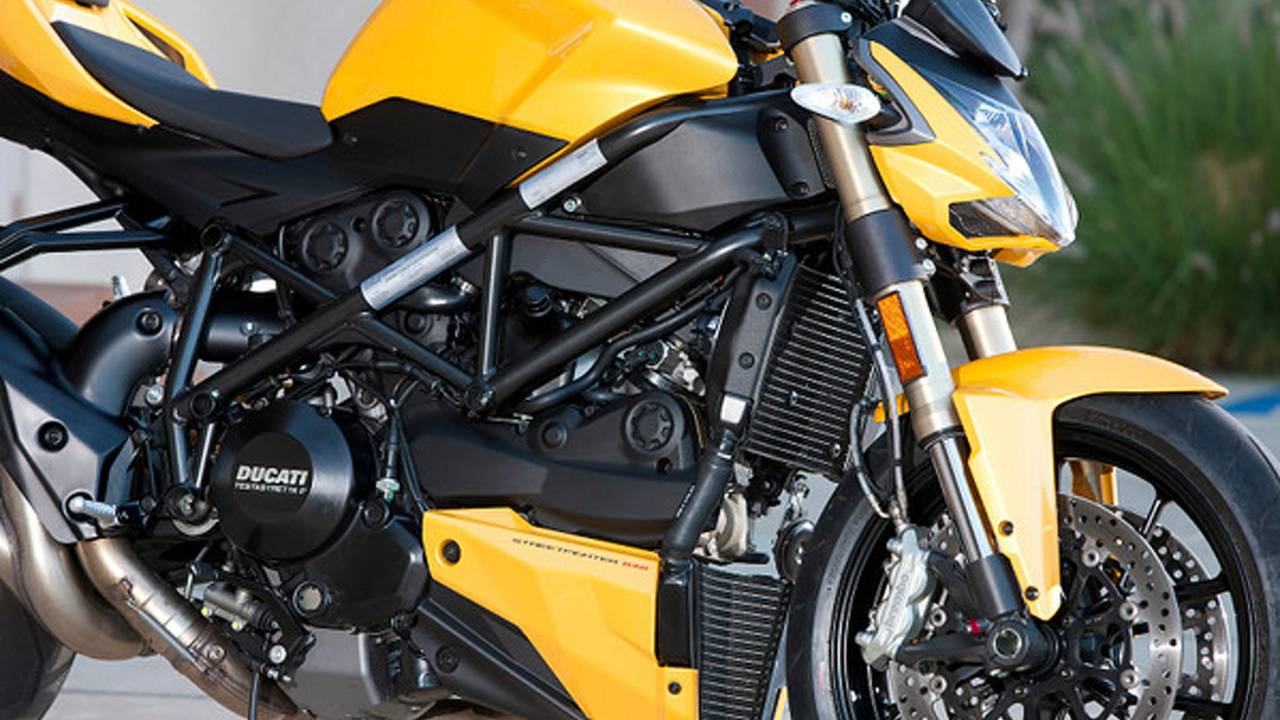 Speaking at the US media launch of the Ducati Streetfigher 848 yesterday, North American general manager Dominique Cheraki described his ideal motorcycle — a real sportsbike sans the fairings and equipped with high bars to make it comfortable. The perfect bike for riding fast on real roads, whether they be city streets or mountain curves. That’s certainly not a new concept, but it’s not one...

Speaking at the US media launch of the Ducati Streetfigher 848 yesterday, North American general manager Dominique Cheraki described his ideal motorcycle — a real sportsbike sans the fairings and equipped with high bars to make it comfortable. The perfect bike for riding fast on real roads, whether they be city streets or mountain curves. That’s certainly not a new concept, but it’s not one that’s ever before been fully realized; in the translation from faired to naked, the handling and performance that makes a sportsbike a sportsbike has traditionally been lost. Is this new Streetfighter finally the real deal? A naked 848 Evo? Not really, but that’s not necessarily a bad thing. Photos: Brian J. Nelson The difference between fast and slow Spending the first half of the day riding in the mountains around Idylwild, California in a pack of other journalists, I was prepared to write off the little Streetfighter. You see, we were trickling along, slow as can be, while the group struggled to pass cars, negotiate corners and figure out the right way to turn at junctions. At this pace, you’re left without much to focus on but the suspension’s inability to deal with bumps — upright or lent over — the motor’s rough recalcitrance below 4,000rpm and the ergonomic...compromises that seem to go hand-in-hand with the Ducati badge. Then after lunch and photos, apparently as frustrated as I was, Dominique took charge and took off, leading Cycle Canada’s Neil Graham and I down the mountain to the 10 at a much healthier speed. It’s a good thing he did, because riding the Streetfigher 848 fast reveals an entirely different motorcycle. It says something about a motorcycle company when the boss is actually a real rider. Ducati, for all its cruisers and catwalks and own-brand wine still knows how to make a fast motorcycle. In the case of this Streetfighter, a very fast motorcycle. What makes a Streetfighter So the Streetfighter 848 is not an 848 Evo with the fairing removed and high bars fitted. I’m scoffing at the idea of referring to its bars as “high.” Instead, it’s a Streetfigher 1098 with a new motor, the suspension from a Ducati Monster 1100 and a few tweaks to make it handle better and look nicer. Rather than the faired supersport’s 140bhp twin, the Streetfighter uses an 849.4cc version of the Testastretta 11° motor that gives the Multistrada 1200 and Diavel their 15,000-mile service intervals. That 11° refers to overlap between inlet and exhaust valves. That and some other internal changes put the emphasis on low-rev torque and smooth power delivery over the 37° overlap of the 848 Evo motor and its outright, high-rev power. This Streetfighter makes 130bhp at 10,000rpm and 69lb/ft of torque at 9,500rpm. Don’t let the close proximity of those two peaks fool you, this is a flexible engine, check out how broad and flat that torque curve is.

Should I buy one? Not if most of your riding is in town. The upright ergos and low-down punch of of the Ducati Monster 1100 would be much better. Not if you need to spend over half an hour on the highway on a regular basis. There’s no turbulence because there’s no bodywork, so wind blast isn’t a problem in tight leathers, but it would be in baggy textile gear. Again, the ergonomics are a limiting factor here. The seat is a board, the bars are incredibly low and the pegs are very high. But, if you’re looking for something exclusively to play with, something to ride in canyons or up and down mountains all day, you’d struggle to do any better than this bike. It’s light, agile and fast, but it’ll make all that accessible to relatively inexperienced riders too. It’d be a great first fast bike for someone coming off an SV650 or a Monster or a great fast bike for people tired of trying to make bikes designed to win races work on the road. Like real world, real road corners? This Streetfigher 848 is the bike for you.
++
Got a tip for us? Email: tips@rideapart.com