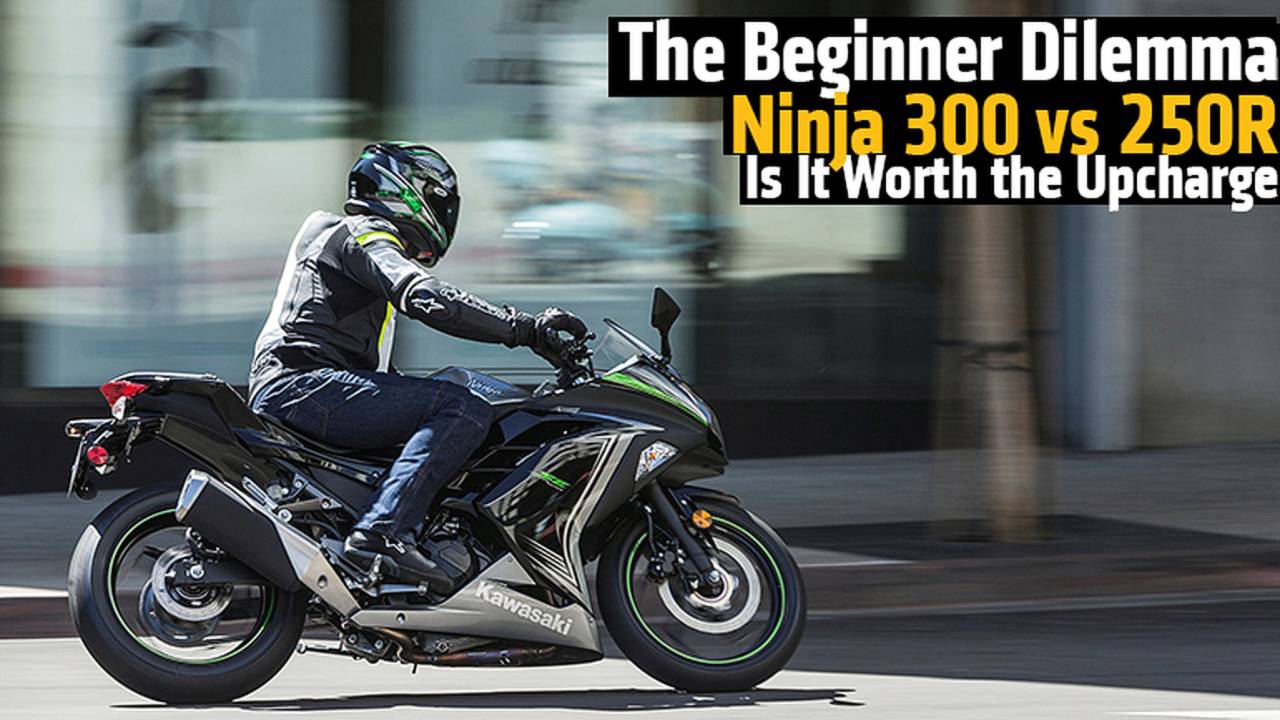 For the past few months, I've had the privilege of riding a 2014 Kawasaki Ninja 300 SE. My initial reaction was subdued excitement because, honestly, I didn't expect much. I already own a Kawasaki Ninja 250R, so how big of a difference is an extra 50cc? Turns out it's a lot! Kawasaki bumped up to the Ninja 300, from the Ninja 250, two years ago. The 300 has remained essentially unchanged since it's bump in displacement. So why are we writing about it now?

In all my online research of Kawasaki's entry-level Ninja, there’s one thing I’ve noticed: Many people have trouble deciding between an older, cheaper 250R and the new 300. For those starting out, it’s hard to gauge the value of an extra 50cc and something like a slipper clutch. New riders may see 250Rs regularly going for $3,000 on the used market, while the 300 is typically around $5,000 new ($4,200 or so used). That’s a difference in price that would cover some nice gear— maybe some graphics and aftermarket goodies. But allow me to shed some light on a few details after living with both bikes.

At start up, the biggest difference between the 250R and 300 is by virtue of fuel injection. On cold start ups, the 300 starts right up with a flash of the LED dash, and it's a smooth idle—regardless of ambient temperature. The 250R’s start up? Well, you’ll have to fiddle with the choke to get it running smoothly. We never got the fuel injected version of the 250R here in the United States, which is a shame, but the carbureted version is hardly a deal breaker.

Visually, more than a few people gave surprised looks when I told them the bike is actually a 300, not a 600. The 300's fairings are very similar to the larger Ninja models, but a trained eye can easily spot the difference. Side-by- side, the lines on the 300 give it a wider and more aggressive appearance in comparison to the 250R. I consider the 250R to look a bit dated now, to be honest.

There’s a feature I really enjoyed that a few of you may laugh at: the digital clock on the dash. Yes, yes, I know, it’s not exactly an uncommon feature on modern bikes, but coming off of a 250R makes it a really a nice touch. I found myself consistently taking a look at it when running errands or when running late somewhere.

READ MORE: Is It Worth the Upcharge? The Moto Guzzi V7 Range

You're dead wrong if you think it's all about peak horsepower numbers. I feel like, at times, people compare cc ratings of motorcycles in a similar manner. With motorcycles in particular, there’s an attribute that I feel is often understated—torque. In a recent dyno comparison, the Ninja 300 produces 18 ft/lb of torque to the wheels compared to just under 14 ft/lb on the 250R. On paper, the difference is miniscule, but considering the 300’s taller gearing in addition to it’s HP boost, the 300 is simply a more comfortable bike around town. The added power is also a blessing when merging on freeways.

It had a steady pull through all gears and didn't seem to matter where you were in the RPM range—it had enough power to get going. Yes, occasionally you'll need a downshift or two to pass a car, but the torque curve helped make the bike incredibly easy to ride and comfortable.

The level of confidence inspired by the stiffer chassis, revised front forks, and slightly wider rear tire on the 300 is what surprised me the most. On the twisties, the turn-in on the 300 is razor sharp; making the 250R feel a bit vague. The 140mm width rear tire gives the suggestion to get on the power a little earlier out of a turn. Although, this is a change that can easily be applied to a 250R as well, which featured a 130mm in its last year of US production.

The 300 SE model comes standard with ABS and this alone might be worth price, for some. Thankfully, I only got to test the feature once while commuting. The response is quick and is certainly helpful in keeping the rubber side down in emergency situations.

I was also excited to try the 300’s slipper clutch. This feature allows for much smoother downshifts and should you downshift too far, it won’t lock the rear wheel as easily. The 250R does not have a slipper clutch and some may argue that it’s an unnecessary luxury on a beginner bike. It’s really only needed when riding hard, but I can see how manufacturers could make an argument for safety with its inclusion.

If you can afford the 300, definitely buy it over a used 250R—it’s a superior bike in nearly every way. It'll also come with a warranty and monthly payments. It has flexibility as a motorcycle for beginners or experienced riders. We had the 300 for a few months and traded it with other members of the staff. Most everyone said they'd be happy to own the bike, no matter their experience level.

The Ninja 300 marks an evolutionary pivot from what everyone has become accustomed to for a beginner bike, but how long will it reign supreme? Rival manufacturers are producing more 300s and there have been impressive responses for 2015. The Yamaha R3, Honda 300R and KTM RC390 are expected to make a valiant run for the top this year. I’m anxious to give those bikes a try before crowning Kawasaki, but the Ninja 300 is certainly a high benchmark.