Is It Worth the Upcharge? The Moto Guzzi V7 Range 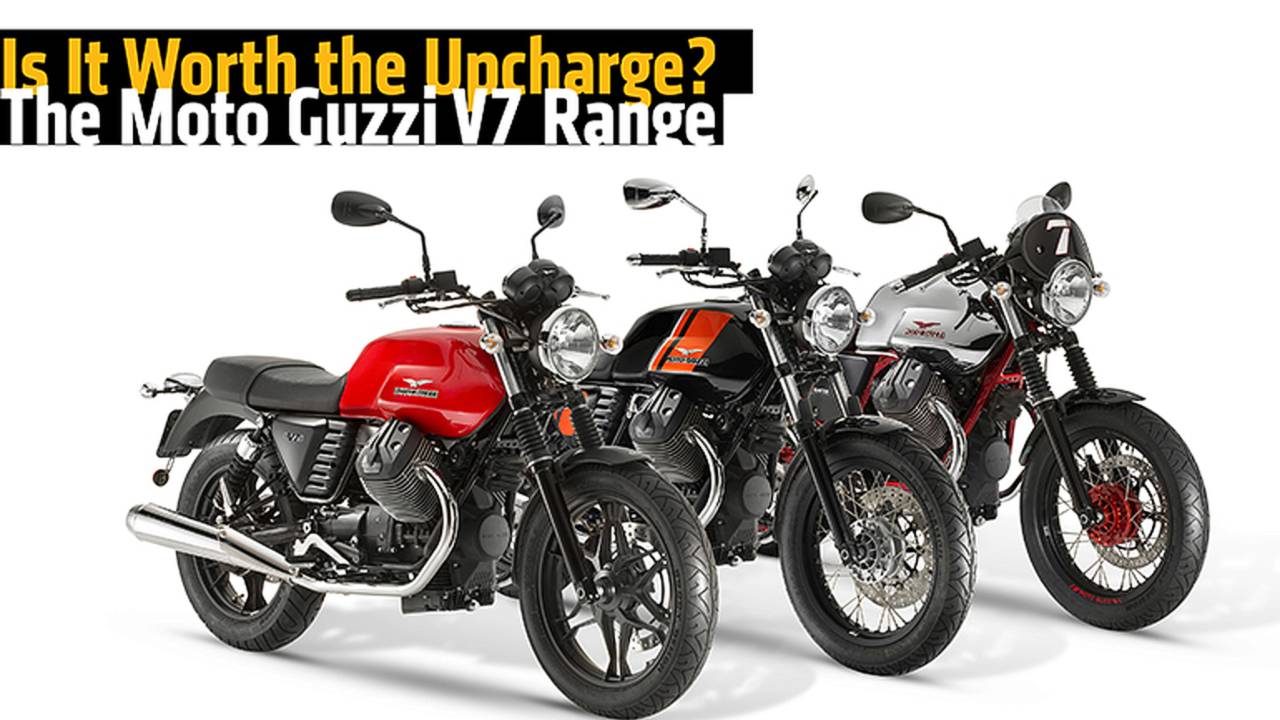 Moto Guzzi offers many models within the V7 Range, at varying prices. Is the V7 Racer worth the up charge compared to the V7 Stone?

Many manufacturers package the same thing in different wrappers. Whether it's the Victory Cross Country sold as the Magnum or the Honda CB300F and the CBR300R, it's all too common to see bikes based off the same drivetrain and often the same suspension and frame sold at very different price points. It begs the question: which bikes are truly worth the upcharge, and which bikes are just ways for manufacturers to have bigger margins?

Differences among Moto Guzzi's V7 models are mainly cosmetic. The $8,490 Stone is the most basic of the lineup. It is offered in a solid color paint job only. Our tester was the basic black; the other two choices include matte white, and a glossy red. $9,290 buys you the V7 Special, a package that includes spoke wheels and a cool, retro-looking striped paint job. Otherwise, the Special is identical to the Stone. The V7 Racer costs $10,490 and gets you the stunning red powdercoated frame, chrome gas tank, a suede leather seat, clubman handlebars (translation: clip-ons), and rear-mounted foot pegs. In addition, the package includes a pair of adjustable Bitubo shocks for the rear suspension.

After having the opportunity to spend a lot of time riding both models, I personally prefer the V7 Stone. Its more upright riding position felt immediately comfortable and intuitive to me from the second I got on it - mainly because of the Stone’s taller handlebars. Affording more leverage than the Racer’s clip-on bars means the Stone turns in to corners easier. With the Racer, I always needed a mile or two to re-learn the inputs needed to negotiate a turn before feeling comfortable on it. Admittedly, my background riding various Japanese cruisers and standards is most likely responsible for this. The V7 Stone felt like an old friend; I was simply more comfortable on it in every situation.

The only other criticism I’d levy against the Racer is that its riding position forced me to work the clutch lever in a way that made my wrist ache after about 30 minutes of riding. Though I suspect this is something your body would adjust to over time as you build strength in your wrist, I believe the V7 Racer is better suited for shorter trips or blasts on your favorite canyon road. In contrast, I went on several three-hour rides on the Stone with zero pain or discomfort anywhere on my body.

Still, the question remains: is the V7 Racer worth the $2000 jump in price over the V7 Stone? The answer is yes. The Racer and Stone are aimed at different audiences who probably would not be cross-shopping both bikes. If a naked sport bike is on your shopping list, the V7 Racer is an excellent choice. It’s capable, quirky, and unique in a sea of faired sport bikes. It’s as gorgeous to look at as it is engaging to ride. Where the V7 Stone goes virtually unnoticed in traffic, the V7 Racer drew thumbs-up and admiring stares everywhere it went. Hell, I also stopped to gawk at it every time I approached it.

The one caveat to consider is that it’s possible to build your own V7 Racer with a used bike and a combination of factory and aftermarket parts. The tank guard, Alcantara seat, bikini fairing, side covers, and adjustable shocks are all available from Moto Guzzi. You’ll have to come up with a chrome treatment for the gas tank, but there are several coating companies that can make that happen for you. Mix and match from various aftermarket vendors, and you could build a similar-looking bike for even less. So the crafty, hands-on owner may want to build his own, save some cash, and have an even more unique bike.

Overall, the V7 Stone is my choice, and the one I’d buy no matter what. It has the right combination of performance, looks, and comfort to make it an excellent all-around bike. It’s a comfortable commuter, entertaining performer, and I prefer the understated and classy blacked-out look (not to mention the easier-to-clean six-spoke alloy wheels). Factor in that it’s the least expensive of the V7 range, and it’s the easy winner of this comparison.