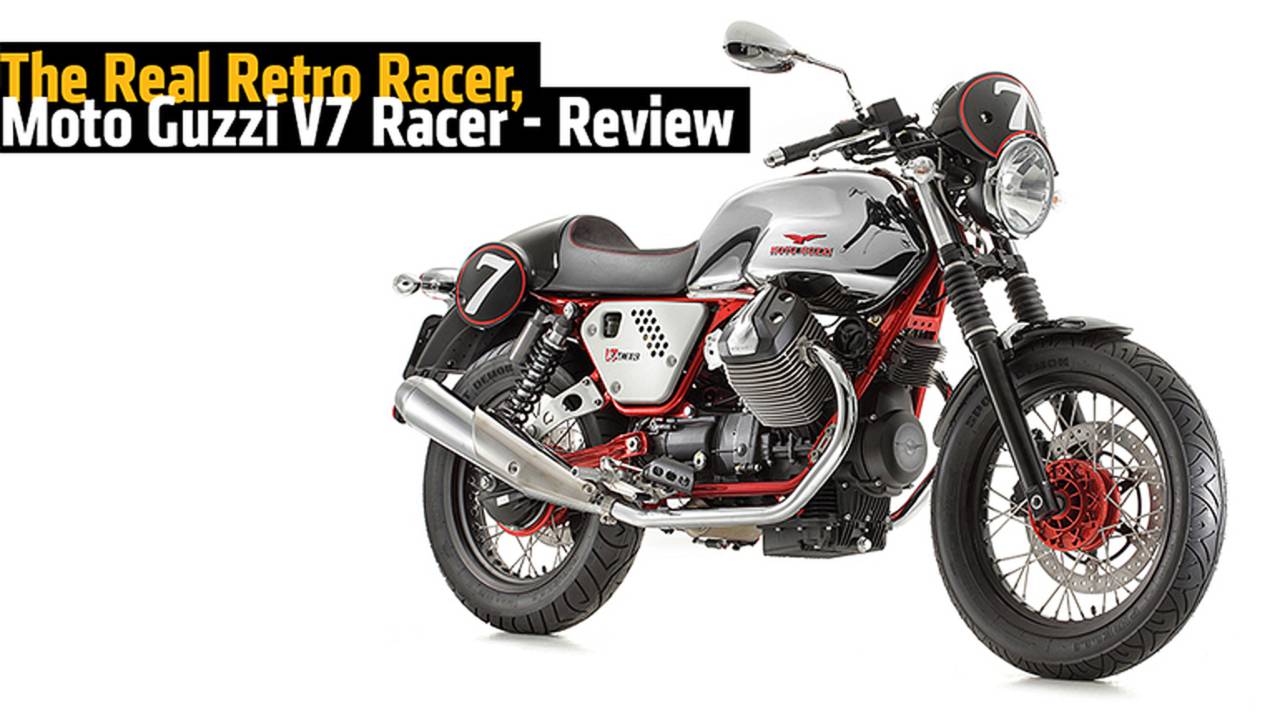 The Moto Guzzi V7 Racer brings the best of both worlds: old-school looks with modern reliability.

From the outside it would seem Moto Guzzi built the V7 (V700) back in the late '60s and then said, “yeah, that’s good enough,” with only a sliver of updates every year. The 2014 Moto Guzzi V7 Racer is not a retro throwback, but rather a real vintage bike with the feel and functionality of a bike of yesteryear. Luckily though, it retains all the fun too--with none of the headaches of owning a classic bike.

Reliable, fast, easy to work on, simple and cheaper than a restoration, the V7 Racer has all the good with little bad. It's easy to ride with a nimble feel and soft clutch, it'll zap you back to a time of hill climbs and road rallies, even when you're just commuting to work.

The Moto Guzzi V7 Racer has that throwback appearance, and V7 riders should expect to find themselves fielding a ton of questions about it from fellow riders and non-riders alike.It has all the feeling and look of a traditional bike, from the foot pegs, sloppy shifter, noisy engine (and I don’t mean exhaust note) and rough suspension, and we loved every minute on the seat.

Then there’s the looks: the chrome tank, racer emblems, rear sets and bright red frame. Everyone loves a vintage bike, and wants to tell you their life story when you stop for a pack of Skittles.

And while the V7 Racer had the feeling of a vintage bike, it doesn't have any of the headaches. The bike has more than enough top end power to ride the highway for days, and it has enough low end to make it fun. It’s reliable, you can split lanes like a champ and it handles in a way that will make you a better rider. It's simple, reducing riding to the bare basics just like an old school bike, and it’s reliable (yeah, I know we said it twice, but it bears repeating).

We’ve had this bike for a couple months now and shared it amongst myself and newcomer John McGann. (This piece was co-written between the two of us and John is currently on the V7 Stone, which is a base model to the V7 Racer. If you want to know the differences read John’s story,  published tomorrow).

When I first rode the bike with my prejudices in mind, I rode up through the gears and said to myself, “yep, there it is, that vibration I expected.” I was doing over 90mph...

We rode mostly around town and highways with the occasional twisty sections. I commuted to work on this bike for a few weeks, along with the Distinguished Gentlemen's Ride. It was a blast to pitch around town and always a topic of conversation.

The suspension and overall look has slightly changed since the bike's 1971 inception, but the 90-degree sideways mounted V-twin small-block has been the basis of the V7 since the start.

Moto Guzzi recently re-engineered the 744 cc air-cooled v-twin and it's wonderful, with some of the feel of the original, but with a little more power and a better torque curve .

Moto Guzzi says this engine is 70 percent new, but that's hard to believe. It still retains all the original feel of the small-block Moto Guzzi. Last year the 744 cc lost its dual-throttle body set-up for a single throttle body, while still slightly increasing power.

Peak horsepower occurs at 6,250 rpm, so around-town acceleration is effortless, yet there’s still ample power when the revs climb to highway speeds. At idle, engine shake is more like a back and forth wiggle, causing the mirrors and fender to quiver in a way that’s refreshing, rather than annoying, while at speed, vibration is virtually nonexistent.

The five-speed’s ratios are well spaced, so you never feel as though you’re in between gears at a given road speed.

At a svelte 394 pounds, the bikes carry that weight in a compact manner that never felt unwieldy. It’s slightly top heavy, but a controllable top-heavy. It felt like it always wanted to fall right into a leaned bank for a sharp corner. Ultimately very nimble and balanced.

It’s very easy to ride, but if you want to go fast you have to put in work. The bike makes you a better rider, not necessarily faster than your buddies, but it'll make you more disciplined than them. You have a direct line of communication with the road, the V7 constantly gives you needed rider feedback.

The straightness of the chassis always kept it in a perfectly straight and narrow line despite having the skinny front end.

The 40mm forks are definitely lacking in today’s standards, but the rear shocks, an upgrade for the V7 Racer, are a definite improvement. Just the right combination of travel and stiffness for both John and myself, even though John is lighter than I am.

It occasionally left me with a void of confidence in a tight corner, leaving me with less room if I needed to change direction mid-corner. But that all plays to the traditional feel of the bike. Racing through the canyons you were instantly zapped back to a vintage hill climb event.

Shift effort is light, but sloppy, our particular bike had been "media-clutched” as it was worn out and obviously been thrashed on. An indication of the bike’s reliability was that the terrible clutch was rarely ever a problem, occasionally leaving us to search for neutral at a red light. The drive train is so proven it felt like a tank, never doing anything phenomenally well, but always working no matter the conditions.

Braking duties are easily handled by a single 320-mm floating front rotor and a 260-mm rotor out back. Both are gripped by Brembo calipers; the front is a four-pot design, and the rear is a floating, two-pot version. The pads offer great initial bite, cold or hot, and braking action is smooth and progressive. The peddle feel is very squishy and the transfer from the braking force to your input is rough, but the bike does stop well.

The seating position definitely makes up for the lack of suspension prowess. The bike felt like it was below me the entire time, making it easy to shift my body weight and quickly maneuver past a car mirror.

The clip-ons feel intimidating, but for me, it never left me feeling tired or with worn out wrists like a sportbike. It does become cramped with boots or a book bag on, but only a slight inconvenience. It was surprisingly comfortable and well mannered in city riding.

The V7 Racer Record includes this fixed fairing and retails for $1,990 more than the Racer.

It has the most advanced technology...for 1955. The only major updates the V7 has received in recent history is the single throttle body, which according to Moto Guzzi cuts down on fuel consumption while lowering the torque curve and increasing hp-output.

Like many before have said, it’s an adventure every time you ride the bike, but more importantly for us it was surprisingly practical. I’ve said it before - practicality is key, unless you’re a late-night talk show host with a separate bike for every occasion. If you’re dishing out the dough for this bike you want it to do many things well and the Moto Guzzi V7 did a lot of things great: lane sharing, acceleration, gas mileage, canyon carving and good looks.

At $10,490 it’s been said to be expensive for the market, but only slightly. There is stiff competition from the likes of Triumph Thruxton which retails for $9,499, and makes more power with slightly better brakes. The guy buying the Moto Guzzi however isn’t doing it for the sheer price to performance ratio. It brings a un-replicable smile to your face every time you throw your leg over it. Once you ride it, there's no explanation needed as to really why.