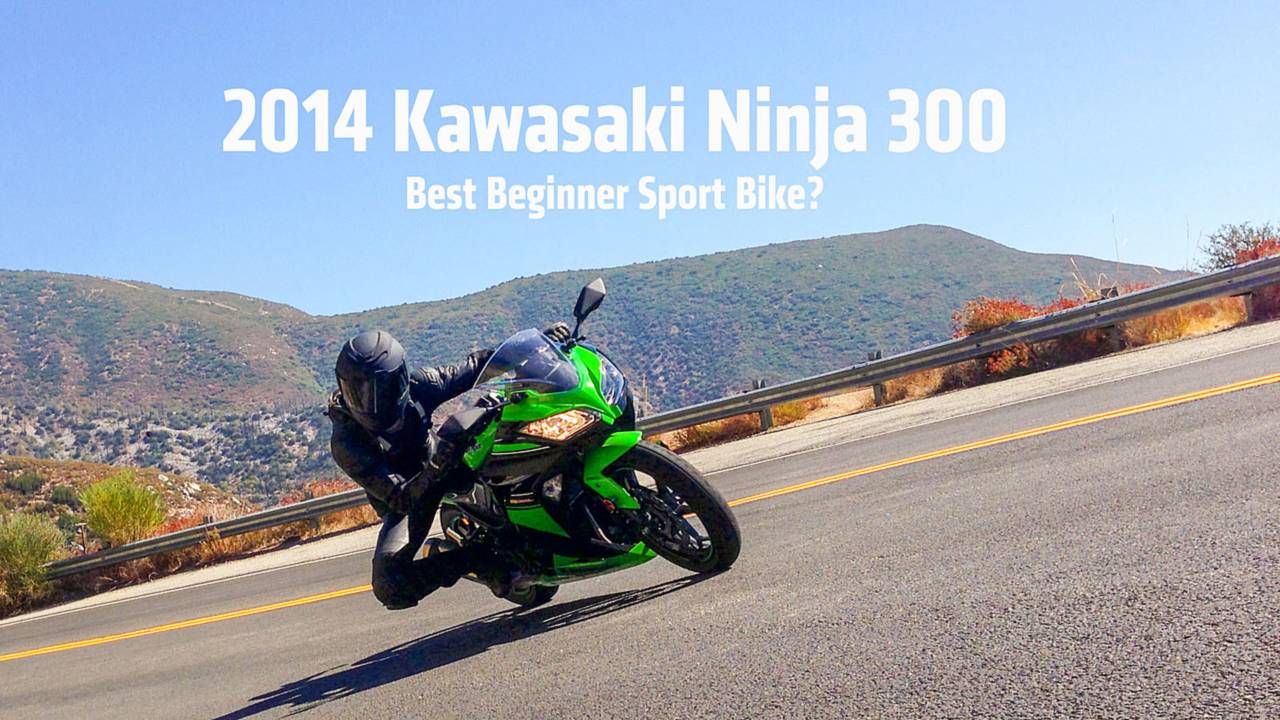 In this 2014 Kawasaki Ninja 300 ABS SE review, you'll find out if it really is the ultimate first sport bike.

“The Ninja 300 will smoke a CB500F and out-handle it as well,” wrote commenter Darin last week. The 2014 Kawasaki Ninja 300 has gained quite the reputation as a pocket sport bike recently. Small, light and fast? Sounds good to us, let’s find out if it’s true.

Buyers Guide: Research Ninja 300 pricing, insurance, specs and to compare it to any other bike available today.

In 2013, Kawasaki comprehensively overhauled its mature Ninja 250 platform. The most significant upgrade in its 27-year lifespan saw the steel tube frame revised for increased rigidity (up 150 percent), the addition of a wider, 140-section rear tire, a slipper clutch and optional antilock brakes.

Visually, the old bike's humble looks give way to aggressive new creases intended to replicate the lines of the current ZX-6R and ZX-10R.

The 2014 Kawasaki Ninja 300 ABS SE tested here is the most expensive version, bringing antilock brakes and a set of graphic stickers applied on top of the green paint for a $500 premium of the base, non-ABS Ninja.

I used the littlest Ninja to scoot around Los Angeles for a week, making a couple hour-long freeway trips to Orange County as well. In town, its diminutive proportions and responsive nature see it busting traffic with ease. Small bikes like this one make easy work of tiny gaps between cars that even 600cc super sport bikes struggle with.

I’ve heard frequent complaints about the non-ABS Ninja 300’s weak front brake and contributing RideApart writer Kate Erwin even complained of that on the bike she reviewed a couple weeks back. But, on this ABS model, feel and power are both there, joined of course by the confidence and safety of ABS. It’s a light bike, so it doesn’t take much to bring it to a commanding halt.

Steering is fast, if not razor sharp and the relatively upright riding position takes the weight off your wrists. Together, those upright ergonomics, confidence inspiring brakes, lightweight and quick steering make it a great little city bike.

The motor isn’t quite torquey enough to keep up with larger motorcycles away from a stoplight, but so long as you work the motor hard, it will stay in front of four-wheeled traffic.

Things are less happy on the highway, where the Ninja remains stable and the performance adequate, but the engine's limited capacity becomes apparent in the high revs its sustains at freeway speeds. 80 mph equals 9,000 rpm and Kawasaki’s parallel-twin is uncharacteristically vibey and harsh. Those vibrations carry through to your hands and feet, making them go numb after 20-30 minutes of steady cruising. That’s enough time to unveil the Ninja’s other serious comfort problem — its plank-like seat. With numb hands, feet and posterior, my maximum cruise time without pulling over for a walk-it-off was capped at 45 minutes. Frustrating when trying to reach a destination that was 60 minutes away.

A problem both in town and on the highway, the suspension feels to be sprung relatively stiffly, but with poor damping control. The two factors combining to make for a harsh, bouncy ride. On the highway, joints between the concrete slabs were a literal pain in the rear end while, in town, great care has to be taken to avoid pot holes and such for fear of being bounced off-line.

Those comfort compromises and the predilection for smooth surfaces limit the Ninja’s outright suitability as a commuter or all-rounder and point to a more sporting focus. So, earlier this week, I donned my leather onesie and took off for my favorite road, prepared to have some fun riding a slow bike fast.

Entirely due to my 34-inch inseam, dragging knee on a motorcycle is a routine, weekly occurrence for me. I don’t try to make it happen, my ape-like limbs just mean its an inevitability if I’m leaning past 35 degrees in a corner. On this particular road — 39 from Azusa to Crystal Lake — my pucks tend to touch down in nearly every major corner. And they do that on a variety of bikes, from a Honda CBR1000RR to a Ducati Multistrada 1200 to an Aprilia Tuono V4R or even on a Moto Guzzi Griso. I say this not to brag, but simply to provide context for the photo you’re about to see.

Here you go, this is the most impressive photo we came away with. I’m what, 20 degrees over, at most?

And that’s because, in stock form, the Ninja 300 simply doesn’t provide the communication, confidence or performance you need for traditional sport riding.

Why is that? It’s not the small engine. Despite its vibes, it delivers reasonable performance even beyond legal highway speeds. It’s not the new frame, which is much stronger than before, eliminating flex. It’s not the new slipper clutch, which actually helps you ride faster by making it safer to downshift harder and later. It’s not even the stiff, under-damped suspension. The main problem here is the tires.

The IRC Road Winners, as also fitted to the Honda CBR250R, are ancient bias ply items (the radial motorcycle tire was introduced one year after the Ninja 250) that limit the Ninja’s performance. Any time you start applying cornering force to them, they squirm around, destroying feedback; their outright grip is limited and they just don’t inspire any confidence. I’m a fairly experienced rider, I can only imagine these limitations are exaggerated in the hands of a beginner.

Additionally, the inability to achieve high degrees of lean ultimately limits the Ninja 300’s cornering speed and the amount of fun you can have with it on a good road like this one. If it’s to be a sport bike, it needs to corner. With these tires, the Ninja 300 doesn’t do that.

Pirelli now offers its excellent Diablo Rosso II radial tire in sizes that will fit the Ninja 300. The upgrade will cost you $240, but will also totally transform this motorcycle.

The Ninja 300 feels much lighter than its 384 lbs curb weight would suggest, aiding confidence in new riders and outright enjoyment in experienced ones.

The 30.9 inch seat height is a good compromise between accessibility for short riders and comfort for tall ones. Despite its sport bike looks, even my long legs aren’t very cramped.

The aggressive looks bring the Ninja 300 up to date.

The optional ABS brakes are strong, delivering both good feel and complete confidence. Crucial points for a new rider.

Performance is strong enough to keep you ahead of traffic in town and it can keep up on the highway too. We had no problems staying in the fast lane.

The fairly high bars and not-too-high pegs deliver ergonomics that facilitate both sport riding and comfort. Even tall riders can achieve good body position, something that doesn’t always apply even to liter bikes.

The analog tachometer/digital speedometer clocks are clear, immediate and comprehensive and include a fuel gauge.

At 68 mpg, the Ninja 300’s fuel economy is excellent. Running it will cost you pennies.

Fueling is smooth and predictable, a nice surprise in the switch from the 250’s carbs to the 300’s fuel-injection.

A hinged fuel cap? Thank you, Kawasaki for not scrimping here.

Despite its impressive performance, the engine’s power delivery feels flat and the engine is harsh and vibey. This is the one area — aside from the tires — where you feel the bike’s age.

The suspension is relatively stiffly sprung, but under damped. This leads to a harsh, bouncy ride, particularly on the freeway. Potholes can upset the chassis and direct you off course.

Otherwise ideal ergonomics are spoiled by a hard, unsupportive seat and the significant engine vibrations that carry through to bars and pegs unchecked. This limits the Ninja’s outright usability over distances exceeding 40 or 50 miles.

More mature, city-based riders may find the Ninja’s in-your-face styling to be too aggressive.

Stock tires — IRC Road Winner bias plys — aren’t up to the Ninja’s performance, and are artificially limiting its true potential.

“Find the right environment and the Ninja will offer nonstop thrills.” — Motorcyclist

“We encountered some rather rough stretches of road on our ride, and I’m happy to report that the suspension proved up to the task.” — CycleWorld

“…the new bike is noticeably smoother than its predecessor thanks to rubber engine mounts keeping vibes at bay.” — Motorcycle.com

The considerably slower Honda CBR250R would make an equally good beginner bike and is now considerably cheaper at $4,199 without ABS or costs $4,699 with.

The real trouble for the Ninja arrives in the form of the 2013 Honda CB500F, which equals the $5,499 SE's price. The Honda is equally accessible to the Ninja, but offers considerably more versatility from its larger, more relaxed motor and superior comfort (day-long trips on the highway are a cinch). The CB’s ride quality is higher thanks to plusher suspension and its handling and outright sporting ability are also better thanks to the standard fitment of radial tires. Knee down no problem.

The 2014 Kawasaki Ninja 300 brings the styling of its big brothers to a small, affordable, beginner-friendly package that’s engaging and sporty. Features like the standard slipper clutch and optional ABS boost that capability, while adding safety and peace of mind.

Fast enough to keep up in town, on the highway or to tackle a mountain road, the Ninja provides more performance than its capacity would suggest.

Unfortunately, its practicality is limited by compromised comfort and reduced ride quality, while its sporting ability is limited by outdated stock tires. With the price increase for 2014, other motorcycles now match its MSRP while offering more comfort, more speed, more versatility and equal ease of use.