Grab the Bull by the Horns: Riding the 2017 Aprilia Tuono 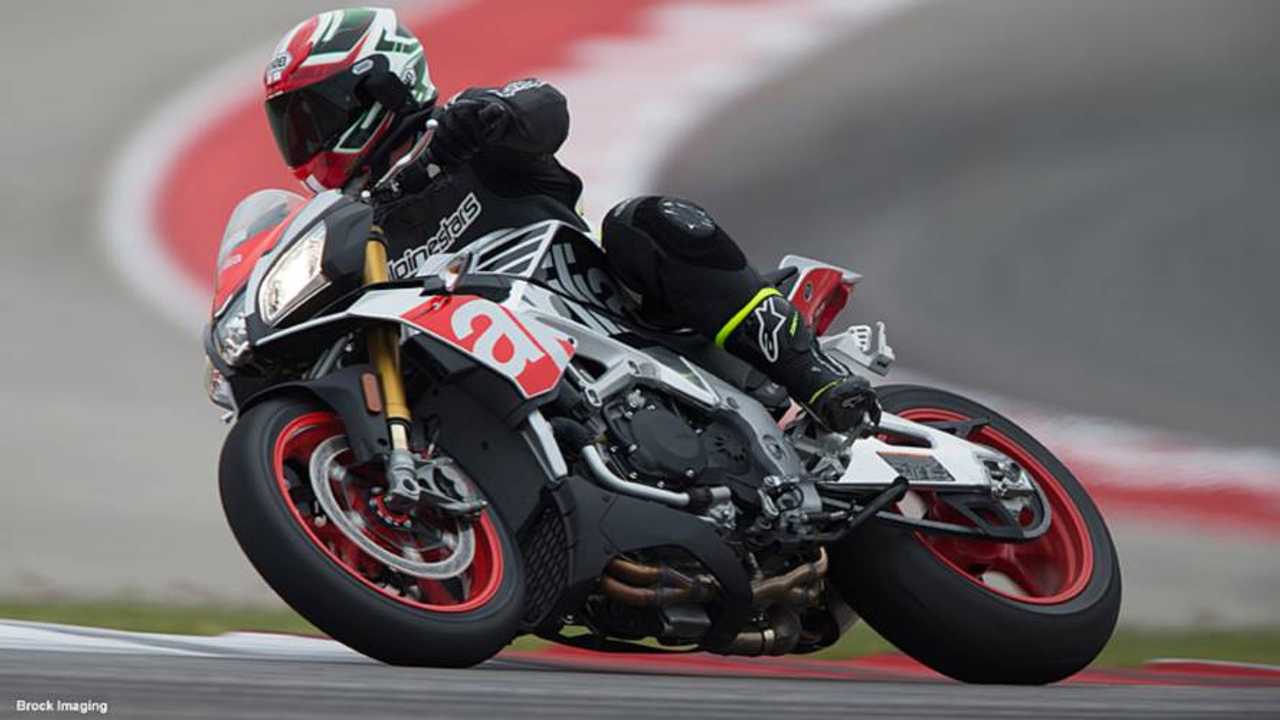 Aprilia knocks it out of the park yet again.

The analogy of grabbing the bull by the horns was running around in my mind as the laps piled up during my first few sessions riding the Tuono Factory 1100 around the 3.4 mile long and 20-curve filled Circuit of The Americas race track. Here I was on board a 200-horsepower beast that is basically a superbike with a pair of tall bars bolted onto the triple clamp that gives it that bullish look but makes it considerably more comfortable and easy to ride than its track bred counterparts known as the RSV4. I wouldn’t want to be anywhere else.

This was a day that allows me to check off a box from my bucket list. I’m riding COTA for the first time on a bike I know well. What more could a guy want? The Tuono riding position is so much less aggressive than the RSV4 and as a result you can be a bit more relaxed while still attacking the turns. As I get older and less flexible this position plays to my strengths both mentally and physically. I no longer look forward to being bent in half and feeling compelled to play the part of a superbike racer at full tuck and I like the dirt bike style riding position much more. I prefer to be hung out in the wind, experiencing the tornado like blast of air trying to peel me off the bike as I breach the 160 mph mark on an un-faired Italian crotch rocket. That is hella fun and it is part of the allure of the naked bikes. Like I said, I already like the Tuono and Aprilia just made it even better.

For 2017 the Tuono models receive some universal upgrades across the entire V4 range that make a fine running machine just a little bit better. A new TFT dashboard integrates all of the latest generation of Aprilia go-fast gadgetry with the basic dashboard functions along and pairs it via Bluetooth to whatever device you want. There’s Cornering ABS, Rear Lift Mitigation, Pit Limiter, Launch Control, Wheelie Control and Traction Control plus the engine modes for Race, Track and Street.

Brakes are beefed up too. New M50 radial mount four-piston Brembo calipers are paired up with larger 330mm rotors for an even better braking experience. ABS comes standard on both models. As with most European bikes these days, the Tuono is now fitted with a new Euro-4 compliant exhaust too. It adds a bit of weight to an already heavy bike but it still emits the most melodic roar when you have the bike raging at full stick. I’ll take that type of compliance any day.

For track riders the new quick shifter with up and downshift function is the bees-knees. The QS is so good you don’t even need to let off the gas, pull in the clutch or anything that you normally do in the course of down shifting or upshifting. The QS does it for you and it greatly reduces the effect of arm pump in particular. And last but not least, the street rider’s best friend is now standard equipment on the Tuono as well: cruise control. Which should make droning highway rides less painful even if it isn’t very useful on the track.

I’m going to talk about both versions of the Tuono in this review because they are so close in performance and only $2500 difference in price. The Tuono 1100 Factory will set you back $17,499 and the Tuono 1100 RR is $14,999. Both bikes are awesome on the track and will surely be equally sweet on the street but I only spent time on the closed course during this intro, so I will try to focus on that. Out there with our knees dragging and tongues wagging it was difficult to tell the difference between the two.

I kept thinking to myself that in a blind taste test it would be difficult to tell these bikes apart. On paper the differences are minimal and at speed they seem even more similar. The Factory comes with Ohlins fork and shock while the RR gets Sachs suspension components. You get a more colorful tri-color livery and solo seat and Pirelli Supercorsa tires on the Factory, while the RR comes in red and black with a two-up seat and Pirelli Diablo Rosso III tires. Beyond that the pair share the exact same engine, electronics package and Brembo brakes. On the track the tires are probably more of a limiting factor than the suspension but a discerning rider will be able to pick up on the subtle differences between the two.

Running With the Bulls

At the pace we were riding, I’d say the RR was plenty of motorcycle for me. I actually get along fine with the Rosso III tires and think they offer one of the best combinations of durability and grip of any tire you can buy. There were more than a few times when another rider on an RR was ahead of me and regardless of which bike I was on, I couldn’t push hard enough to get by them. And that’s more a testament to the tires and the bikes than a knock on our riding skills.

Both bikes have the same 1077cc V4 engine and nearly 90 lb.-ft. of torque so when you’re connecting corners, you are hauling serious ass. Never once did I think I wanted more power than what was at my control. Most of the time I was thinking how crazy it is that anyone can just go buy this bike and hit the streets with it. This is a wolf in sheep’s clothing so if and when you get one of your own, use some good judgment when riding this motorcycle. It’s a beast.

While the Sachs suspension is often overlooked when you see it side by side with the Ohlins parts on the tech specs, these are not low grade hardware. This is suspension that is well suited for track days, overkill for the street and arguably better than what most superbikes were equipped with in the past decade or two. It’s just less expensive than the trick Ohlins units bolted to the Factory. There’s no dramatic diving from the Sachs fork when you get on the brakes and the bike never wallowed or bucked because the settings were wonky. Instead, it tracked true around the turns, soaked up bumps just fine and never left me longing for the Factory for any reason other than I wanted to be on the up-spec bike because I’m spoiled.

Looking back at my notes, when I was finished riding the Factory with its Ohlins units, I wrote that the bike felt a bit easier to toss from side to side and that the bumpy sections of the track didn’t seem so, bumpy. I also felt like I was able to push the front end a little harder, maybe trail brake a little deeper than I did on the RR but it probably had a bit to do with the stickier tires as well.

Riding the bikes back-to-back I definitely felt faster on the Factory but we weren’t taking lap times so I can’t say definitively that I was faster. It may have been a placebo effect because I knew I had the up-spec suspension and tires at my disposal but I felt great on both versions.

While I like the Rosso rubber I really love the Supercrosa tires. Again, the tires and suspension are not what keeps the speeds down, it is my natural instinct for self-preservation. I know I can go faster but do I need to? Not really. I always ride about the same pace, give or take 10-15 mph depending on my level of comfort. I never felt like I was pushing the Tuono near its limits but I always felt like I was having a really enjoyable ride and I was going as fast, or faster, than I wanted to. And that is the crux of this rodeo ride.

The reason I ride motorcycles is because it is kick-ass fun. If it isn’t fun then what is the point, right? Well, when you ride a bike like the Tuono you combine the pinnacle of sportbike performance with a comfortable upright riding position that still allows you to hustle around a track, drag a knee and go full blown hooligan if you’re predisposed to ride that way. The Tuono series of bikes do it all.

Honestly, there was not anything I could really bitch about on this bike. It offers up more performance from a motorcycle than most of us will ever need, it’s fast, looks bad ass and that leaves the price and plethora of rider-assist functions to sort through as about the only complaints. Honestly, I left the TC on setting two and the map on Track with wheelie control on max. I didn’t pay enough attention to be able to figure out how to take the WC off while on the fly and every time I practiced doing it in the garage it was so simple.

So, whatever. I’m an idiot. But besides eliminating any style points form my photos, the WC just keeps you tracking straight and true no matter how good of a drive you get off the turns. And it didn’t matter which version I was on, I always had a smile on my face under that dark Shoei visor. So, if you have the cash to pony up for the Factory then do it. If you only have enough for the RR you can rest assured that you’re getting a hell of a deal so don’t sweat the measly $15K.

Pretty much everything about this bike appeals to me. It has a big bore V4 engine that has consistently churned out 175 horsepower at the rear wheel in every test the past two years. Add into the mix the latest generation of the Aprilia bike management system, TFT dash, quick-shifter and M50 brakes and somehow it gets even better than it was last year. The RR only gained $200 to the base MSRP over 2016 for the added goodies. I love this motorcycle and you will too.

Would I buy it?

If I had the cash, you bet. I really like the RSV4 RF and it is hard to admit that I am no longer comfortable on a full blown superbike. But these street fighter designs will keep me on the road and track for at least another decade or two. When I cash in my 401K and finish paying child support... oh and I need to get my next three kids into college too. But after that I’m going to buy a Tuono. Of course, I will be 60 years old and likely living out of my RV by then but I’m still going to kick some ass in B-group during my favorite track day!

Conclusion - I Want One!

All joking aside, we need to applaud Aprilia for its effort in bringing the pure, unadulterated versions of the Tuono to us. In this era of tuned for torque, watered down street fighters the Tuono is like the proverbial bull in the china shop. It rumbles through the aisles, knocking down misconceptions and stomping on the street fighter standards with its monster motor, wide bars and half-naked bodywork announcing that daddy is home and he wants to have a good time. If you are looking for a new motorcycle that is equal parts track day weapon and canyon carving scalpel then you need to look no further than the 2017 Tuono 1100. Whether you go with the high priced Factory or the less expensive RR you are going to get an excellent bike. And that’s no bull.