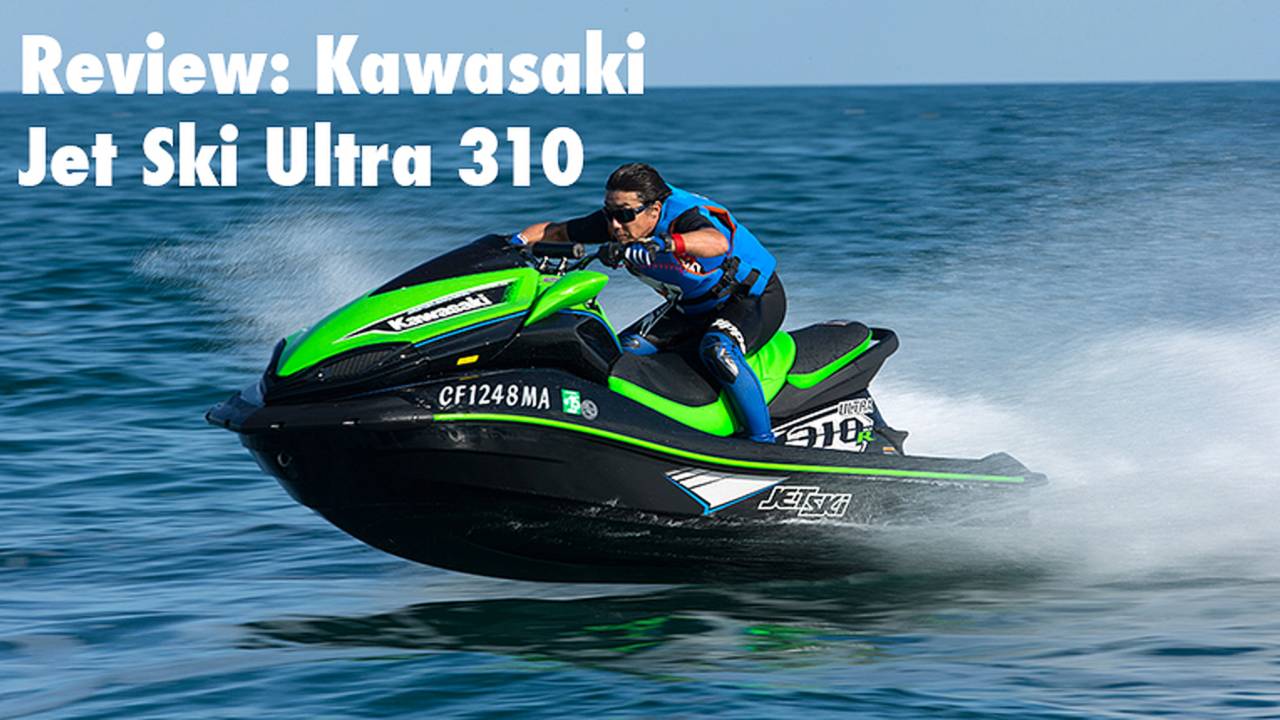 We dive into the new 2014 Kawasaki Jet Ski Ultra 310 and split plenty of water molecules in the process.

If it’s got an engine in it, I’m interested. If it’s got a ridiculous amount of horsepower, I’m more than interested – I’m riveted. When I heard that Kawasaki’s latest Jet Skis, the Ultra 310LX and Ultra 310R, could pump out over 300 hp, I knew I had to catch a ride – even though I’d never ridden a jet ski or other similar watercraft before in my life.

Kawasaki has been building jet skis since 1973, and they’re the leader in the water. Jet Ski is a brand name, but it has been so successful that the name “Jet Ski” has become the defining term for the whole class of waterjet-propelled personal watercraft, much as “Kleenex” has been adopted for facial tissue and “Google” for doing a web search. Several other manufacturers build their own personal watercraft, including Sea-Doo, Honda, Yamaha and Polaris – only Kawasaki builds the Jet Ski.

Kawasaki’s reputation as a motorcycle manufacturer rests in great part on its intense commitment to racing, and the same is true of its personal watercraft. The past three years have brought numerous championships to the banner. Knowledge and experience gained from competition has been exerted on the new Jet Skis, and it shows.

There’s also a lot of engineering crossover from the motorcycle side of the business to the jet ski side. Specifically, the Ultra 310’s engine is based in large part on the Kawasaki ZX-14 sportbike engine, one of the most potent powerplants on the market. The engine is a liquid-cooled inline four-cylinder design that displaces 1,498 cc. Sportbike demands are very different from watercraft demands, however, so the engine gets a substantially different treatment for the jet ski implementation.

The biggest difference right off the bat is that the Ultra 310’s engine is supercharged, while the ZX-14’s is naturally aspirated (no supercharger or turbocharger applied). A supercharger is a mechanically driven pump that increases the air pressure in an engine’s combustion chamber, which allows the engine to extract more power from its fuel. It’s similar to a turbocharger in intent, but a turbocharger is driven by exhaust gases, and needs time to spool up before its effect hits. There are advantages and disadvantages with each device. Turbochargers have less of a negative effect on fuel economy; but superchargers don’t suffer from the spooling up time (called “turbo lag”), and deliver their effect almost instantaneously, and in a very linear and predictable fashion. That’s what Kawasaki engineers craved for the Jet Ski – power down low, right away. And they got it, 310 hp worth – more than double the output achieved by the non-supercharged, non-turbo ZX-14 engine.

Even though they share a lot in common, a personal watercraft is not a motorcycle, and the demands of scooting across the water are very different from the basics of riding on solid ground. Water produces much greater drag and resistance than tires rolling along pavement, so hull design becomes very important. Designers have to strike a balance between lowering resistance and maintaining stability in the water.

Also, it should go without saying that jet skis have no brakes and no suspension – it should go without saying, but I’m saying anyway, because I didn’t realize it until it was time to ride. Jet Skis also have no rudder or any means of changing direction other than redirecting the jet flow under the water. So, the Jet Ski only turns when it is under power. Cut the throttle, and the craft drifts in the direction it was going already.

The controls on the Ultra 310 are very straightforward. A trigger throttle is attached to the right handlebar – not a motorcycle-style twist grip, for reasons that became obvious to me later. Also on the right side are controls for the cruise control. Yes, cruise control, which is very handy, especially in “No Wake” zones. One touch of the “SET” button, and the Jet Ski puts along at a steady 5 mph, the accepted speed in most harbors.

The left handlebar houses the start and stop buttons. A kill switch is attached to a tether, which was attached to my wrist and ready to cut the power if I fell off.

I climbed on board the Jet Ski, and I was pleasantly surprised at how stable the platform felt. I didn’t have to expend any energy or attention to keeping it from tipping from side to side or front to back. I inserted the yellow “SLO” key into the ignition and brought the ski to life. I thumbed the start button, and the Jet Ski began to creep forward.

A lever on the left side of the steering column can be positioned from “F” to “R” (“Forward” to “Reverse”), and there’s a way of finding a neutral, but its way to fussy to bother. If you’re going to sit still on a Jet Ski, just shut down the engine.

Pulling away from the dock, it’s important to keep the speed low and to avoid creating a wake that might disturb the boats that are tied up in the harbor. Kawasaki helps make this easy with a “Set” button that causes the Jet Ski to maintain a steady cruise of 5 miles per hour, the usual “No Wake” speed limit.

Once I was out in the open water, it was time to see what the Jet Ski could do. A pull of the throttle initiated a big thrust of acceleration. I could feel the supercharged engine bite down on the water, and the Jet Ski moved forward. For the first ten minutes or so of riding, I was constantly overcorrecting my direction, so the Jet Ski wallowed from side to side. The more I corrected, the worse it got, and I released the throttle in an attempt to get back on course. Without any power, I had no directional control. I’d glide to a stop, then start the whole process over again. I was frustrated – I won’t lie.  I asked for help, and one of the Kawasaki riders told me to stay on the throttle and to trust the Jet Ski to maintain directional stability. I relaxed my death grip on the handlebars, gently pulled in the throttle and let the Jet Ski come up to speed. The Kawasaki rider was right – the Jet Ski smoothed out, went straight and rode over the waves instead of getting bogged down. My frustration went away, and I was able to enjoy the ride. A lot. I played around with the trim control, which points the water jet up or down in increments up to 8 degrees, adjusting the Jet Ski’s stance in the water for a smoother ride. I quickly learned that standing up at the helm makes the ride much more tolerable in rough water, much like standing on the pegs of a dirt bike keeps you from getting beaten up from bouncing on and off the seat. Your legs act as the Jet Ski’s suspension, absorbing shocks that would otherwise travel right up your spine.

After an hour or so of riding, I noticed that my cruising speed had increased to about 44 miles per hour, around the limit of the SLO key. So I decided to try out the full power green key. Getting the engine’s full response under my throttle was incredible. I had to hold on for dear life, so powerful was the thrust from idle. After just a few minutes, I swapped back to the SLO key, which was plenty of power for me on my first ever day on a Jet Ski.

All that power means that the Jet Ski Ultra 310 is capable of a lot more than just racing around all day. It can carry three people with ease. It can be used to tow a water skier or tuber across the surface. With its 59-gallon storage compartment, the Ultra 310 can carry an amazing amount of gear. I could imagine loading up with camping supplies and a tent and using the Jet Ski to explore coastal inlets and rivers.

Kawasaki builds a few variants of the Jet Ski Ultra 310. The base model, the Ultra 310X ($15,299); the Ultra 310X Special Edition ($15,799) with a sport seat and fancy graphics: the Ultra 310R ($16,299), which has motocross-style handlebars, sport seat and its own fancy graphics; and the Ultra 310LX ($17,990), which adds Jetsound, a system that can play MP3 files from a memory stick, or line level sound from an iPod or other music player. A thoughtful level of waterproofing is included, with a gasket-sealed compartment and watertight holders for the equipment – but I’d still be careful about bringing expensive electronics on board.

Jet Ski’s main competitors are the Yamaha WaveRunner FX Cruiser SVHO and Sea-Doo RXT-X aS 260. Honda backed out of the personal watercraft market in 2010, and hasn’t made any noise about returning. There are a few other boutique manufacturers competing as well. The technological gap between the Wave Runner, Sea-Doo and Jet Ski is thin, but Kawasaki is currently running away in the horsepower wars. The Ultra 310 is the most powerful production personal watercraft on the market today. The horsepower bragging rights would mean nothing if the Jet Ski wasn’t also beautifully crafted, thoughtfully designed and enticingly rideable.

I don’t know if Kawasaki has made a personal watercraft rider out of me or not. I am still in love with the relative convenience and usability of a motorcycle, and I can almost convince myself that my motorcycle is a tool, not just a toy. For me, a Jet Ski would be just a toy, and I don’t live close enough to a place to ride that I’d get much use out of it. If you live near the ocean or a navigable river or big body of water, I’d definitely try renting a Jet Ski to see if you like the concept. You’ll know right away if it’s for you or not. If you decide that you want a personal watercraft, and you have to have the biggest, fastest, baddest one of all, the Jet Ski Ultra 310 is it.