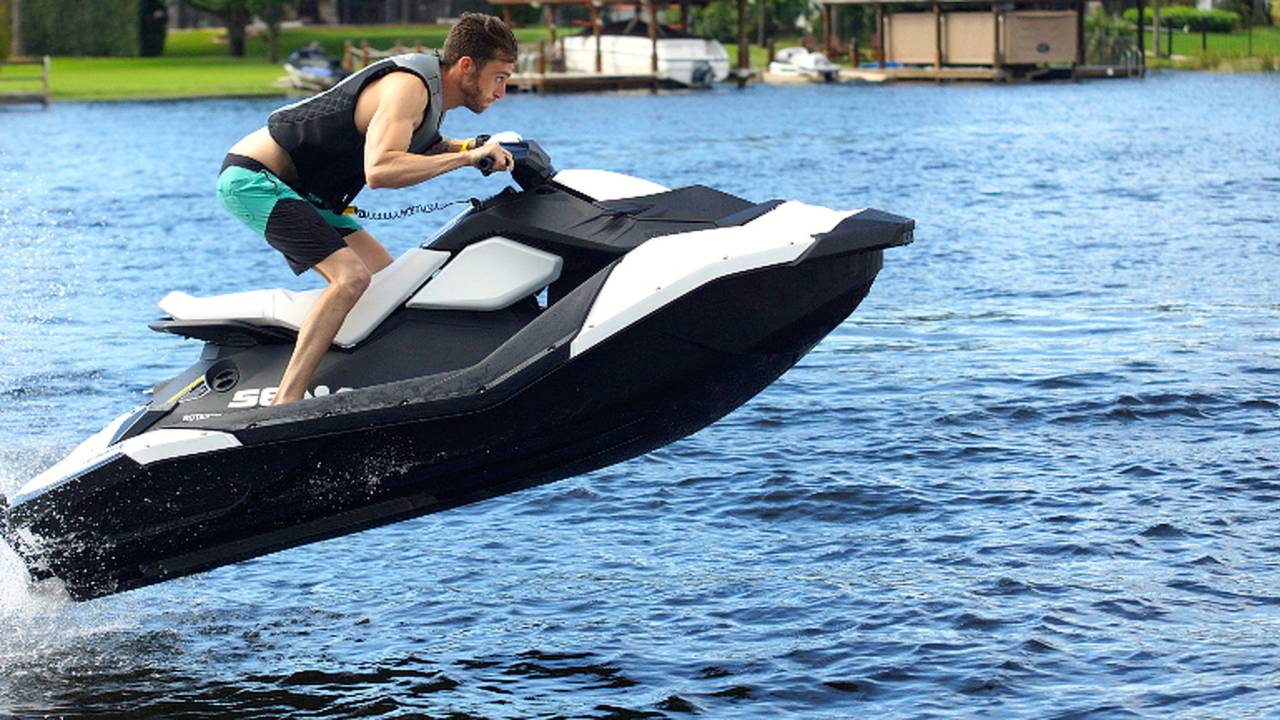 The new 2014 Sea-Doo Spark rides like a Ninja 300 for less than 5K. Read our 2014 Sea Doo Spark review to get pricing, specs and expert impressions.

The Ninja 300 of the personal watercraft world, the all-new 2014 Sea-Doo Spark is lighter, costs less and has a higher power-to-weight ratio than anything else twice the price. I just spent two days in Orlando with a new Spark and while I can't walk today, it's all I've thought about since giving it back.

The team at Sea-Doo, a subsidiary of Bombardier Recreational Products (BRP) and sister brand to Can-Am, spent the better part of eight years creating the 2014 Sea-Doo Spark, and used the Sea-Doo's of the mid 1990's as inspiration. Those were some of the first personal watercrafts (PWC's) to launch the sport into mainstream status. Since then, PWC's have gotten bigger, heavier and more expensive, causing the entire sport to become more of a niche with each passing year.

To combat industry trends, BRP set out to make the lake feel bigger by making the Spark small, fast and financially accessible. They gave it the code name "CAFE" which stood for Clean, Affordable, Fun, and Easy to use. Oh, and that you could get two for the price of one.

That said, the Spark is an all new beast while also incorporating several features from some of its more expensive siblings.

The Spark comes in two different versions, the 2up and 3up. They are essentially the same, but the 3up has a longer seat and an additional section bolted onto the back for additional stability and buoyancy.

The hull and deck are made from a material called Polytec, which is a low-density (lightweight) and high-impact composite material that is also 100% recyclable. They chose this because it was lighter than the typical fiberglass that is used in pretty much every other PWC on the market. It also has the added benefit of a matte finish that is often seen in the automotive space. In real life though, it just looks like plastic.

The structure of the Spark is created by the Exoskel, an all-new aluminum skeleton that keeps the essential parts in the front of the watercraft while maintaining a strong but lightweight frame.

Instead of gluing the hull to the deck, as is customary on other PWCs, they found a way to screw them together while maintaining structural integrity and a proper seal. Why? You can literally unscrew the deck from the hull in about 10 minutes, giving you completely open access to work on any of the internal bits that need attention. I was skeptical, but after watching the demo, I can say they've cracked the code. This will cut down both service time and expense as you no longer have to gain access through tiny service doors as is typical for PWCs.

The engine is the same Rotax 900 ACE engine found in many of the new Ski-Doo models. They offer two versions, the regular Rotax 900 ACE and the Rotax 900 ACE HO (high output) which is chipped to offer more horsepower. As with motorcycles, the Spark uses a fly-by-wire system that, in the HO engine, allows you to electronically choose between a Touring and Sport fueling options.

The Spark also incorporates features found in many of its higher priced siblings. The iBR (intelligent brake and reverse) can stop the watercraft up to 100 ft sooner than others on the market and also makes docking incredibly easy with the reverse function.

The D-Sea-Bel system is basically a giant muffler in the rear of the Spark which greatly reduces any exhaust noise. Walking between the different docking areas, I wouldn't hear the Spark on the water until I was maybe 20 yards away from the beach.

Sea-Doo uses a closed loop cooling system in the Spark, which basically acts as a radiator. This means you don't have to worry about flushing the engine out when you finish riding and are loading the ski.

After the presentation the night before and the morning demonstration about how easily the deck and hull could be separated, I was pretty sure that this part of the review would look the exact same as our review of the Honda CBR250 or Kawasaki Ninja 300. Based on the price and weight spec and all the attention to emissions and noise levels, I was prepared to get on the best entry-level PWC on the market.

Turns out, the more accurate comparison will probably be something like the KTM RC390 or KTM 300 EXC. With such a small and short hull, and with so little weight, the Sea-Doo Spark absolutely flies. I started on the two-up model in Touring mode (60 HP) and was moving faster than I thought this toy-sized PWC would be capable of almost instantly. 40 mph feels incredibly fast on the Spark, in the same way that 85 mph feels fast on the CBR250R.

The Spark doesn't just allow you to take jumps like you would on a dirt bike, it's also really quick around a course. They set up a small hourglass shaped course for us to go around and the Spark was absolutely brilliant to maneuver through it. Riding it is quite similar to riding an ATV; you give it gas till you get to the corner, let off and point the bars in the direction you want to go, then get back on the gas and the rear whips around. Only on the Spark, there's no high siding into a rock or off a track, just a spray of water as the Spark whips in the direction you want it to go.

The intelligent Brake and Reverse System (iBR) is incredible. On the big boys it's noticeable, but on the Spark it really stops the PWC quickly due to its lightness. I was shocked the first time I grabbed the brake lever and the machine stopped within 10-15 ft or so. It's both super fun to use and makes the Spark much safer for those around you should you get a little too rowdy and not see an obstacle or another person in front of you until it would normally be too late.

It had been a while since I had been on one of the big mac-daddy PWCs Sea-Doo is famous for and they were gracious enough to give me a go on the Sea-Doo RXT-X aS 260 which, while an absolute blast and bringing completely different riding skills, just left me wanting to get back on the Spark. To me, Sea-Doo's are more of a toy to play with rather than a vehicle to try and go as fast as possible on. It is easy to assume that Sea-Doo would give up performance and capability by meeting all of the "Clean, Affordable, Fun, and Easy to use" goals they had when creating the Spark, but after riding it I think it's pretty much perfect.

As the youngest journalist at the launch, I had far more energy than the other guys to ride, and ride I did. I rode the Spark until my hands hurt so bad I couldn't ride anymore. When I woke up the next day to legs so sore I could barely walk, I stretched them out and rode again. The biggest complaint about the small displacement motorcycles is that people will grow out of them. While I think that's ridiculous and that there is always more we can learn, I do sometimes wish I had more power when riding on them. While more power is obviously better (I mean if they had a 100 HP version I obviously would have wanted to ride that), the thought never crossed my mind while riding the Spark.

Sea-Doo had a ton of goals when creating the Spark, and I believe they met them all.

They said they wanted to make a PWC that was fun for the whole family and would make the sport accessible again. The Spark is incredibly easy and intuitive to use and would make a great first experience for any kid, especially in Touring mode.

They said they wanted to appeal to new customers. If those of you considering a small track bike or new dirt bike aren't reading this and salivating, I don't know what's wrong with you. It's such a similar experience, only without the sweaty gear and fear of falling.

They said they wanted to be able to sell two for the price of one. With the average PWC cost hovering around $9,500, they hit the target and then some. It's honestly amazing how much product you get for your money with the Spark.

They said they wanted to make it clean, affordable, fun, and easy to use. With incredibly low emissions, and incredibly low MSRP it easily meets the first two.

I'm not sure if I've mentioned this yet, but the ride falls on the "best thing ever" side of fun. With low service intervals combined with the fact you can split it apart for service, and the fact that a few guys can pick one up, the Spark is also incredibly easy to store, transport, launch, and ride.

They said they wanted to make it accessible and easy to own. You can pull two Sparks on a specially made trailer behind a Toyota Yaris because the three pieces combined only weigh a scant 1500 lbs. When they first unveiled the Spark, four kids quite a bit younger than me picked one up and carried it to the shore. To top it off, the Spark will take up a little more space than a motorcycle in a one car garage.

They said they wanted to make it fun. Well, yeah!

Getting the front end out of the water was so easy, I taught a guy from one of the lifestyle magazines.

I can't ride it on the street.

There aren't any good lakes near my house.

I'm being a bit snarky, but I don't think they could have made a better product keeping in mind the price they were trying to hit. Yes, it's still about a $5,000 toy and that is a lot to spend. However, if you are considering a PWC, a Spark demo should be on your list. You can check one out during a local stop on the Sea-Doo demo tour, or you can schedule a test drive with a local dealer.

They haven't released complete pricing for all of the options available, but the 2up Spark with the regular Rotax 900 ACE engine has an MSRP of $4,999. On the other end, we were told that the 3up model with the Rotax 900 ACE HO engine and the intelligent Brake and Reverse System would retail for around $6,300.

For two days, I rode the new 2014 Sea-Doo Spark with only one thing on my mind; I never want to get off. Hands bleeding and blisters forming, my legs trembling like my girlfriend's chihuahua mutt; I always had one more jump, one more spin, or one more minute left in me. I know most of you do not come to our site to read about things other than motorcycle and I'm sure there will be a lot of complaints as we expand into other areas of the powersports industry, but please hear me out when I say that if you like motorcycling, you will absolutely love the Spark.

Would you ever take a crack at a Spark on the water?