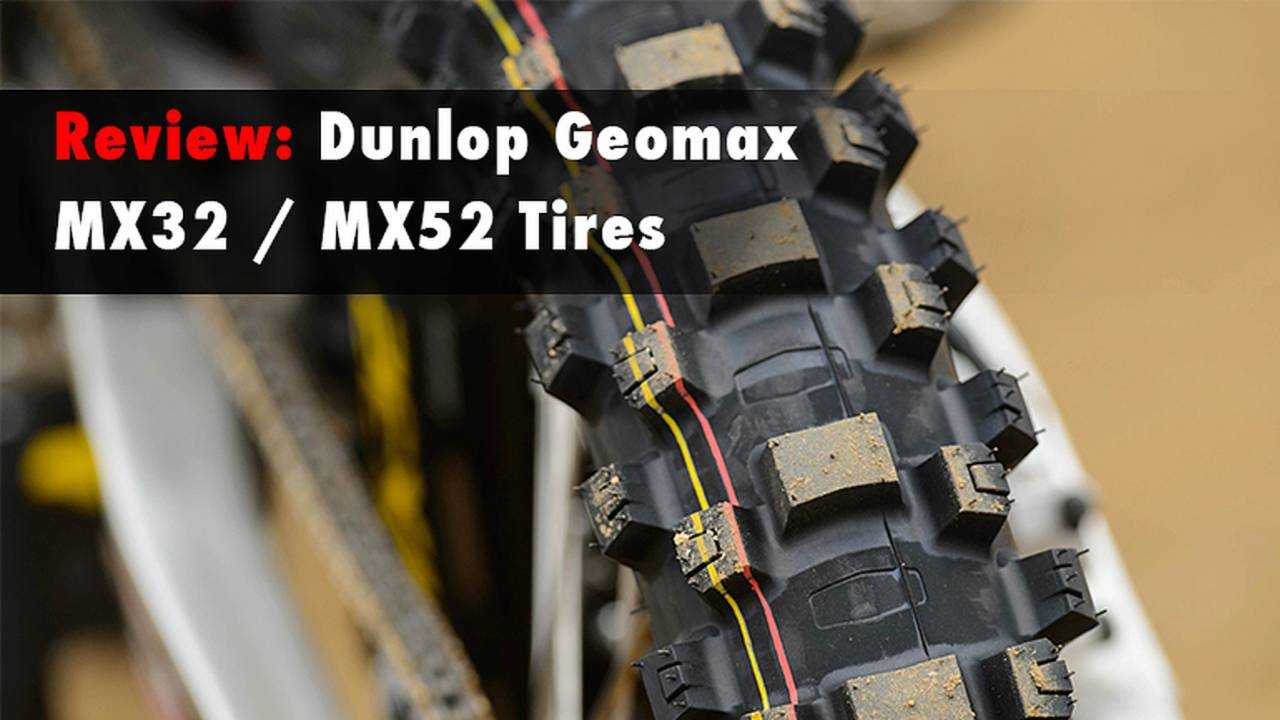 We experienced the launch of the Dunlop Geomax MX32 and MX52 motocross tire. From the track to consumers will their AMA success translate to everyday riders?

We finally had the chance to experience what motocross riders have been enjoying for the past year or so with the launch of the Dunlop MX52 and MX32 motocross tire. These tires have been a part of 62 wins over the past motocross season, but can that success translate to everyday riders?

The new Geomax MX32 and MX52 tires replace the old MX32, MX51, and MX71 models in Dunlop’s motocross tire range. The MX52 has a tread pattern that is a little more suited to intermediate and hard-packed terrain, while the MX32 is more geared toward soft conditions.

One of the biggest innovations that has helped achieve such success is Dunlop’s new block within a block design, is their Progressive Cornering Block Technology (PCBT). Through their extensive load testing, Dunlop found that the external portions of the knob carried all the pressure while the interiors bore almost none. Many of the motocross tire companies have played with the idea of cutouts within the blocks of the tires to help provide a more even contact patch while leaned over with little to no benefit. Dunlop found that, by elevating the interior of the block, they could design a tire that was still good at aggressive starts and straight-line performance while drastically improving the tire’s performance when leaned over.

Dunlop has also made advancements towards improved handling and knob durability by providing more flex which translates into less knob tearing. This has been achieved by the knob’s recess carcass design. They’ve also changed the rubber compounds in the sidewall slightly to provide better bump absorption.

We spent a day riding on both the MX32 and MX52 at Milestone MX Park in Riverside, California. We arrived early to a short briefing delivered by both the designers of the tire, as well as the head riders from Dunlop’s test track while the Dunlop race team fit our bikes with new Dunlop rubber.

I spent the first half of the day on the harder packed Veteran track, riding the MX52’s. These feature a center staggered block design on the front tire, which is supposed to help the tire absorb impacts, and the blocks on the rear tire are slightly larger while being spaced slightly closer together for increased surface area.

For the second half of the day, I tried my hand at the main track with the Suzuki RM-Z250 now fitted with the Geomax MX32 front and rear. While I definitely felt a difference between the two tires, I also felt like the worst person to ever ride a motorcycle compared to the press from dirt-centric magazines. Riding motocross is all about being fluid and gapping things correctly, something that’s really difficult if you’re fairly new to the sport.

Since I had just flown in the night before from The One Show in Portland, Oregon, I didn’t have time to go pick up a bike, Suzuki was kind enough to send staffer/all around bad ass Frankie Garcia out with a few bikes for us to test these tires with. Frankie used to be a test rider before he went to work for Suzuki and is good at everything on two wheels. Like, really good. We here at RideApart love off-road adventuring but, given that we’re fairly new to the dirt track – I’ll defer to his expertise.

These tires are really, really good. Even at my “I can’t jump more than 30 or so feet” level, the increase in control was evident.

The MX52’s gave me greatly improved lean angles and I could feel an extra little bite in corners where I’d normally be accustomed to none. The rear was equally as impressive. You could feel it connect, even on the harder surfaces of the freshly shaven Veteran track. It gave me more confidence because it gave me more control over regulating excessive wheel spin.

During the latter part of the day, Frankie was chopping it up on the main track with who he would later find out was Miguel Duhamel. Miguel is the winningest rider in AMA SuperSport and second winningest rider in AMA SuperBike who now spends most of his time schooling guys half his age on the motocross track or mountain bike trail. He also happens to be one of Frankie’s heroes.

Frankie pulled off the track at one point and began gushing about how well the improvements to the Geomax line translated to their feel on the track. The block on block design really helped in the loamy berms and front tire tracking. It took a minute, but I realized he was still riding the MX52’s at this point. 20 minutes later, with tires swapped and another four laps on the main track, Frankie pulled back over with a look of disbelief and said that the MX32 was far better than the tire he’d just been praising.

One more thing we should add: The entire 450 podium at Anaheim Supercross this year were MX32’s and Ryan Villapoto hasn’t raced a pro race on anything but MX32’s since he first got his hands on a prototype in Daytona last year. In the 2013 season, prototypes of the production Geomax MX32 and MX52 tires were used 187 podium appearances in AMA Pro Supercross and Motocross events.

In terms of riding on a motocross track, absolutely none. We’re sure that we’ll continue to see companies strive to make new breakthroughs in this arena, but we don’t think this tire does anything poorly or that any other tire does anything better.

We are curious to see what knob life is like and how the MX52 does in settings geared a little more in our wheelhouse. If this tire can keep up in terms of use, this could be a beast in the dirt tire arena. We can’t wait to get this tire out on the trail to see how it handles all of what nature has to throw it.

The Dunlop Geomax MX32 and MX52 and fantastic tires. The knob on knob design, paired with their new rubber compounds and knob placements, actually produce improvements that translate down to guys like us who love riding dirt tracks but are far from professional. We’re excited to dive deeper into what this tire can do.