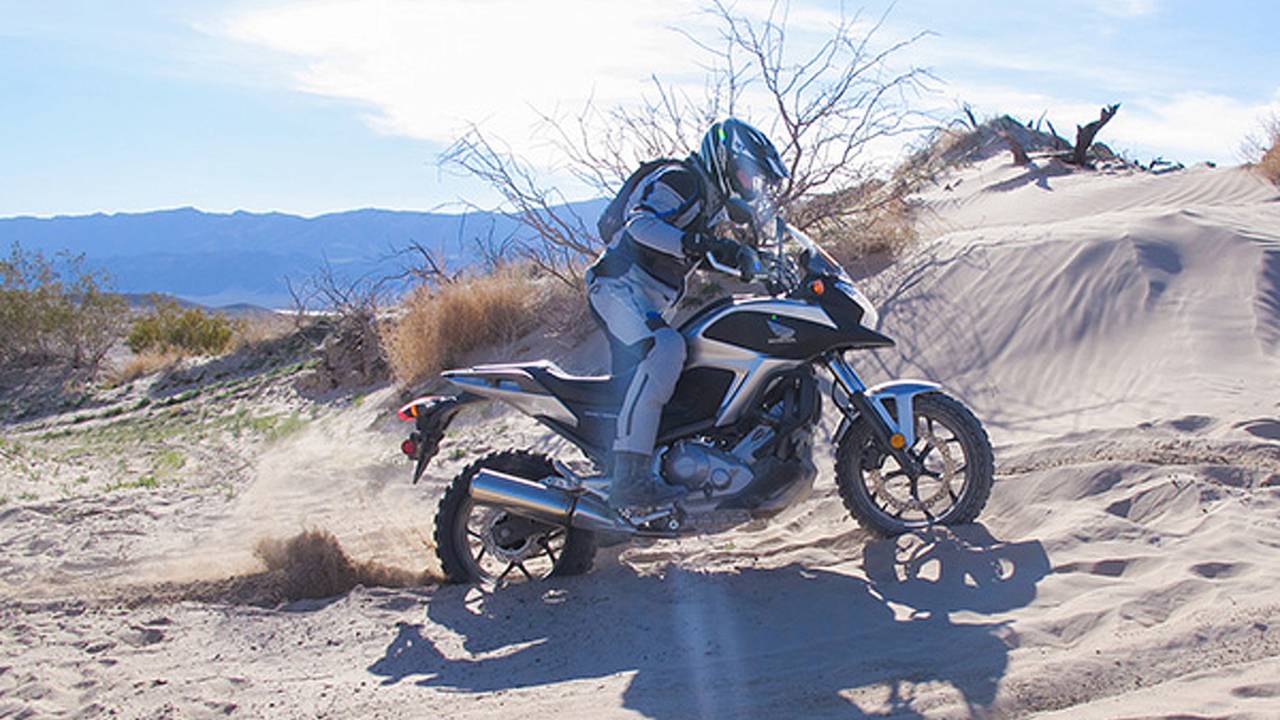 Since its launch in August, we’ve ridden the Honda NC700X on both street and track and come away impressed with its jack-of-all-trades ability. At just $7,499 and averaging 64 mpg, it’s one of the most practical, economical bikes there is. Not bad for something that shares its chassis and motor with a scooter. But, is the adventure-style bike capable of getting dirty? We just spent two days on it in the Nevada desert at AltRider’s Taste of Dakar and the answer is a definitive yes.

The NC700X is one iteration of Honda’s new modular platform that also sees the Integra maxi scooter, naked NC700S and even the new CTX700 cruisers share the same steel tube chassis and 48 bhp, 44lb.-ft., 670cc parallel-twin. They also all use the same, basic suspension, wheels and brakes.

All those are available with Honda’s newest dual-clutch transmission, but the model we’re riding here is the base version, sans DCT and ABS. Along with the CTX700, the NC700X is the only Integra-family model available in the U.S.

The NC’s specification is very basic. Forks are non-adjustable and right-way-up; there’s only one, sliding, two-piston caliper on the single front brake disc; the aluminum swingarm is a simple box-section affair supported by a shock with only preload adjustment.

Things get a little more clever in the engine department. The parallel-twin is essentially half a Honda Fit motor, its undersquare (longer stroke and narrower bore is the opposite of most performance motorcycle engines) bore and stroke reducing internal friction, but also leading to a redline of just 6,500 rpm, around half that of most other bikes of similar capacity. That engine’s cylinders, canted forward at 62 degrees, lay nearly flat, combining with the underseat fuel tank to drastically lower the center of gravity.

None of this sounds terribly adventuresome. Most bikes intended to carry you a long way from nowhere are overbuilt exercises in excess, huge engines powering the most intimidating German machines since WWII’s Panzers. A friend just emailed the phrase “adventure poser” when he heard I’d been riding the NC off road. Jimmy Lewis, a former Dakar racer who performed the rare feat of being American and finishing on the podium in that race dubbed it “the silver porpoise.”

Organized by Jimmy and aftermarket adventure parts company AltRider, the “Taste of Dakar” is an epic two-day event intended to give riders exactly that. It’s predominantly high speed off-road riding through the loose rock and deep sand of the Nevada desert, culminating in a spin around “Big Dune,” which is also exactly that.

It’s this kind of riding that most adventure riders dream about, but also the hardest test of their bikes. Any surface that’s both loose and deep presents real problems for heavy bikes like these. Add speed to that weight and you get a lot of momentum. If that momentum starts going the wrong way, you have a crash. In the Nevada desert, that’s likely onto sharp rocks or into a ravine or down the slope of a big dune.

There’s also climbs and descents and other technical obstacles that need to be negotiated at very low speed. Think walking pace. Again, doing so is very hard on a big, heavy bike, requiring fine control and minute balance.

Don’t believe me on the difficulty or the danger? An R1200GS rider shattered his femur in three places while practicing lofting the front wheel at 0mph. The cylinder head fell on his leg and he got a ride to Vegas Medical Center in a helicopter.

Shorn of its bodywork, the NC700X reveals just how low and centralized all its mechanical components are.

Strip the plastic off the NC and you can see just how low and centralized its mass is. Kinda looks like a big trials bike, right? Well, it feels like one too. While practicing low-speed control alongside other riders on everything from single-cylinder dirt bikes to the big KTMs and BMWs, the humble little Honda drew envious stares. Balance is so good and so easy, standing on it, both legs up, at 0mph, just comes naturally.

The engine’s Diesel-like character — most torque is just above idle, there’s no benefit to revving it out to the redline — also sees it simply drive over any obstacle you can throw at it. Even very steep, walking pace climbs can be tackled in 2nd or 3rd gear; the NC will just walk right up whatever you ask it to. It helps, too, that the fueling is completely smooth and hiccup free. You can get off the clutch as soon as you pull away, then just control everything with only the throttle until you decide to come to a dead stop.

That suspension that sounds so basic (just 5.4 inches of travel front and 5.9 rear), actually ends up being well damped. I was able to attack whoops in the sand and gravel at speed and, instead of bottoming out, the bike just floated over the top. In fact, I didn’t find the suspension’s stops once all weekend. Neither did I drag the low, exposed sump.

Those basic brakes, too, are strong, reassuring and capable. They deliver enough feel that I was able to lock the front wheel on command, with safety and ease. Or, just come to a commanding stop by keeping them on the threshold of locking.

By rotating the stock bars forwards, the NC also achieves perfect ergonomics for standing. At 6’ 2”, I was able to stand fully upright and comfortably. That was helped by the SW-Motech pegs provided by Twisted Throttle; they offered much more secure and comfortable footing than the stock, road-biased items.

The NC achieves that standability without erring towards on overly tall seat. At just 31 inches, the Honda’s seat height remains accessible to the vast majority of riders. The exact opposite of virtually every other adventure bike.

The Honda’s fuel economy and practicality also helped on the trip. Even off-road, the range from the 3.7 gallon tank remained in excess of 200 miles and the lockable cubby between your legs, where the tank normally goes, was perfect for hauling an extra gallon jerry can, plus photo equipment. That extra fuel was needed for the other bikes along on the ride, which sometimes struggled to top 60 miles between refills. We even worried the extra gallon may not be enough and planned to siphon fuel from the Honda if so.

Off-road, there’s two main concerns with the NC700X: its wheels and sump.

Those wheels are street-sized, 17-inch items made from cast aluminum. Most dirt wheels are 21 inches in diameter and made from much-stronger (but heavier) steel spokes and rims.

The sump hovers much closer to the ground than on other adventure bikes and no one makes a protection plate for it yet. The oil filter is also low and exposed on the front of the motor. A plastic shroud hides it, but offers little actual protection.

A set of Continental TKC80s went a long way to curing the wheel issue. They obviously don’t make that front any taller, but they do deliver commanding grip on pretty much any surface on-road or off. Airing them down from 36/42psi stock pressures to 27psi at both ends gave a reassuringly larger footprint while still offering protection for the wheels against impact. But, even with them fitted, I had to take it easy over obstacles like rocks and lips and the front didn’t deliver much confidence in deep rocks or sand.

My biggest moment came while crossing a gravely wash, as the wheels sank in, the bike skidded sideways, threatening to pitch me over when I hit the climb on the opposite side. Throwing my weight on the outside peg pulled the bike back straight just in time though.

Deep sand entering the dunes also defeated the 17-inch wheels, even with those TKC80s. The front just doesn’t deliver much control over direction in those conditions. At least at my moderate skill level.

Still, I was able to go everywhere Sean did on a DR-Z400S, just a little slower and more carefully. Even backing into and sliding out of corners, just again, with a little more care and a little less speed.

For off-road riding the radiator is a little exposed, wearing no cover and protruding from the sides of the frame. SW-Motech crash bars cure that problem and make the NC feel positively crashable, something we weren’t able to test, this time.

Perhaps the NC’s biggest problem is its lack of excitement though. While just competently doing whatever you ask of it sounds perfect to us, the lack of huge power or sexy graphics or fancy components fails to deliver a sense of “machine lust,” to quote Brammo, a company that worked hard to re-instill a feeling of the analog back into its electric sportsbike.

This is where the NC700X comes back into its own. Prices are up $500 for 2013, but at just $7,499, still deliver an unbelievable bargain. Compare that to the bikes it was equally capable to on Taste of Dakar: the $12,090 BMW F800GS, $15,800 R1200GS and even the $18,350 R1200GS Adventure. One of those BMW riders would inevitably wander over while walking off a sore knee or whatever from their latest fall, ask about the unscathed Honda, then hobble off looking distinctly sour after hearing the words “seven thousand bucks.”

Fuel economy is a factor here too. 64 mpg is equivalent to Honda’s own range of 250cc single-cylinder road bikes, just here with plenty of performance. Your fuel bills will feel like they disappear. On the 700 mile trip, I spent about $40 on gas.

The only fly in the ointment comes with the (not tested here) DCT/ABS package. By bundling the two together, Honda adds (in 2013) $1,000 to the bottom line. That ABS should come as standard, without requiring an expensive and unnecessary transmission.

“It's not the überpowerful or omnipotent bike of adolescent dreams, but with this impending era of two-wheeled functionality looming large, the Honda NC700X answers a whole lot of questions Americans never knew they had about modern motorcycles.” — Autoblog

“Judged on engine performance alone, then, the NC700X might seem a bit vanilla; but thanks in large part to its chassis, the Honda is a really fun bike to ride.” — Cycle World

“This is probably the easiest motorcycle available today to get on and just ride.” — MCN

“…the most friendly beginner mount on the market.” — Motorcycle-USA

“…finally giving a large number of riders a bike that suits their real world needs rather than conforming to the fantasy performance template forged by sports-oriented bike journalists.” — Kevin Ash

The NC700X isn’t the fastest motorcycle on the market. It’s not the sexiest either. Or even the cheapest or the most broadly-capable. Instead, it’s simply capable of going anywhere any other motorcycle can, at an affordable price, using very little fuel and excelling in practicality.

All-day comfort combines with outstanding control (thanks to that low center of gravity), low running costs and the ability to carry stuff with you to create a motorcycle that simply doesn’t need to be anything more than it already is. The perfect do-it-all bike for commuting, camping, hauling, trips, just having fun or even epic desert adventures. Or, all the above, in one affordable motorcycle.