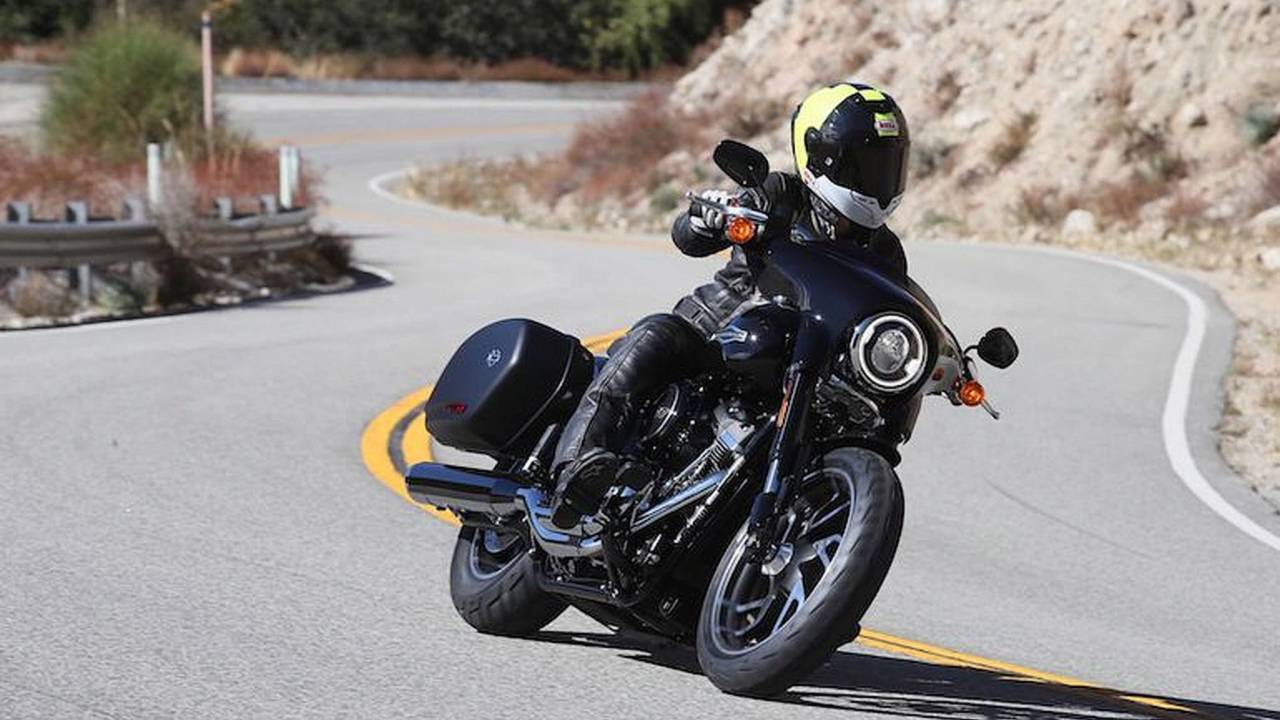 Laura Llovet gets to be one of the first to ride the 2018 Harley-Davidson Sport Glide. Did this one leave a better impression on her than the Forty-Eight?

I thought my Harley-Davidson days were over after I wrote a review of the Forty-Eight that was, perhaps, less than glowing. I figured that the H-D folks would have crossed me off their list of journalists to test ride their bikes. I was a lost cause, so move on.

Apparently I was wrong. Both RideApart Director Chris Cope and the H-D team wanted to give me another shot on one of the new Softails, a 2018 Sport Glide to be specific, and I was more than willing. To be honest, the Forty-Eight didn’t leave a bad taste in my mouth so much as it left a “meh” taste. It was my very first impression of a “real” Harley, and I was disappointed that I didn’t care for the bike that much. I hoped the resurrected 2018 Sport Glide had the potential to redeem my opinion of Harley-Davidsons.

That said, these bikes will never be as fun as riding a sport bike, so Harley doesn’t need to even try to throw that impression at folks like myself.

Or so I thought.

I found it interesting that Harley would throw the word “Sport” in its cruiser line up (Did I mention that I’m a H-D noob?), and I raised my eyebrows a touch when I read the press release"

Oh? OK, now I’m really interested in riding this thing. At that time, I was thinking: “Sure you can talk the talk, but can you walk the walk, Sir Sport Glide?”

Back in August, Harley released eight new Softail models and a handful of new touring bikes. It withheld the Sport Glide, though, as the company wanted to showcase it at EICMA earlier this month. As to why they did this, it was mainly to reach and appeal to the European audience. At present, the international market accounts for about 40 percent of Harley-Davidson's overall sales. The company is eager to push that closer to 50 percent. In order to continue to grow in that market, H-D did plenty of research, and the data showed it that the international folks wanted a functional bike they could use every day (I mean, who wouldn’t want that?).

H-D didn’t only focus on the European market with the Sport Glide, though, it also did research to see if it can appeal folks like myself: Millennial riders who haven’t thought of owning a Harley. You see, I had no idea how customizable Harleys are (H-D noob, remember?), and the Sport Glide was designed to give you all the possible options you could want in a bike: a street-commuting, canyon-carving, touring bike.

Just four moto-journalists were invited to ride the Sport Glide on the day it was unveiled. While everyone else was crowding around and taking pictures of the bike in Milan, myself and three others were firing it up in Azusa, California, for a thrash up to Mount Baldy in the San Gabriel Mountains. We were presented with three black Sport Glides, and a silver one. The first thing I noticed about the bike was the LED lighting, which gave the classic-style bike a bit more of a modern look. However, other than that, nothing really popped out at me aesthetically. It looks like a Harley, especially when you remove the windscreen/mini fairing and side panniers (which come stock on the Sport Glide).

But, I’m not the type of person who goes for bikes simply because of the way they look; it’s what’s on the inside that counts. I was ready to see if this bike had a bit of personality.

Pre-conceived Judgment No. 1: This Thing will Ride Like a Bus

As I mentioned earlier, I had A LOT of pre-conceived biases/judgments when approaching this bike. One of them was related to ergonomics, which was one of my bigger complaints about the Forty-Eight.

When I hopped on the bike, one the first thing I noticed was the controls. Just like the Forty-Eight, each handle bar control cluster has a button that operates the self-cancelling turn signals. I also noticed that the single gauge is mounted on the 5 US gallon tank (18.9 liters) – as opposed to on the handlebars or in a permanent fairing mount – and gives you information like RPM, time, fuel level, etc. The other thing that I thought was pretty neat was the keyless ignition system. Throw the key fob in your jacket and you're able to start the bike up with the push of a button.

It also has a self-setting alarm, which activates when you walk away with the key, and cruise control. If I had to pick one word to describe these features it would be "luxurious." I’ve never ridden a bike with all these features before.

The second thing I noticed was how well the bike fit me. It's difficult to say more than that: it just fit. When I took it off the kickstand, it felt perfectly fine, not overly heavy at all. What helped with the weight was the low, 25.7-inch seat height. Also, the bike has a narrower primary drive and shorter swingarm, which made throwing a leg over it even easier.

Taking off was easy, too, since this time around I was familiar with the Harley riding position from my time with Dorothy (the nickname I gave the Forty-Eight I rode). The Sport Glide is an easy bike to control: the clutch and brake controls were easy to reach and the mirrors placed perfectly. Overall, I was pleased; this bike was a breeze to maneuver around city streets.

Pre-conceived Judgment No. 2: The Engine Won’t be Exciting

I figured the engines in these bikes wouldn’t really provide an exciting ride. Adding to that concern was knowledge of the famous Harley rumble; the Milwaukee manufacturer ensures that its engines have a certain amount of "character" that you can feel when sitting at a stoplight. My last ride on a Harley involved a lot of shaking, and I wasn’t a fan. The Milwaukee Eight-powered Sport Glide's vibration, though, did not annoy me (hallelujah!). But how can this be? For the Softail line-up H-D added tuned dual counter-balancers to get rid of primary vibration at idle.

At this point, I was very content as I had a bike that fit me well and didn't aggressively vibrate while riding or at idle. How could this get this better? By getting on the throttle and having the thing take off, of course. With just a small twist of the wrist, the Sport Glide lurches forward thanks to its Milwaukee Eight 107 engine with 108 ft-lb of torque. That small movement produced a big smile.

As we headed toward the glorious Mount Baldy, I was worried: would this bike be able to handle the curves? So far, it didn’t feel like riding a tractor, but I didn’t trust it.

Thankfully, the first section of our ride featured broad sweepers that the Sport Glide handled splendidly. Hitting the apexes on these types of turns was no problem, which made for a super fun ride. I knew that things were going to get technical soon, though, so I mentally prepared. I shouldn't have worried, though; I think the bike handled the corners better than I did.

As we went up through tighter bends the bike shifted and turned just fine. There were a few times where I botched my entry, but, fortunately, the bike handled my mistakes as best it could. For that I was very grateful. I think you’re on to something here, Harley…

Pre-conceived Judgment No. 4: Going Over Bumps is Going to Suck

The Sport Glide has a pretty stiff chassis due to the rigid-mounted engine. This, along with the non-adjustable 43mm inverted forks, makes for a good front end feel while going through the corners. Even though the Sport Glide has a single disc front brake — which doesn’t provide enough braking power if you’re bombing into a corner — adding the rear brake is enough to get the bike to slow down when need be.

As for the rear suspension, the Sport Glide is equipped with an all-new monoshock with remote hydraulic pre-load adjustment. You can set it using a knob below the right-side cover of the bike, which is extremely convenient. Prior to getting on the one chosen for me, Director of Product Planning Paul James set its suspension to the lowest setting. Combined with decent front suspension, this helped settle the bike when I hit some rough pavement. I was bracing myself for the teeth-chattering thud I thought I would encounter, but the Sport Glide smoothed those out surprisingly well.

Pre-conceived Judgement No. 5: I Would Never Consider Buying a Harley

We rode for a total of 80-ish miles up and down Mount Baldy before calling it a day. As we rolled into the parking lot, I had a number of good and confusing feelings happening all at once. I mean, I was never out to hate this bike, but I was actually a bit surprised that I liked it as much as I did.

READ MORE: Tennessee, a '33 Harley, and Me| RideApart

When I first heard the price — US $18,599 for Vivid Black, and $18,999 for the Twisted Cherry and Silver Fortune — I thought that was steep. But again, it was a pre-judgment. After riding the new Sport Glide, I can see reason for the high price tag: it’s a bike you can ride any way you like. It’s also a bike with which you can replace a car if you feel so compelled. With its side bags, spacious rear, soft seat, and decent-sized gas tank, you can go a whole lot of places; and it can handle bumpy city streets or smooth canyon roads with equal aplomb.

When my husband picked me up from the airport afterward, he asked what I thought about the bike. I told him and he seemed surprised as well (he’s also a sportbike rider and racer). I even exclaimed: “Maybe I’ll get a Harley one of these days!”

That's a little unfair. I’d consider one sooner than retirement age (did I really just write that?). But even if I don’t buy one, I’m eager to kick my leg over other H-Ds as soon as possible. Obviously the Sport Glide isn’t a sport bike, but it’s a cruiser that kind of makes you feel like you are riding the former, and that sure did leave a mark on me.

Come at me Harley, I’m ready to scrape some pegs on the next one.