Back to School on a Honda Forza - A RideApart Newbie Review 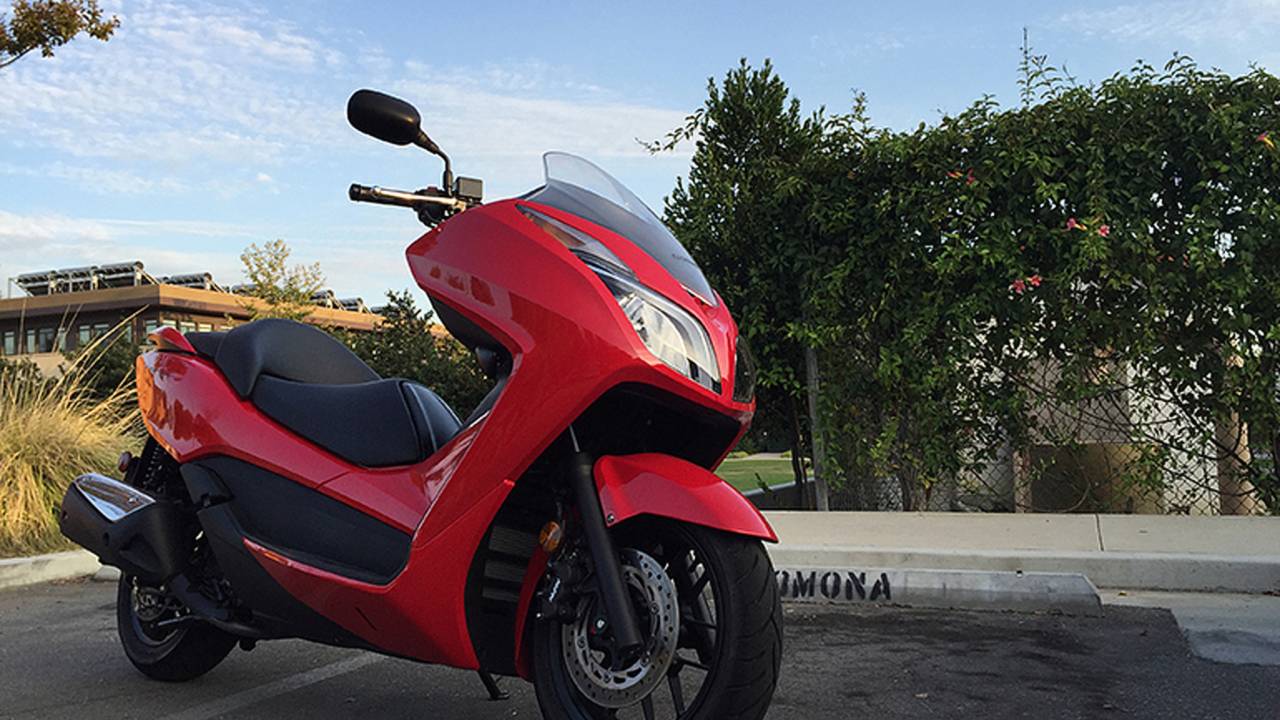 Review of the 2014 Honda Forza – a great bike for a college kid. We put the Froza to the test for all on-campus needs: parking, storage, gas milage.

I’ll admit that initially I wasn’t too excited for this. In a true 21-year-old-who-just-got-her-motorcycle-license fashion, I wanted a motorcycle—gears, clutch, everything. So when I was told I got assigned to review the Honda Forza, I wasn’t stoked. .

READ MORE: The Case For and Against the Urban Scooter | RideApart

Of course, once I drove it home, it dawned on me that I was just being an ass for nothing. This thing is actually pretty sweet...well a great bike for a college kid, at least.

First, a simple rundown. The Forza is a 'maxi scooter,' meaning it's got more of a kick than your traditional scoots. It's 279cc engine is a single cylinder four-stroke, and a serious compression ration of 10.5:1. The engine may seem small in the US, but overseas in countries like India, 300cc's is big. It also has fork front suspension and twin shock rear suspension with CBS braking (for all the specs, visit Honda’s site.) It's basically a motorcycle with your feet in between and no clutch lever.

. In Los Angeles’ Inland Empire, that means 50+ mph during low traffic hours (Oops! I mean 45 mph or below, officer). And it didn’t take long to get the bike up to that speed.

That shouldn’t be too surprising, given its got a 279cc engine, and the dashboard tells me I averaged around 60 mpg. In general, I wouldn’t recommend taking the Forza over 55 mph too often, but it can handle any speed under that pretty consistently. The small, 14-inch and 13-inch (front and rear respectively) tires are a major limiting factor in speed comfort over 55mph. But the long wheelbase of 60 inches makes the scooter track straight.

It worked great for back-to-school errands, and I loved how easy it was to park. Just a little bit wider than your average 250cc motorcycle and a touch heavier at 422 pounds (for reference the CB300F weighs 348 pounds), the Forza can fit pretty much anywhere. It’s now the only vehicle I’m willing to use during the day—that’s when all the campus parking spots are full, and I know I can find a place for this thing anywhere.

The scooter is surprisingly heavy, but with the low seat height of 28.2 inches and a short throw for my feet from the floorboard to the ground, it makes the weight relatively unnoticeable.

I do have one critique: The ignition was tricky to get used to. It sounds minor, but it became a major inconvenience. At first I thought I broke it. Turns out when they say ‘hold the brake’ then press start, they mean wrench in the hand break. I guess it’s Honda’s way of making sure the rider is in full control before they start the scooter—that part could have been a little clearer. But once I got the hang of it, the scooter started up nicely every time. It’s also worth noting that the engine hums in a way that’s surprisingly satisfying for an automatic.

Honda knows how to make an automatic motorcycle, (a thought bubble of the Africa Twin just appeared above your head didn't it?).This one's got a V-matic, belt-converter transmission, not the DCT like the Africa Twin's offerings, but it shifted hard and fast similar to the DCT. Most of the time shifts were unnoticeable, but simply kept the momentum of speed.

I wanted to add some pizazz to an otherwise potentially boring review for you all, so I climbed half way up Mt. Baldy in Glendale, CA. The mountain is nothing too special, but it’s really close to school so I thought it was a great opportunity. The scooter wasn’t too happy to be going so uphill, but it was truckin’ right along. Unfortunately, when I got to my third lookout point, I pulled off the road and…I’ll save the story for another day. If you want more details on the slide, check out my next piece. For now, I’ll focus on the Forza.

Here’s the bike after the skid. Still alive as ever.

When the bike started back up again, I gained a new appreciation for it. There was no hesitation. No push back. Turns out, the Honda Forza is a really robust machine. I’m impressed, (that being said, I wouldn’t recommend it as a dirt bike).

The Forza even had perks I wasn’t expecting. After surviving my first slide, I decided I deserved a beer, or six (not while riding, OF COURSE.) So I went to the liquor store at the bottom of the hill and bought a six-pack. I had no bag to put it in. Not a problem with the Forza. And that’s when this bike really passed every test I could put it through.

READ MORE: Is it a Scooter or Motorcycle? We Ride the Honda NM-4 | RideApart