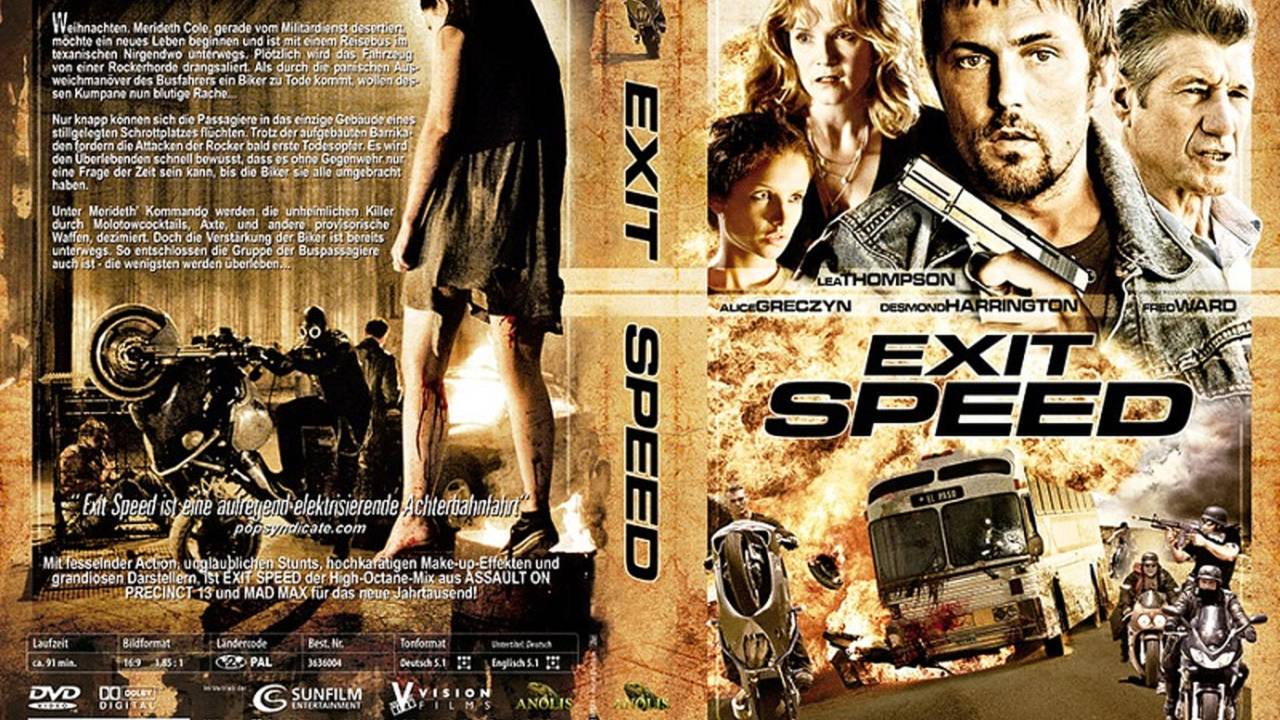 Will they get home in time for Christmas? Why is there no cellular service anywhere in Texas? Exit Speed may or may not have the answers.

I've been wanting to start a regular movie review piece for RideApart for a while now, and only because of the holidays this week have I had the time to waste. Luckily, I found a obscure movie featuring bikes that takes place near Christmas, so it's a perfect subject: Exit Speed (2008). This movie can be streamed via Amazon, so if you get bored and you are stuck somewhere with family, it should be readily available.

This is an ark movie, and if you've seen Stagecoach, Speed or Airplane, you pretty much know the drill—a ragtag group of strangers traveling together must learn to put aside their differences and work as a team to survive. In this movie—like in Speed—they are all on a bus. The adversity they have to overcome is a bunch of homicidal, meth smoking stunters on beat up sportbikes. I hate to see bikers cast as the bad guys, but in this case, at least it seems like they hired actual stunters using their own bikes, and possibly smoking their own drugs (I'm not judging). All I'm saying is that these guys look legit, not like the typical Hollywood folks.

Julie Mond stars as a corporal AWOL from the army, for reasons never really explained. She is also the daughter of a senator, though that is never important either. The only thing you're likely to recognize her from is a recurring General Hospital role from 2009.

You will, however, recognize Fred Ward as the Army bounty hunter who is after her. How could you miss the man who played Lyle Swann in the greatest time travel adventure bike movie of all time?: Time Rider It's on YouTube in its entirety here.

Also appearing in a supporting role, as a single mother and cancer survivor with a never-say-die attitude, is Leah Thompson (she's basically the Shelly Winters of this movie), though she is lacking the charm she had when she tried to seduce her own son Marty, or the three-foot duck.

Leah and one lucky duck.

Regardless, the bikers force this bus, full of regular folks trying to get home for Christmas, off the road and they end up stuck in a derelict junk yard. Luckily, among the passengers are a LARPer (Live Action Roll Playing) who is an expert archer on her way to an event, a Mexican handyman who speaks no English but can Mister T weapons out of random junk, several others with useful skills, and our AWOL lady soldier. It seems they are trapped at the mercy of the hopped up stunters as night falls, but the bikers decide to party and not attack until daybreak.

Unbeknownst to the bad guys, the passengers are not helpless, and they have an ace up their sleeves. It seems Leah is a fun run enthusiast and there is a major highway not too far off. Can she make it in time and bring back help? Or will evil prevail?

Will the bus passengers get home in time for Christmas dinner? Who is that fat guy in the cage with the ball gag? Why is there no cell phone service in all of Texas? Some of these questions will be answered, many will not in the 90 minutes you waste watching this.

Redeeming Quality: A modern bike gang that more closely reflects reality, probably because they are just real stunters and riders acting, not actors trying to ride.

And this one guy in the black tank top seems to go through the whole movie without sitting on his bike for more than a few seconds:

Regrettable Moments: For some reason a small sailboat at the junk yard explodes like it was being used to store roman candles. On several occasions sportbikes suddenly become much smaller and have wire wheels just before a jump or crash.