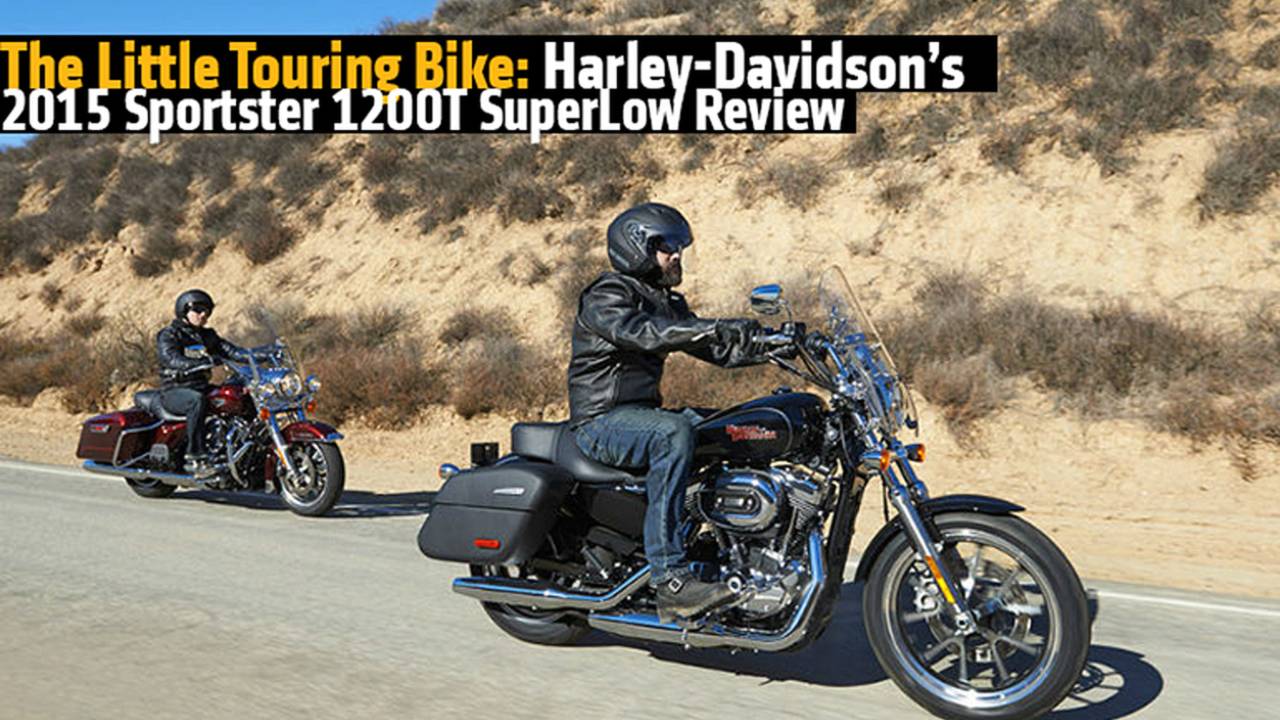 I’ll admit to an embarrassing truth right at the start: I’m a Harley noob. Prior to this Sportster, my riding experience has been limited to an odd collection of Japanese standards (I've been a long-time owner of a 700cc Honda Shadow.) I’d ridden a cast-iron 883 Sportster, once, on a demo ride at Mid-Ohio’s Vintage Motorcycle Days more than a dozen years ago. My only recollection was that it felt heavier than I expected.

I’ll also admit that with its as-tested price of more than $13,000, this 2015 Harley Davidson Sportser 1200T SuperLow is the most expensive motorcycle I’ve ridden – a fact that played repeatedly in my head as I mounted the bike and prepared to drive away from Harley’s SoCal distribution center. Given my impression from that long-ago demo ride, thirteen thousand dollar signs floated in my head, followed by an urgent “don’t drop this heavy thing.” Thankfully my initial fear was immediately eased as soon as I left the premises, as this Sportster was incredibly comfortable and easy to ride.

At a passing glance, one would be forgiven for thinking this model was a Big Twin, especially when the large 4.5-gallon gas tank dominates the upper half of the bike. I had to actively seek out the oil filter location and shape of the primary drive to realize it is, in fact, a Sportster. Overall, I loved its appearance, especially in H-D’s new for 2015 Superior Blue.

Not much has changed with the Sportster’s 1200 cc Evolution engine, but that’s not a bad thing. Harley’s fuel injection mapping is spot-on in all conditions from cold-starts to wide-open, uphill blasts. Churning out a stout 71 lb-ft of torque at just 3,500 rpm, the engine feels like a big American V8 – lots of power down low, but that power falls off quickly once the revs climb past about 5,000 rpm. Even so, when the engine runs out of steam, shifting up a gear delivers another wave of torque. The gear ratios are well spaced and the final drive is low enough for effortless freeway cruising and respectable fuel economy, which is rated at a combined 48 mpg. The five-speed transmission shifts with authority, too. Each gear change is announced with a solid and reassuring thunk. You’ll hardly ever miss a shift on this bike.

The controls are all well-placed and intuitive to use. Although it took me a couple of trips to get used to Harley’s self-cancelling turn signal switches (one on each hand grip), I found myself missing them after getting on another bike. The shape of Harley’s clutch and brake levers are also noteworthy. Their broad, flat midsection spreads the force out across a greater area of your fingers, making the clutch feel very light and easy to actuate, especially on long rides. As a person who likes gauges, I was pleased to find the digital display within the speedometer can toggle between showing mileage or engine speed and a gear indicator.

Braking is handled by single, 300mm front and rear cross-drilled rotors, which are gripped by dual piston calipers. Our bike was equipped with ABS, which is a $795 option, though I never had any occasion to use it. The brakes are up to task, but I would have liked a bit more bite to the pads. Otherwise, the controls are easy to modulate, and braking action is progressive. The ride is firm and solid, but never felt harsh thanks in part to the nitrogen-charged rear emulsion shocks.

The left shock has a large preload adjustment knob that you can reach while seated in the riding position, allowing you to make adjustments while waiting at a stop light should you feel the need. I dialed it back to the least amount of preload, and the ride was comfortable, even over some of Los Angeles’ most neglected roads.

Touring equipment on the 1200T includes the quick-disconnect windscreen and saddle bags. Having never ridden a bike with a windscreen or full fairing, the effect felt odd. In its wake, the screen leaves a slight breeze you can feel on your chest, which is beneficial at freeway speeds, but I didn’t like the vortex of wind it generated at the top of my helmet. A quartet of ingenious little clamps hold the screen to the fork, so removing and replacing it takes but a few seconds, and I ended up taking the thing off for the duration of my stint with the Sportster.

The saddlebags are a worthy addition, with an excellent fit and finish. They were wide enough to swallow my laptop computer, so I didn’t have to ride to work wearing a backpack, which makes me exceedingly happy. The locking lids meant I could carry valuables like photo equipment to shoots and have some piece of mind that they are a deterrent, at least, which is usually enough to keep all but the most determined thieves away. Though not as easy to detach as the windscreen, the bags come off with simple hand tools.

While reading reviews of the 1200T SuperLow on various other outlets, one common complaint is focused on the foot peg/boards. Described by H-D as “mini footboards,” they are the size and shape of the pedals on your old Schwinn, and were constantly in the way as I raised and lowered my feet. Their broad-shouldered girth also contributes to the 1200T having a lean angle about five degrees less than regular Sportsters. Though I never threw this bike into peg-scraping corners, other reviewers have, and several lamented the killjoy effect of these spark-shooting footboards. On the upside, their mid-mounted location was suited my average-sized inseam, and the overall riding position was very comfortable to me. In time, you would learn to maneuver your legs around the footboards, but were this my bike, I’d replace those boards with regular foot pegs.

At 600-pounds ready-to-ride, the Sportster 1200T is heavier than my old Shadow, but the 25-inch saddle height (a full five inches lower than my Shadow) makes that bit of extra heft totally manageable at low speeds. Anything faster than parking lot speeds, the bike feels as solid and reassuring as a bank vault.

Overall, I believe Harley-Davidson got it right with the 1200T. They combined touring accessories on the compact, nimble Sportster chassis and created a capable, well-rounded machine you could ride to work during the week, and across the state on the weekend. Though the price of entry is steep, you probably couldn’t build a new one for less, at least not one equipped with the 1200T’s well-engineered factory accessories.