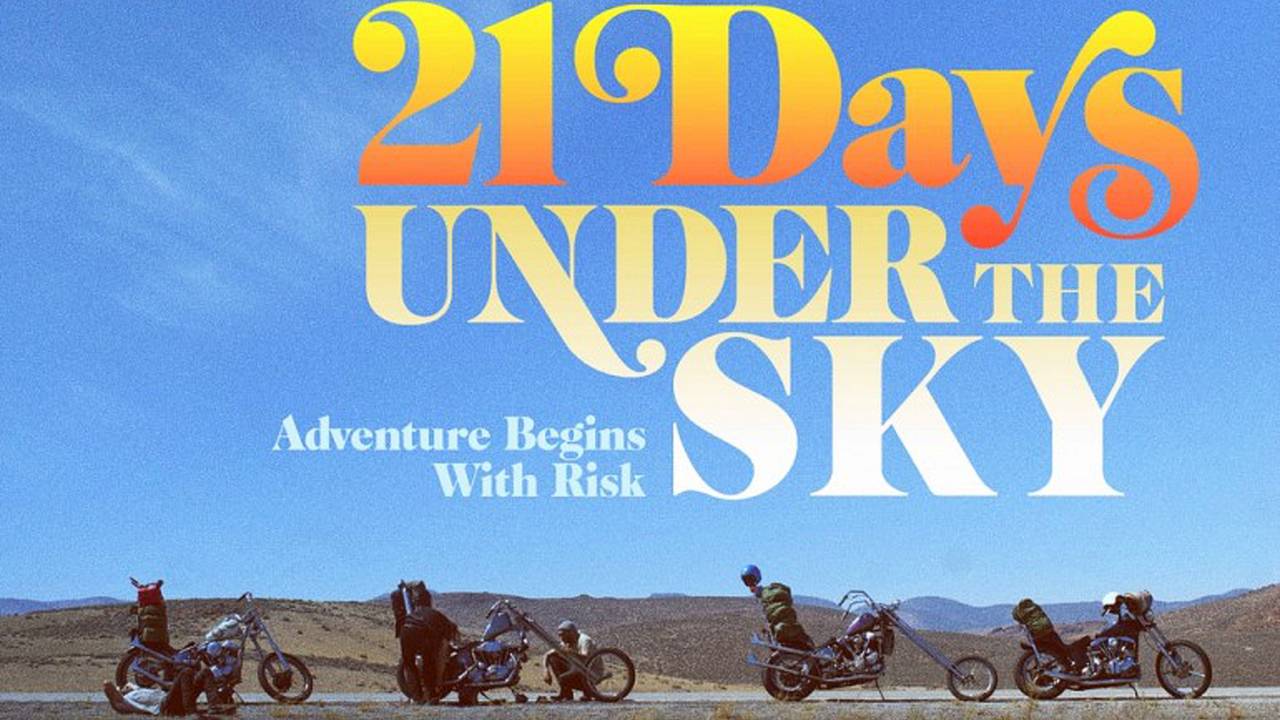 Four guys on choppers against the great wide open

Here at the Moto Movie Review I'm usually reviewing moldy artifacts and curiosities from days gone by. Let's face it, there are not all that many motorcycle focused films made every year, and the romance of the biker has mostly subsided. Last night, however, the miracle algorithms (I believe that is a fancy word for the little fairies in the machines) at Netflix came through and delivered to me 21 Days Under the Sky, and movie so new the IMDB page for it is blank. What is it? It is pretty much just a modern day cross between Easy Rider (1969) and Cycles South (1971); four guys on choppers against the great wide open.

It is a documentary, much like Cycles South, (or perhaps I should say a "reality movie"?) that follows these four friends across the country from San Francisco to the Brooklyn Invitational Motorcycle Show. Why call it a "reality movie"? Because some of the tensions seem as manufactured as those you see on Survivor. Perhaps the perfect example being this image.

One of the guys sits at home plotting the route on an old paper road map, and indicates a spot where he thinks there is no gas available. How would he know that? Oh yeah, because this was in 2015 and he could research the entire route on his smartphone, or home computer, looking for gas stations, and also touch base with other local bikers all over the country. They also make it a point to mention that these bikes only hold a few gallons of gas each, as if these were the only bikes they could have possibly ridden, and they couldn't have fitted slightly larger tanks on them for the trip. But I'll tell you, I did this trip in 1995, with no cell phone and no advance route planning and there is barely anywhere in the country left that is more than 80 miles between gas stops. And don't forget, these four guys were being followed around by a camera crew. The most dramatic moment for me was when Ryan Grossman overloaded his bike and it almost fell over.

The filmmakers toss in some character development to help us understand that these guys are not just dirty bikers, they are guys who choose to follow a dirty biker lifestyle.

For the sake of adventure and romance, and better pictures, they eschew the interstates and follow the old Lincoln Highway. Of course, anyone who knows highways knows that Route 66 is way too commercial, and the Lincoln Highway is the more authentic highway to travel on. And they were totally into it before any of you, too. You may have guessed by now, just 15 minutes into a 75 minute movie I had already decided I hated the characters. Though I would have been down to follow the adventures of four wannabe, hipster, low brow bikers for the whole movie, if it hadn't been for the voice over.

The narration is ever present, and sounds like what Jack Kerouac might have written if he was more into Robo tripping and less into amphetamines, and it is read very seriously by the T-1000, Robert Patrick. The whole thing starts "...put more down, and think far less. Get over the finer details and do one frivolous no good thing, one nothing more than the idea of it. Forget the words adventure, epic, legend; ban them from the present life you lead. For it doesn't start as an adventure, it begins with a risk." to which I said, whaaaaaa?!? Seriously, it is as if someone accidentally handed Robert Patrick Walt Whitman's Leaves of Grass instead of the script to a motorcycle documentary.

21 Days Under the Sky - Full Trailer from Fox Digital Studio Group on Vimeo.

So I did a little digging, and it seems the whole project was created by "famed motorcycle lifestyle photographer (Michael Schmidt)" with the narration written by a "poet and journalist (Kate O'Connor Morris)," and now I feel really bad about making fun of them. It's just that they are taking this subject matter oh, so seriously, when admittedly (by the people in this movie even) the whole point is to be having fun. The reason all those bad old biker movies work is because they are not taking themselves 100% seriously. The reason On Any Sunday was such a hit is because of the humor involved, wrapped around the very real danger of racing motorcycles. If you want to see a movie about choppers and customs, without so much super seriousness, check out Choppertown: The Sinners, which you can rent online from a number of places, and a clip of which is here:

Rotten Tomato Rating: Not even a blip yet.

RideApart Worth Watching: It's only 75 minutes long and better than "O.C. Choppers."

Redeeming Quality:  I have to reach here, but it is a new movie about bikes, made by people who are very passionate about something, outlaw biker cosplay I think. So yes, if you are bored.

Thing to watch for: Honestly, you know what would be fun? Watch it, but listen carefully, and post the most ridiculous bit of narration, or dialog in the comments below.

Here's just a bit that stuck in my mind "...Bonneville. The aerodynamics of the salt flats alone made your bike move at mythical speeds." Which would be news to all the guys out there trying to go fast, but it is supremely ridiculous when spoken over this scene.

And things are no less bad when they let the guys just talk for themselves, and they say things like "I don't know what it is about the feel of the bike, but there is a certain range of power that you're in, and it just feel so nice. I don't know... It's not even about the speed you are going, you could be doing 75 mph and the way the motor feels at that range, it feels, eh, its kind of an indescribable feeling..." You can only imagine the stuff they cut out.

The good news is that you can watch it on Netflix, which is where I saw it last night, just by clicking here: 21 Days Under the Sky. Or, if you are in the L.A. area, and have not been soured on it by me, you can go see it along with the cast and crew at the Theater at the Ace Hotel on May 1st. WITH A SNEAK PEAK OF 82 MINUTES OF BONUS FOOTAGE!!!

Will I be there? Are you kidding? I'm not stupid enough to trash talk a group of bikers, or even wannabe bikers, online and then go to one of their events. I mean, my name and face are right here in my bio. I will however be at Willow Springs next weekend, and we should be screening movies in the pits Saturday night.