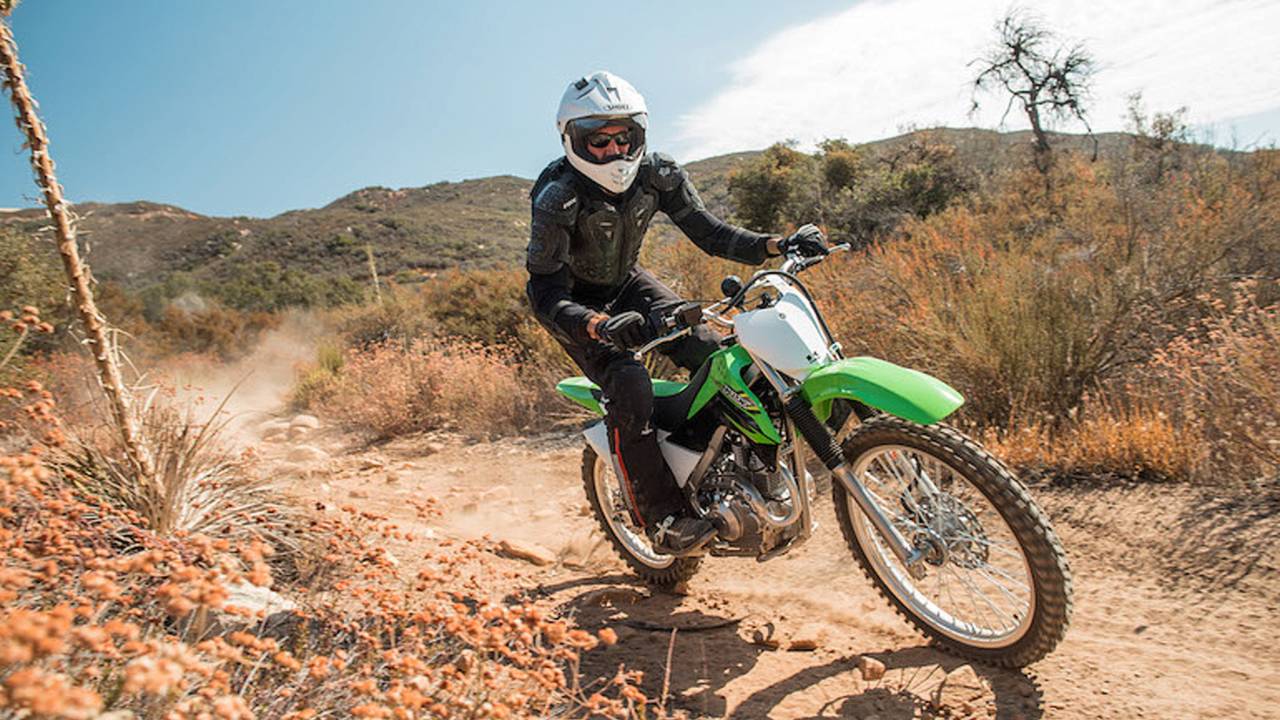 2017 Kawasaki KLX140G – First RideHow to be a Badass on a Tiny Bike Last week I was reminded of a very important lesson: there is no correlation...

How to be a Badass on a Tiny Bike

Last week I was reminded of a very important lesson: there is no correlation between the size of the motorcycle and the amount of fun that one can have on it. The new Kawasaki KLX140G is the mighty little bike that I give the credit.

Let me first start off by acknowledging that if you ride with your family, you are a badass. Your children think you’re a badass. They probably only know of three famous motorcycle riders: Malcolm Smith, Valentino Rossi, and their daddy…

But, A badass does not ride a tiny bike like the Kawasaki KLX140G…

If your kids are like mine, they are always itching to ride, too. I love that they want to continue to learn to ride motorcycles, and I’m honored to teach them. But the last time I went riding with my 5-year-old son and 7-year-old daughter, I ran into a unique problem: I found that I needed to putt around them as they negotiated the trail while listening to my instructions along the way. I was sure not to go too fast, and certainly no shenanigans (well, maybe a few), but my high-strung 450 –– which is perfect for rips in the desert or trails with my riding buddies –– was just too difficult to manage with the pace set by the kids.

My bike was coughing and sputtering and stalling just trying to go slow enough to stay connected with them. My clutch hand was cramping and it wasn’t much fun. Occasionally I would ride ahead a bit to shake out the cobwebs and stretch the bike’s legs, but I was left with the feeling of not being on a bike suitable to having a little fun without isolating the younger, newer riders behind me. Some of the other guys I ride with on their rocket 250s shared the same frustration of riding with their young ones, as well.

So, back to last week, when I was asked to ride and review the all-new Kawasaki KLX140G trail bike in the pristine hills and trails of Wildomar OHV Area, in Southern California's Cleveland National Forest.

Kawasaki has created with the KLX family a purpose-built line that emphasizes the importance of a bike that’s easy to ride but hopefully, not boring.

A badass is never boring...

I usually ride a big GS or a 450 four-stroke for the single-track trails, and although I have a lot of miles riding off-road, the KLX140G would not be on the top of my list. Would not have been, I should say. It is described as an adult-sized trail bike with an upgraded suspension able to handle full-size off road wheels (21-inch front, 18-inch rear) and the weight of an adult rider.

Wait? Only 140cc for a full-sized dirt bike?! I didn’t think I would be interested in the KLX, to be honest, and I wasn't expecting too much from the engine right out of the gate. But, as I later discovered, a badass must admit when he’s wrong...

I could go on with a spec-sheet analysis and comparison of the new Kawasaki KLX140G, but I think that would be a waste of your attention. That info is available from Kawasaki's website. But I don’t think that that data would completely represent the strengths of the mighty KLX. Moreover, after riding it today I can see why this bike would make a lot of sense to a large segment of people who want an unintimidating, reliable, versatile platform that can accommodate a wide variety of riders’ sizes and skillsets.

Its unmatched lightness and familiar wheel size make it remarkably nimble on the trail. It’s placid enough for close family fun, while the chassis maintains its composure when you want to wind up the pace. And it’s worth mentioning: if you’re familiar with the mini bike craze such as the Honda Grom or the Kawasaki Z125 for the street –– surprisingly powerful and nimble machines begging for aftermarket customization –– then you’ll see the appeal and potential of the KLX140G on the dirt.

Which would be really badass…

The KLX's forgiving nature makes it an easy bike to learn (or teach) on, with its progressive feather-light clutch. Or it can act as a capable and fun trail-bike strapped to an RV for spirited exploring once you’ve set up camp.

I assume you camp, because you’re a badass…

The KLX is worthy of a nod by both the novice rider and the seasoned off-road veteran for the same reasons: it’s a light, fast, inexpensive, and reliable bike that offers big fun right out of the box.

*Big thanks to all the folks at Kawasaki and the good people with the U.S. Forest Service who faithfully secure and protect the future of our prime OHV riding areas. They are definitely badass...